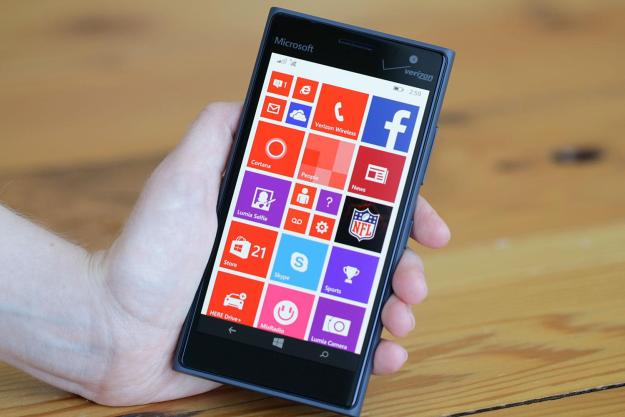 “The Microsoft Lumia 735 offers a great customizable design and impressive battery life on a budget, but other phones can do more for your money.”

The Microsoft Lumia 735 has finally made its way to the U.S. as a Verizon Wireless exclusive. Back in 2014 when it first launched, it was one of the last Nokia-branded Lumia phones. It has now been re-branded to Microsoft, following the completion of the company’s buyout of Nokia.

Unfortunately for Windows phone fans, the Lumia 735 is another mid-range device, priced competitively at $192 or $8 per month for 24 months. But is it worth your money?

Editor’s Note: Robert is an avid Android user. This is the first time he’s used a Windows phone for any period of time. As such, this review reflects not just this particular phone but the experience anyone might have moving from Android or iOS to Windows Phone.

The Lumia 735 looks a lot like other Windows phones with its straight corners and rounded edges. The polycaronbonate back is removable, giving you the ability to easily swap it for another color. It’s not your normal removable back, either ,since it includes the sides of the phone as well. At first glance, you would have no idea that it’s removable, and it just might be the best implementation of a removable back I’ve ever seen.

Underneath the back cover is the SIM slot, MicroSD slot, and removable battery. The back cover itself houses a Qi wireless charging plate, which is a pretty nice option in a phone at this price point.

The Microsoft Lumia 735 offers a great customizable design and impressive battery life on a budget, but other phones can do more for your money.

At 4.7 inches, the Lumia 735 might be considered tiny by some. While bigger displays are more in demand, 4.7 inches is the sweet spot for comfort and one-handed operation. Unfortunately, the phone does have larger bezels at the top and bottom of the display, which make it a little bigger than it really needs to be.

The phone feels solid for the money, and the ability to customize it with different colors is a nice touch.

The Lumia 735 launched back in 2014, so you can’t expect it to sport the most up-to-date specs. It’s powered by a 1.2-GHz quad-core Snapdragon 400, which is what powers most Android Wear smartwatches. Couple that with 1GB of RAM, and this phone is far from a powerhouse. However, it’s more than adequate for the casual user looking to just text, read emails, browse the Web, and update Facebook status. The Windows software moves without hiccups since it requires limited power, but you can forget about high-end gaming.

There’s 16GB of internal storage, which is above the norm for this price point, plus you can add up to an additional 128GB via the MicroSD slot if that’s not enough.

The 2,220mAh removable battery is one of the highlights of this phone. I ran my usual video rundown test, in which I loop continuous video while the phone is connected to 4G LTE and the display set to medium. The Lumia 735 was able to last 11 hours and 17 minutes, which is impressive to say the least.

However, we do understand that your normal usage won’t be running constant video, so how does this translate to your average day? With moderate use, you will have no issue going from morning to bedtime, and then some. It will easily last 20 to 24 hours on one charge, which is almost double what the Galaxy S6 can offer.

The rear 6.7-megapixel camera is pretty low by today’s standards, but higher megapixels doesn’t necessarily mean better photos. Still, this is a mid-range phone, so you can’t expect flagship performance. With that said, I found the camera to be on par or better than most mid-range Android phones. The colors aren’t always accurate and low light shots include some noise.

Microsoft’s software does allow for some decent editing options such as cropping and adjusting blur, temperature, clarity, brightness, shadows, and vibrance. You can also choose from 14 different filters to apply.

Another feature called Living Photos makes a short (a couple of seconds) video just before you capture a photo. These “Living” videos are played every time you view a photo giving it a more “emotional” look. This is very similar to Apple’s new Live Photos feature found on the iPhone 6S and 6S Plus.

Storyteller is another app, and it groups photos, videos, and Living Photos by event. It’s similar to Google Stories in that you can create slideshows with captions for each photo.

Microsoft added a wide-angle 5-megapixel shooter at the front, which was a little ahead of its time 9 months ago, but not so much today. We won’t complain, though, because some flagships don’t offer much better.

But enough about the hardware: What about the Windows software versus Android and iOS? Being an everyday Android user, I was dying to see what Microsoft had to offer.

The Lumia 735 has Windows Phone 8.1 Denim onboard, but it is eligible for the update to Windows 10. I found the interface fairly intuitive in that I didn’t need to go online too often for help. In a nutshell, the interface is simple, but useful. The main screen is similar to the modern Windows desktop interface: It’s made up of tiles featuring whatever apps you want. Many of these are “live tiles” in that they show you useful information such as how many new emails or messages you have or the weather forecast. You can place the tiles where you want on the main screen and even re-size them.

The Windows software moves without hiccups since it requires limited power, but you can forget about high-end gaming.

A quick swipe to the left will show all the apps that are installed on the phone, and a quick swipe down will reveal your notifications, as well as shortcuts to various settings.

The contacts app, called People, will obviously show all your contacts, but a swipe to the left shows your Facebook and Twitter timelines. Swipe to the left again and you get options to create “Rooms” or “Groups.” Rooms are where you can chat and privately share your calendar and photos with select individuals. Groups make it easy to keep up with social media activities for a specific “group” of friends.

My biggest gripe, coming from an Android phone, is the lack of Google services and the limited number of overall apps. Let’s start with Google services. There’s no Gmail app, but Microsoft’s own Mail app will import Gmail along with your Gmail calendar. It works well, but it will take a little getting used to if you have been using Google’s official version of the Gmail app for an extended period of time.

You won’t find Google Maps, or most other Google products, but you will find Google Search and a Microsoft version of the YouTube app in the Windows Store. Microsoft Bing is the default search app out of the box.

Although limited, I was pleasantly surprised with the Windows Store. I was expecting it to be more of a ghost town than it ended up being, even though a lot of apps I use on Android aren’t available. Many of them deal with home automation and controlling my home theater, which might be considered niche, but widely used apps like Trello and Slack are nonexistent. I also found that some apps were buggy or didn’t work exactly like I was used to on Android phones. MX Player was a perfect example of this — it crashed constantly.

Then there’s Cortana, Microsoft’s virtual personal assistant, which is still in beta and continues to evolve. It’s similar to Google Now and Siri, but not as good as either. I found that Cortana would rarely provide search results in voice form. Even when she did speak to me, it was usually much shorter and lacked information. For example, when asking Cortana what the fastest animal is, you get a bunch of search result links. Ask Google Now the same question and you get a complete answer in voice form, along with the search results. You can hear Google’s assistant read an excerpt from Wikipedia telling you that the cheetah is the fastest land animal and the peregrine falcon is the fastest air animal. You even get their respective top speeds.

Still, a virtual assistant is about more than just searching for things. Cortana can do all the same stuff as Siri and Google Now, such as make a phone call, create a reminder, schedule an appointment, set an alarm, and so on. Cortana will certainly get the job done, and I have no doubt Microsoft will continue to improve it.

Microsoft does offer all of its own apps pre-installed on the phone, including Skype, OneDrive, Outlook, and Office. This isn’t as big of a deal as it used to be since Microsoft has now made all of these apps available on Android and iOS.

Office works seamlessly with the phone’s device storage or Microsoft’s OneDrive cloud storage. The Lumia 735 might not be an ideal device to edit documents because of its size, but I found it sufficient to format both Word and Excel documents well. Unfortunately some formatting options like centering are non-existent, but it’s perfect when you need to make a couple of minor changes in a pinch.

The phone does come with both Bing Maps and Here Maps, which is a little confusing. Here Maps is probably the most useful with its fantastic offline navigation abilities.

The Lumia 735 will be eligible for Windows 10 when it launches for mobile devices in the fall. It will be a nice upgrade, but it remains to be seen if more developers jump on board — especially Google.

The Microsoft Lumia 735 is a nice phone for the money, but it’s tough to recommend something that just launched in the U.S. so long after it was released. If it’s a Windows Phone you want, you’d be better off with a Lumia 640 XL for $57 more on AT&T or the Lumia 950, which is coming to AT&T soon, sports Windows 10, and includes flagship specs. It has a bigger 5.7-inch display and a better camera. However, if you’re stuck with Verizon Wireless, the Lumia 735 is your only option for a Windows phone.

Still not sure whether you want to be in the Microsoft ecosystem? There are a few Android phones that have better specs for the same money: The Moto G 2015 is at the top of this list, followed by the HTC Desire 626. These phones offer better specs and more available apps. The other plus is that you can still enjoy all the popular Microsoft apps like Outlook, Office, and even Cortana on these devices as well.

Topics
Video-editing app LumaFusion to get a Galaxy Tab S8 launch
The best rugged smartphones of 2022
Google Pixel Fold: price, release date, specs, and all rumors
iPhone 15: price, release date, specs, and all other rumors
Snapdragon 8 Gen 2 is here, defining the next generation of premium smartphones
Samsung Galaxy Z Fold 4, Z Flip 4 get big Cyber Monday discounts
Why a Kindle Paperwhite is the best $100 you can spend on Cyber Monday
When is my phone getting Android 13? Google, Samsung, OnePlus, and more
This Amazfit fitness tracker is $35 for Cyber Monday, and it’s selling fast
This 10-inch Lenovo tablet is $129 for Cyber Monday (selling fast)
Save $200 on the Samsung Galaxy Tab S7+ with S Pen for Cyber Monday
The best smartphone stocking stuffers for the 2022 holidays
Don’t buy the wrong iPad during Cyber Monday — get this one instead