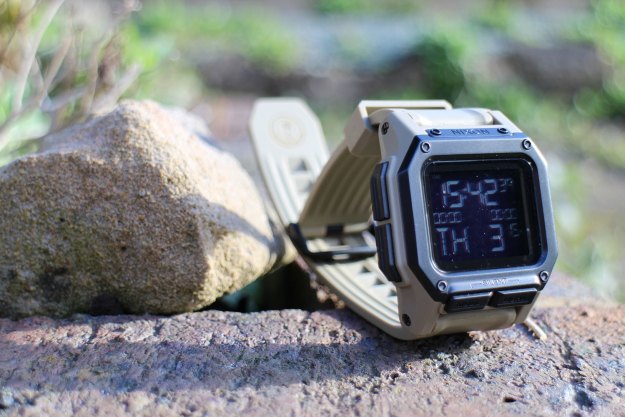 “A no-nonsense, super-tough watch that doesn’t connect to your phone but takes over when the smartwatch shakes its head in fear.”

Smartwatches can be extremely beneficial companions but outside of a few examples — Casio’s Pro-Trek and Nixon’s own The Mission spring to mind — very few are suitable for use in difficult, dirty, and really tough environments. You definitely wouldn’t want to subject your Apple Watch to rough treatment, for example, as the screen is entirely too easy to break. That’s where watches like the Nixon Regulus come in. It’s a traditional timepiece, in that it doesn’t connect to your phone using Bluetooth but that doesn’t mean it’s short of technical prowess – prowess which has gone into its construction and ability to be abused without consequence.

Lifestyle brand Nixon already has an extensive range of watches, with everything ranging from your standard timepiece to rugged, adventure watches. However, its latest square-faced model, the Regulus, is one we’d argue is its best-looking version yet. Nixon wants to appeal to skaters, surfers, and fans of street wear with a Californian edge. However, while clearly fashionable, its watches have a performance edge, too.

For the Regulus, Nixon called in help from people who need a watch that won’t break — like special ops soldiers. It’s that tough. Born from this partnership is a watch built to resist shocks with its injection molded case and stainless-steel bezel, screws, and case back. It’s water proof to 100 meters and the TPU band is incredibly thick with no chance of breaking if it gets caught up a few times.

Built to be resilient

The 46-millimeter body is quite burly, as well but fits happily under the sleeve of a hoody or sweater. However, we’re not sure the style is suitable for anything smarter in the sand color seen in the picture. Nixon does offer a stealthy black version which is likely much more versatile, style-wise.

For the Regulus, Nixon called in help from people who need a watch that won’t break.

The band is attached to the lugs using screws and unlike Casio’s G Shock watches, this gives it hinge-like flexibility. On the underside of the strap are channels to reduce heat and to allow water to flow out when it’s worn in the sea or pool. However, due to the way it’s attached and color matched to the body, swapping the strap for another, like a NATO, isn’t really possible. This lessens the longevity and one of the joys of watch ownership.

On the flip side, we did particularly like Nixon’s clever “lock” that keeps the strap overflow from flapping around — giving us a very strong reason for not changing the strap at all. This, combined with the spot-on size of the case and strap width makes the Regulus a great-looking and supremely tough watch.

Did we just become best friends?

Details we really like? Check out the Nixon name plate riveted down on the case and the gentle curve around the buttons under the face. Put it alongside Casio’s popular GW-5600 series — an obvious competitor for the Regulus — and it’s larger, squarer, and (to us) much more modern-looking. Whether it becomes as classic as the sought-after G Shock shape remains to be seen. It’s a very comfortable watch to wear and even at the gym, never became overly sweaty or itchy on the wrist.

Four buttons control all its features — our favorite of which is the adjustable backlight. This is an unusual feature and makes the negative — white numbers against a black background — display easier to read in low light. There are three stages, easily set using the light button, with the highest setting really illuminating the display well.

We also enjoy the look of the Regulus’s face, with its large well-designed numbers and letters. The other standout feature is a dual chronograph, which is joined by the expected timer and alarm. Finally, because pressing its mode button makes the watch beep — as does the alarm, of course — pressing both the front buttons silences the watch. Best of all, it’s immediately obvious silent mode is on with text on the screen.

The Regulus is available in three colors — sand, gunmetal, and black — and our review model in the sand color here is very eye-catching. It’s different from the usual black we see on basic tough watches and emphasizes its workhorse-cool shape and sharp angles. Nixon also priced it sensibly at just $150, so you could own it alongside other watches and use it when conditions and activities demand it. However, if you fall for it in the same way we did, you’ll find yourself wearing it more often.

Video-editing app LumaFusion to get a Galaxy Tab S8 launch
Razer’s 5G-enabled handheld gaming system is getting a public release
The best tablets for kids in 2022: Fire HD, iPads, and more
Apple AirPods Pro 2 vs. AirPods Pro: What’s new?
Amazon’s new Kindle Scribe turns the e-reader into the ultimate notepad
How to use iOS 16 photo cutout to cut and paste images
The best selfie apps for iOS and Android
Experts say the iPhone 14’s satellite feature may have a dangerous side effect
How the Galaxy Z Flip 4 fixed my unhealthy phone habits
iOS 16’s biggest Apple Pay feature might be delayed until 2023
Best iPhone deals and sales for September 2022
Huawei’s Mate 50 Pro is here with an insane 200x zoom
Best Prime Day Deals: What to expect from the October event