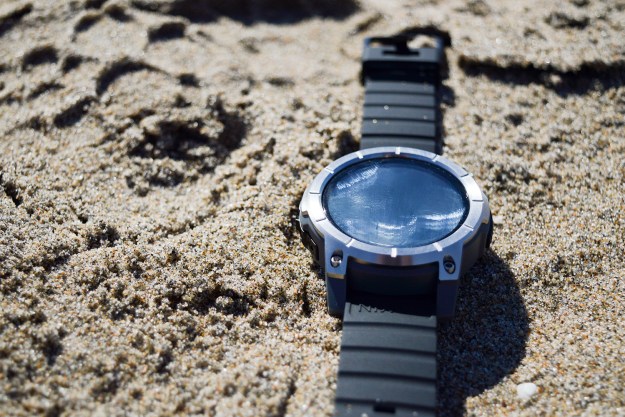 “The Mission is the perfect smartwatch for surfing or skiing.”

The name Nixon may mean Watergate and scandal to older Americans, but a younger crowd may be more familiar with the California watchmaker partly owned by Billabong. The company’s latest is one of the biggest Android Wear releases to date — and comes at a time when Android Wear is more than a little forgotten.

This watch isn’t just another showpiece for Android Wear, however: Android Wear is an operating system for this watch. The difference? The software is secondary here. But just how does The Mission compare to other devices? And is it worth the premium price? We put this Nixon to the test to find out.

The Mission is unashamedly a sports watch, and you’re not going to forget it – it’s huge. You may as well strap a dinner plate to your wrist. Okay, maybe it’s not that big, but the point is to prepare yourself for a big device if you purchase The Mission. The case of the watch is a huge 48mm, and it’s made with 316L surgical grade steel. That means it’s not just big but heavy too, and, if you’re a surfer, it should be able to withstand some pretty big waves.

The watch isn’t just wide, it’s also pretty thick — around half an inch thick, in fact. Safe to say, this isn’t a device you’re going to strap on and forget about. Considering how big it is, those with smaller wrists probably aren’t going to be fans. The size isn’t necessarily a bad thing, however; the device could be described as rugged, which is kind of the point here. That’s because Nixon targets skiers, surfers, and other athletes, so The Mission has to be able to withstand a few knocks.

The strap is also fairly rugged; it’s made of rubber and take a little maneuvering to properly tighten up. It’s not supremely comfortable, especially considering the size, but thankfully it’s not overly uncomfortable either.

There’s another reason The Mission’s size is a good thing: The watch doesn’t suffer from the flat-tire look other circular devices have, so the AMOLED display (it has a resolution of 400 × 400) is perfectly round.

Nixon has clearly put time and effort into engineering, and the result is top-notch waterproofing. In fact, the device has 10ATM waterproofing, which equates to around 100m, much deeper than any surfer will ever go. Heck, you could scuba dive with it. Watergate? Fuhgeddaboudit. You’ll have no issues no matter how the surf is pounding.

The Mission is unashamedly a sports watch, and you’re not going to forget it – it’s huge. You may as well strap a dinner plate to your wrist.

That waterproofing isn’t perfect for all of the device’s features, unfortunately. You’ll notice a strange looking mechanism on the left side of the watch, which locks and unlocks the microphone hole. You’ll need to remember to close that up when you’re going near water to keep the guts dry, which is unfortunate because that microphone can come in handy — especially if you’ve gotten used to “OK Google” voice commands.

You’ll find a button on the side as well, to toggle the watch in and out of its low power state and acts as a home button when you’re using an app.

When it comes to color options, The Mission has a range of options including custom ones. The process was extremely simple, which is good news for those that want to give their watch a personal touch. In fact, according to Nixon, the device offers a massive 44,000 design variations, if you include color options for the strap, bezel, and main body.

The Mission features a number of important trackers for surfers and skiers, although it doesn’t have everything.

Most important, the watch includes a GPS, one of few Android Wear devices to do so. That’s an important feature – most Wear smartwatches can piggyback off of their associated smartphones for GPS tracking, but as a skiing device and especially for surfers, the watch won’t always be connected to a phone.

To use the feature, you start by setting up a location for where you’re going to be surfing or skiing, something you can do through the Nixon app. Then the watch will be able to tell you the conditions of your chosen location, including things like wind speed and the weather.

Different metrics will show on the watch face depending on whether you’re surfing or skiing. Skiiers will see top speed and altitude; surfers will find altitude replaced with distance travelled.

Seeing these things is cool, but unfortunately the smartphone app and watch app are largely set on in-the-moment stats – they don’t offer information for improving your technique or changing how you ski or surf. And the watch doesn’t have a heart-rate monitor, something you’d expect from a device of this thickness and nature. Most smartwatch monitors of this ilk aren’t very accurate, yet it still would have been nice to see.

The watch runs on Android Wear 1.5, however hopefully it will get the update to Wear 2.0 when the software is finally released. For more on how to use Wear, head here.

The Mission smartwatch has a range of sensors, but not everything you would expect from a sports watch – notably, it’s forgetting the heart rate monitor. Apart from that, however, it’s a pretty packed device. Inside, you’ll find a thermometer, altimeter, barometer, gyrometer, humidity sensor, and accelerometer. That’s a lot of ometers, on top of the GPS radio.

All these sensors come with a cost: battery life. After a run that lasted around an hour, The Mission lost almost half of its battery life. That may not be a big deal for some, but don’t expect to wear this watch to work all day and then take it out for a run.

That issue gets even worse for other outdoor activities. Want to take the watch out for a hike all day? Forget about it: This watch simply won’t last through the day.

If you don’t use the GPS at all – and simply wear the watch during the day like you would any other watch, results were a little better, and we found we could get through almost two days of use. But then again, if you’re looking for a device to wear simply as a watch, this bulky, heavy timepiece won’t be your first choice.

Looking for a dedicated surfing or skiing device? Nixon has built your best option, and thrown in a slew of sensors and 10ATM waterproofing. This is an excellent device for its intended market. And we like the attention to detail, including the little cover for the microphone port.

For surfing or skiing, this may well be the best watch out there. For everyone else, the Garmin Fenix 3 may be a better sports watch – although you will have to shell out a little extra cash. But it includes everything a fitness fan could ask for, including a built in heart-rate monitor. Sportspeople looking for a device to take hiking or running might also consider the new TomTom Spark 3, a excellent fitness tracker well suited to workout junkies.

The watch is extremely durable and should last years without breaking. With 10ATM waterproofing and a very strong build, the device should last a very long time. How long will Android Wear itself last? That’s a different question entirely, and lack of support from the market sounds a sour note for its long-term prospects. Still, we’re bullish on the overall space and expect to see continued improvements to the platform that should be reflected in Nixon’s offerings.

Hanging ten sometime soon? Buy this watch. Hitting the slopes this season? Buy this watch. Planning athletic pursuits in some other field – hiking, biking, running, cartwheeling, high-jumping, etc? Keep looking. The perfect wearable is likely just over the next hill.