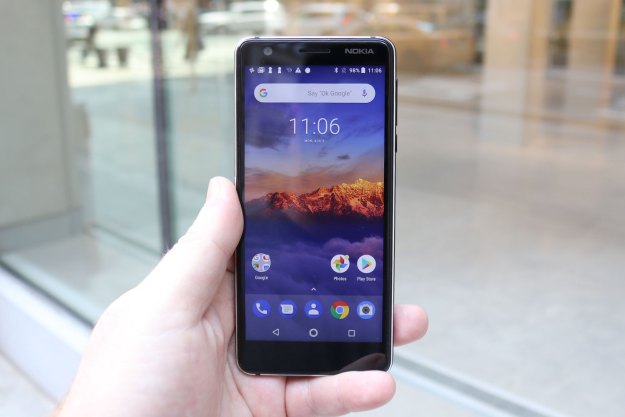 “Poor performance and a mediocre camera make the low-priced Nokia 3.1 a bust among budget phones.”

The Nokia 3.1 didn’t hit the mark, but our hands-on review of the Nokia 3.1 Plus finds it a much more promising device.

The Nokia 6.1 is our favorite budget smartphone under $300, and HMD Global — the company licensing the Nokia brand name and designing these phones — has introduced an even more affordable option to the U.S. market.

The Nokia 3.1 comes in at just $160, but even at that price it faces tough competition from the likes of Motorola and Honor. It eschews all frills and attempts to focus on the fundamentals, but HMD has to do better. We’ve been using the phone for a few weeks, and there are a few too many compromises. Let’s take a closer look.

The Nokia 3.1 follows the same design cues as its more expensive siblings. There’s no glass on the back — instead you’ll find a phone that’s more utilitarian than stylish.

The front of the Nokia 3.1 carries a 5.2-inch display with chunky bezels at the top and bottom. The top bezel is home to a wide-angle 8-megapixel camera along with the 3.1’s only speaker and prominent Nokia logo. The unadorned bottom bezel looks lonely in comparison. There’s a chrome accent line that works that works its way around the display, adding a nice contrasting look, but its continuity is abruptly interrupted on the top and bottom of the phone due to thick, black antenna lines.

The IPS LCD display has a 1,440 x 720 resolution with an 18:9 aspect ratio. Colors are a little muted overall, and the display is dim. Even with the brightness cranked all the way up we had trouble seeing the screen outdoors. But for the most part it’s  perfectly adequate. We had no issues streaming Netflix and YouTube, and the screen quality posed no problems.

Flip the phone over and you’ll find a black, polycarbonate back with a chrome-accented single-camera lens, flash, and, more Nokia branding. The camera bump is is nearly imperceptible, and the back of the phone is curved ever so slightly, adding a nice ergonomic feel when the phone sits in the hand.

On the bright side, there’s a 3.5mm headphone jack at the top of the phone.

Notice anything missing? If you said “fingerprint sensor,” you’re correct: There’s none to be found on the Nokia 3.1, though there’s plenty of room for one on the bottom bezel or back. It’s a shame HMD decided to sacrifice the fingerprint sensor on the phone as it really removes the convenience we’ve all come to know and love. The Nokia 3.1’s competition have fingerprint sensors — even the $100 Alcatel 1X Android Go phone packs one.

While the polycarbonate back will certainly be more durable than glass, it does feel cheap. Tap on the back of the phone and it you won’t get a substantial thud you’ll find on other phones — instead you’re greeted with a hollow ring. This is more a remark than a criticism, as most budget phones we’ve tested in this price range can’t help but feel cheap.

On the bright side, there’s a 3.5mm headphone jack at the top of the phone. Over on the right is the power and volume buttons, which are made of the same plastic on the back of the phone. The buttons feel a little loose, but they didn’t cause any issues. The bottom of the phone is home to a MicroUSB charging port — which is another disappointment as many Android phones use USB Type-C, but we’ll give HMD a pass as budget phones in the price range still use MicroUSB.

The Nokia 3.1 doesn’t look and feel like anything special; it’s basic, the design works, but a fingerprint sensor is sorely missed.

The Nokia 3.1 is powered by a Mediatek MT6750N octa-core processor with 2GB of RAM (international models have 3GB). Compared to other budget phones like the Honor 7X or Moto E4 Play, performance is frustrating slow.

Two of our benchmarking apps wouldn’t even run.

Lag is a constant companion, from unlocking the phone and opening the app drawer to launching apps and opening the camera. There’s also a pronounced stutter when scrolling through apps like Facebook or Twitter that makes the entire experience painful.

People who like to play games on their phones may find using the Nokia 3.1 even more infuriating. We were able to play Super Mario Run with just the occasional stutter, but when we attempted PUBG MOBILE, things went south. It was possible to play on the lowest graphics setting, but you probably don’t want to sit through constant lag.

Two of our benchmarking apps wouldn’t run on the Nokia 3.1, but here’s what did work:

The Nokia 3.1 performed better than the Moto E5 Play and E5 Plus in our benchmark tests, but it came far behind the slightly more expensive Honor 7X. But benchmarks do not tell the full story, and in our review period, we found the 3.1 performed much more poorly than the rest of these devices.

The U.S model of the Nokia 3.1 comes with 16GB of storage — which we easily maxed out since Android alone takes up more than half of that storage space. Thankfully, a MicroSD slot lets you add more storage if needed.

Perhaps the Nokia 3.1’s best feature is its software. It runs stock Android through the Android One program (Android 8.1 Oreo). The Android One program promises fast software version and security updates for two years, and a clean interface with minimal bloatware. This phone will get Android 9.0 Pie later this year. Most budget phones rarely get updates, so we’re happy to praise a company that puts a priority on issuing updates.

It’s hard to expect much when it comes to budget phone camera. They tend to take decent photos in good light, and mediocre to bad photos in low-light scenarios. The Nokia 3.1 bucks that trend, but not in a good way.

There’s a 13-megapixel primary camera on the rear with a f/2 aperture, and an 8-megapixel selfie cam with the same aperture on the front. The first batch of photos we took in daylight didn’t just come out blurry, but they had huge lens flares. After cleaning the lens and checking for software updates, we tried again but our tests yielded similar results. Figuring It was a problem with our review unit, we contacted Nokia for a replacement.

Our replacement unit didn’t have the same lens flare issue, but the shutter was incredibly slow. To get decent shots in broad daylight, it was necessary to hold the phone still for three seconds after tapping the shutter button — you don’t need to do that with other phones in this price range.

Shutter lag aside, our daylight photos managed to look decent. Colors are accurate and details are acceptable, but some of the photos lack depth and appear flat.

Low-light photos are another issue altogether. There was significant noise and detail loss, and we needed to be completely still yet again to avoid any type of blurriness. There are some decent photos in the gallery above in this kind of lighting, but we were only able to capture them after quite a few attempts.

We never had high hopes for the Nokia 3.1’s camera, but it certainly surprised us at how lackluster it really is to use.

The 2,990mAh battery, of all things, is the shining star on the Nokia 3.1. On an average day, we used the phone to surf the web, scroll through social media, listen to music through Spotify, watch YouTube videos, and we managed to have 40 percent left by 8:30 p.m (after taking it off the charger at 7 a.m.).

Unfortunately if you do find yourself running low on battery, there’s no quick charging feature on the phone.

The Nokia 3.1 costs $160, and you can purchase it through Amazon or Best Buy. It supports GSM carriers like AT&T or T-Mobile, and it won’t work on CDMA networks like Sprint and Verizon.

The phone comes with a standard one-year warranty that covers any manufacturer defects. Water damage, drops, and “Acts of God” are not covered.

The Nokia 3.1 is an underwhelming phone in every way. From its low-tier specs, to its mediocre camera, software and battery life are the only things HMD got right on this phone.

Yes. Several excellent budget phones have been released this year. The Moto E5 Plus is an excellent alternative if you can find it for less than $200. Since the E5 Plus packs in a better processor and more RAM, you should have a much better experience overall. It also features a massive 5,000mAh battery, meaning you should able to easily get through a day, if not two, between charges. It’s also worth looking at the Moto E5 Play, which can cost as little as $70 depending on your carrier.

If you’re willing to spend a little more, you may want to check out the Nokia 6.1. It comes in at $270 and is our favorite budget phone for 2018. The $250 Moto G6 and $200 Honor 7X are also worth considering, and you can learn more about them in our best cheap phones guide.

The Nokia 3.1 should last you a year or more. We say that largely because we believe performance will simply get worse the longer you use it, and you’ll likely want to throw the phone out a window.

Still, its build quality is good, and the plastic body is more durable than other budget phones with an all-glass body. Since the phone is a part of the Android One program, you can expect regular security and OS updates for two years.

No. Even at its low price, the Nokia 3.1 doesn’t offer the performance and reliability we’ve come to expect from HMD.