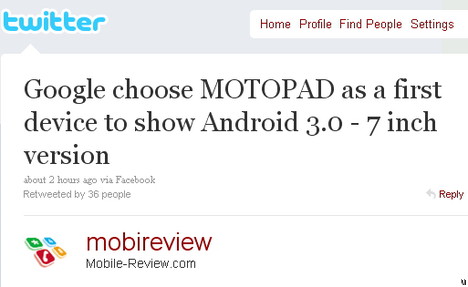 The first tablet with a version of Android tailored especially for tablet-sized screens is rumored to be coming soon. Motorola will reportedly produce a new 7-inch tablet running Android 3.0 Honeycomb (that’s right, not Gingerbread) dubbed the Motopad.

Russian site Mobile Review’s Eldar Murtazin clued the masses in with a tweet this morning, and being a reportedly reliable insider, it’s been taken as gospel. The combination makes sense, as Google and Motorola’s Droid smartphone was a significant success that could translate well to a tablet. The Motopad could easily cash in on the Droid’s popularity and win over some consumers on name and reputation alone.

As far as details go, Murtazin also claims that the Motopad will run Nvidia’s dual-core processor and be available through Verizon.

The rumored tablet’s firmware is somewhat more intriguing than its hardware, however. This is one of the few times any information about Android 3.0 has been discussed. Google has been mum on the subject, and has yet to release Android 2.3 (fingers crossed it’s this week).

Just for clarification on the nicknames, Android rumormongers originally ascribed the name Gingerbread to Android 3.0, but it now looks Gingerbread is actually Android 2.3, while all signs point to Android 3.0 gets the fresh moniker Honeycomb.

The Samsung Galaxy Tab has been a popular item since its recent launch, but Android 2.2 wasn’t designed with tablets in mind, which is something Google will address if these rumors about a customized OS are true. And if you’re heartbroken over the loss of a 10-inch screen to trump the iPad, don’t get too down: Murtazin’s tweet specifically called the device a “7 inch [sic] version.” A 7-inch tablet running on Android 3.0 OS might only be the premiere product, followed up by the rumored 10-inch Motorola Stingray tablet. But let’s not get too ahead of ourselves.

This all comes shortly after last week’s rumors about a 10-inch Samsung tablet displayed at a China electronics conference, which could prompt Motorola to produce a larger model, too. Whatever the outcome, it’s safe to say Google has something up its sleeve which could be released very soon, if those Motorola claims of a tablet in early 2011 are correct.