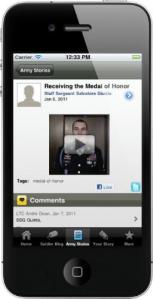 The U.S. Army is constantly trying to cast itself as modern and “with it” in its attempt to enlist young recruits. In the era of smartphones and Tumblr, what better way to appear hip than by launching an iPhone blogging app?

The Army Stories app is will work in conjunction with a mobile website to let users “share their own Army Strong story, post comments, and learn more about Army service and the breadth of careers available,” according to a press release. Videos and photos can also be uploaded and posted.

The app isn’t restricted to soldiers, either. Any “U.S. Army supporter” can sign up through the Army Strong website.

It’s no secret that the app is first and foremost a recruitment tool for the Army — so expect to only see “stories” painting service in a positive light.

The app’s release signifies that the Army is willing to play along with social media as a communication tool for its soldiers — somewhat surprising in the era of WikiLeaks.

“It is to the great advantage of the U.S. Army to keep current and equip our Soldiers with the latest technology to ensure they continue to share authentic stories about their daily lives in the Army,” said Lieutenant General Benjamin Freakley. “The Army Strong Stories iPhone app and mobile website reinforce the Army’s ongoing commitment to embracing social media and new technology.”

It’s not the first time we’ve seen the Army embracing the power of smartphones. Last year, the Army Times reported that service was considering making iPhones or Android devices standard issue for soldiers in the field.

The Army Strong App is available as a free download through Apple’s App Store. While native app support is currently only offered for iOS, the Army Strong mobile website supports Blackberry, Android, Windows Mobile and WebOS.