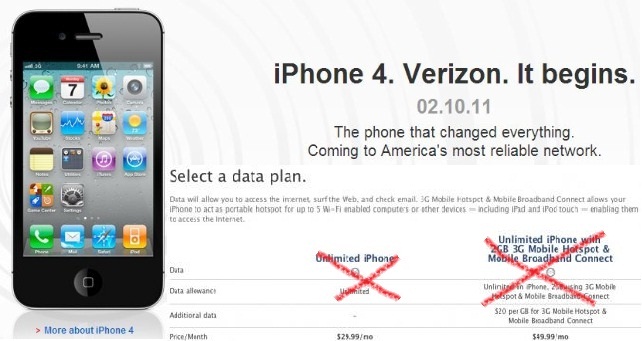 Less than a month after introducing the iPhone, Verizon announced it will be pulling its $30 a month unlimited data plans for the Apple smartphone by summer. Reuters reports that at an investor meeting today, Verizon CFO Fran Shammo claimed that it simply is “not a long-term solution” for the phone contracts. Tiered pricing will increase Verizon’s profits.

As could have been expected, Shammo admitted that the unlimited data plan was originally implemented to lure in new users for the iPhone’s launch, and that this summer it will follow in AT&T’s steps and begin tiered pricing. AT&T was reportedly mulling reinstating its former unlimited plan for the iPhone when Verizon announced it would be ending its rival’s exclusivity with Apple, but there’s been no further comment on it. AT&T offered unlimited for three years, pulling the option in July 2010 after insisting a limited number of users were hogging bandwidth on the infinite data plan.

Verizon, on the other hand, only gave its customers this option for mere months. It’s possible that disappointing sales and the looming launch of the iPhone 5 is causing the carrier to cut costs sooner rather than later. “There could be some (margin) lumpiness when you launch the phone. If there happens to be a new one that comes out, that quarter might not look so good (either),” Shammo warned investors. Shammo failed to give any sales numbers, instead only saying that 60 percent were from online shoppers. It’s been reported that the iPhone’s sales with the network were below expectations.

Verizon has a conundrum on its hands. When the iPhone 5 makes it way to AT&T before its competitor’s network, Apple fanboys with the Verizon iPhone are sure to be disappointed, to say that least. But if Verizon does get an iPhone refresh in the near future, those who bought the device this month will be less than thrilled that the upgrade will elude them. When it was originally announced Verizon would carry the iPhone, there was widespread speculation that the timing seemed unfavorable. As analyst Jonathan Chaplin told Reuters, “You’d be worried there’d be a backlash from consumers. What they don’t want is for Verizon to be put in a position where it’s forced to offer free trade-ins. There’s some risk of that.” Chaplin also notes this would hurt Verizon profits, which are still unknown when it comes to its iPhone sales. We can expect to see the results at the end of the quarter.

Video-editing app LumaFusion to get a Galaxy Tab S8 launch
Why the lawsuit against Apple’s AirTags may be bigger than you realize
Apple Music Sing brings karaoke singalongs to iPhones, Apple TV
My favorite phone of 2022 didn’t come out this year — it’s from 2021
It’s 2022, and customizing my iPhone is still horrible
The best iPhone games to play in December 2022: Marvel Snap and more
I thought iOS 16 would ruin my iPhone 8, but it shocked me
The best Android games available right now (December 2022)
The most innovative tech products of 2022
How to unlock a phone on every carrier in 2022
This ridiculous smartwatch has a hidden pair of earbuds inside
This retro battery pack is way cooler than it has any right to be
Apple Health vs. Samsung Health? What I learned after using both