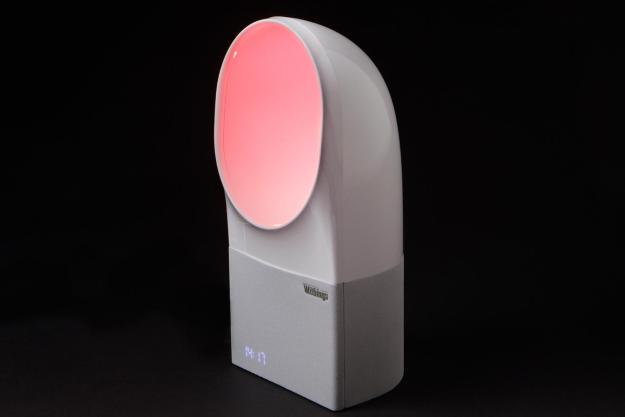 “Aura’s scientifically validated light and sound program lets users kiss snooze goodbye and embrace the morning by using your sleep data to pick the best moment to wake you up.”

We sleep a third of our lives. Yet studies show more than half of us are unsatisfied with the amount and quality of sleep we get. And in the U.S., one out of five motor vehicle accidents is related to sleep deprivation.

Besides, a good night’s sleep contributes to better health and overall quality of life. Slower cognitive processing, serious health risks, forgetfulness, weight gain, and early aging are just some of the symptoms that could occur when we fail to recharge each night.

Enter the Withings Aura (after more than two years of research and testing), a finely tuned sensor for sleep tracking that you don’t have to remember to wear to bed or activate. Aura comes complete with a nightstand companion that not only provides power but also acts as an alarm clock and sound machine to lull you to sleep. The product retails for $299 so it’s not exactly an impulse buy. But after hitting the sack for over two weeks with the device, its value and purpose became evident. Keep reading — I’ll tell you why!

Aura is not new per se: Withings unveiled the device at CES in 2014, but the product only recently hit shelves. Aura is a sleep coaching system that takes a different form than most others, since it doesn’t require you to wear a band or whatnot while you sleep. Instead, the system consists of a sensor placed under your mattress and a bedside device that serves as both lamp and alarm clock, controlled by a companion iOS or Android app.

The bed sensor monitors body movements, breathing cycles, and heart rate, while the bedside device monitors ambient environmental factors like noise, light, and temperature. It also emits light and sound to help you fall asleep or wake up, facilitating the release of the hormone melatonin into the body, the company claims.

Because the app also tracks daily activities, it can show you how daily activities and things like high blood pressure can impact sleep. Notably, Withings has curated a wide health-tracking ecosystem. When these products are used together, users can get a fuller perspective of their total health.

Overall, Aura is a well-designed product, albeit a touch futuristic. The Aura itself is a small, white, bedside unit that connects to a sensor that slips under the mattress. The sensor is designed for one side of the bed only – meaning that it will monitor only your sleep. If you want to measure the sleep of your partner, purchase another sensor.

The bedside unit serves as an alarm clock with a display that softly glows from the base of the device. When I took Aura out of the box, my wife described it as a nautical looking clock — almost like the horn-shaped vent on a ship. I think she’s spot on. It’s sort of like a touch-sensitive lava lamp for your nightstand.

It’s like a touch-sensitive lava lamp for your nightstand.

The base of the unit is a quality speaker while the main dome houses an LED bulb (we’ll talk more about why in a moment). The rear of the unit includes a USB port that allows you to charge your phone or other device. However, sleep experts concur that bringing the phone into the bedroom is a no-no for getting good zzs. Aura does take up a fair amount of space, so twice if space on your nightstand is minimal.

Interacting with the device is intuitive. There are no buttons to press — rather, Aura has a touch-sensitive surface triggered with simple hand movements. A 3-second tap atop the device activates sleep mode, while a slide of the hand along the right side dims the unit’s lights or changes volume. The Health Mate app also lets you enter and exit sleep modes, control the volume, and select 1 of 10 sounds for sleeping, waking, or napping.

The stresses of life and modern tech can take a toll on your sleep. Your phone’s light or ambient light and noise from your TV often interrupts, for example. Aura ambitiously aims to do the opposite.

Simply tap the top of the device to enter sleep mode, and if needed, swipe your hand along the right side of the device to control the light and sound intensity. Then close your eyes and let Aura’s glow take over the room. Aura uses its built-in LED to emit a warm, red glow that emulates sunset and stimulates sleep-inducing melatonin. It also croons you to sleep with one of four soundtracks: “Moonlight waves” and “celestial piano” seemed the most soothing for me.

Falling asleep with Aura took some getting used to. But the more I used it, the more it became a useful way to unwind after long and stressful days.

Meanwhile, the mattress pad tracks the time it takes to fall asleep, the number of midnight wake ups, and light, deep, and REM sleep cycles. Based on this data, the Aura builds a smart alarm to ensure that you come gradually out of a light sleep cycle rather than harshly out of deep sleep — helping you feel more refreshed and alert all day. Based on my sleep stats, I was able to achieve longer periods of deep and REM sleep with Aura than without.

When it’s time to wake, Aura transitions from the melatonin-producing red light to a blue and purple light for opposite effect. A “smart wake-up” feature aims to rouse you when your body is ready. Aura lets you choose when you want to wake up, of course, but using your sleep data, it will determine a window within 20 minutes of your intended wake time when you are in the lightest stage of sleep. It then brings you to awareness slowly by brightening its lights and playing smooth sounds. This is far less alarming than the harsh tones of my iPhone and more effective in waking me up than the familiar voices on my clock radio.

Aura tracks your movement and heart rate too, along with the temperature and luminosity of the room while you slumber. All of this data is logged in real time on the Health Mate app. But is it accurate, buried deep beneath a thick mattress? On at least a few occasions, Aura told me that I woke up later than I actually did. I suspect it picked up the movement of my wife and continued to track her sleep, despite the fact that I was already 2 hours into my day by the time she awoke. Is Aura’s sleep data entirely mine, or a combination of my data and my bedmate’s?

What’s more, aside from temperature and heart rate data, Aura offers little more analysis than the company’s activity bands, which retail for a fraction of the price. Aura’s data is likely more accurate because it tracks more than simple movement (or lack thereof), but the provided graphs and data visuals are still vague, ambiguous, and lack actionable data. For example, I can see how much deep sleep or REM I get in a night, how many times, if any, I wake up during the night. But what does good look like? How can I improve my sleep in a way that is truly impactful to my health and general well-being?

More on the app

Withings’ Health Mate app was named one of Apple’s Best Apps of 2014 and that distinction is well-deserved. It is, of course, HealthKit compatible and serves as the data collection hub for all Withings products. It’s capable of tracking an array of activity information, from steps and calories burned to heart rate and blood pressure to weight and body fat, and of course, sleep.

Let’s get back to sleep (you know what I mean). The companion app lets users control Aura’s volume and brightness settings, alarm functions, and other customizations. It provides a rich trove of data through an array of charts and graphs that users can analyze: light and deep sleep, interruptions, and so on. But again, this information is only so useful. The app fails to provide tips on how to improve sleep, or more granular information on sleep patterns and their impact on sleep quality.

To justify Aura’s $299 price tag, I’d like to see more specificity and clear advice on improving my sleep. Otherwise, Aura becomes a high-priced sound machine. And sleep data is fun to pore over — I’m a junkie for the quantified-self trend — but I can get the same data using other fitness trackers or other Withings products at half the cost.

Aura is a well-designed device that’s more capable than other devices of accurately tracking sleep quality. With a few tweaks and a better way to translate sleep data for ordinary folks, the $299 price tag would be more than justified. But with plenty of other lightweight activity trackers, dropping $300 on Aura might keep you up at night.

The savvy shopper might consider other products like the soon to be released Withings Activite Pop, Jawbone UP24, or Fitbit Charge. All of these will show you how many logs you sawed last night without, along with activity data, without cutting your bank account in half as well.

That said, Aura goes beyond just tracking. It serves as a replacement for your existing alarm clock and as a sleep aid for anyone who struggles with healthy dozing, it could be worth every penny. Having achieved deeper Zzs with the Aura, I certainly appreciated that part.

The Withings Aura is better than counting sheep but if you’re thinking about buying one, I’d sleep on it for a while — at least until the company introduces a sleep pad for bedmates and make a few vital improvements.