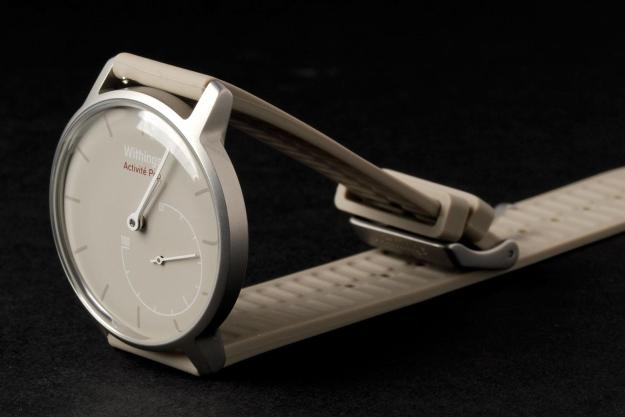 “If you want an attractive fitness tracker that doubles as a gorgeous wristwatch, look no further than the Withings Activité Pop.”

It’s not every day you see a company sell two devices with totally comparable functionality and specs, and charge $300 less for one. But French gadget maker Withings has done just that with the Activité Pop, the $150 predecessor to the first Activité smart watch, which still retails for $450.

Withings placed all the same sensors for functions like step counting and sleep tracking into a slightly less premium package that still manages to look distinctive. The end result is a very accurate activity tracker that looks like an elegant, designer wristwatch, but costs just $20 more than the new Fitbit Charge.

If you want an attractive fitness tracker that doubles as a gorgeous wristwatch, look no further than the Withings Activité Pop.

All too often manufacturers compromise on style when they cut the costs of expensive products to make entry-level models, but Withings trimmed the Pop in all the right places.

The domed screen isn’t made of anti-scratch sapphire glass, but it is still artfully curved and won’t scratch easily. The stainless steel case may not be shiny, but it is PVD coated to protect it from water down to 5 ATM. The matte finish is subtler than the bright, shiny metal on the original, but it comes in different colors, which is fun.

The Pop is a fun, funky watch with a classy design.

Instead of leather, Withings gives you a soft, flexible silicon strap this time around, which makes the Pop rest comfortably on your skin. The bands also come in new colors like orange, blue, black, green, and sand, so you can mix it up from time to time. It’s unclear how much the alternate straps will cost, and you don’t get a spare one in the box like you did with the first Activité.

The watch looks the same as the original Activité, but it’s missing the different-colored activity-tracking hand, and the time hands are just white, not shiny steel. Additionally, the marks for each hour are flat, not raised or shiny like those on the first Activité. We still really liked the Pop’s design in spite of these small changes.

You’d never, ever mistake the Activité Pop for a cheap imitation of the original; it’s a more casual watch for a different kind of customer altogether. The first Activité is high-class dinner and office attire, but the Pop is more business casual and relaxed.

The Activité Pop does all the same things as the original, just as well as the original. Withings packed in its day and night motion sensor, as well as a high precision MEMS 3-axis accelerometer to keep tabs on your movements. It tracks your activity, calories burned, steps taken, laps swum, and it monitors your sleep patterns. It still has that awesome silent alarm, too, so you can wake up peacefully.

Withings didn’t skimp on sensors or internal components one bit with the Pop.

In our tests, the Pop’s measurements were just as accurate as the original Activité’s. In fact, it actually synced with the app faster than the first Activité did, thanks to a firmware update on the watch itself. It also changed time zones seamlessly as we hopped around the county.

The Health Mate app has a simple interface that looks just like every other fitness tracking app out there. You can set your alarm there, check out your daily stats and see how well you slept each night.

The Pop uses the same coin-cell watch battery, which lasts about eight months and is easy to change when it runs out of juice.

So, which one should you buy?

Once you’ve decided that the Withings Activité is the smart, fitness-tracking watch for you, all that’s left is to decide which one is more suitable for your style and budget. Since the two devices perform the same functions equally well, it’s purely a personal choice based on a few differences between the two.

Withings told us that it imagines the Pop as more of a graduation gift for your soon-to-be college student. Meanwhile, the Activité is geared towards professionals, and those who would normally buy a designer watch, but want something with activity tracking built in.

Of course, there’s also that $300 price difference. Sure, the original Activité gets you a spare band, and a spare battery … but you can buy a lot of bands and batteries for $300. And we’re not sure the finer materials will justify the expense for most buyers.

What do you really want a smart watch for? Athletes and those who really want to track their workouts should go with truly sporty bands like the Fitbit Charge HR. Those who prefer a more stylish watch and just want to make sure they hit 10,000 steps a day will be thrilled with a Withings Activité Pop.

Video-editing app LumaFusion to get a Galaxy Tab S8 launch
It’s official: Apple is required to make a USB-C iPhone by 2024
How to watch Google’s Pixel 7 and Pixel Watch event on October 6
Waiting for Touch ID on a new iPhone? This report has some bad news
Apple comes clean with what it really thinks about iPhone 14’s Dynamic Island
OnePlus wants your help to plant thousands of new trees
How to remove watch links from the strap on your new watch
Best cell phone plan deals for October 2022
When is the best time to post on Instagram?
Best Google Pixel Deals: $250 off the Pixel 6 Pro
The best Samsung Galaxy S20 deals for October 2022
Best Samsung Galaxy Note 20 deals for October 2022
How to manage all of your Apple Watch notifications