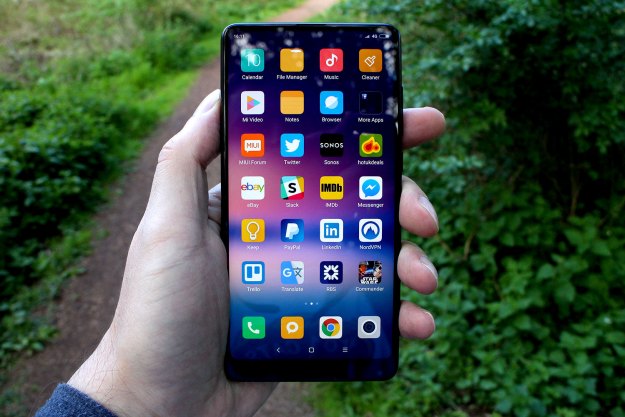 As prices for flagship smartphones have climbed in the last couple of years and improvements have been relatively modest, it feels like we’re suffering from diminishing returns. Manufacturers have placed more emphasis on design, but the two dominant forces in the market — Apple and Samsung — are also charging a premium for their top-tier phones.

Xiaomi’s Mi Mix 2S is a gorgeous flagship that can go toe-to-toe with the best in terms of high-end specs and stunning beauty, while costing significantly less (around $600). The problem? You will have to import it, because there’s no official U.S. availability yet. So, should you consider it? We took it for a spin to find out.

Who needs a notch?

Let’s not beat about the bush — this is one of the best-looking phones we’ve ever handled. The black ceramic back curves into the aluminum frame. There’s a dual camera module at the top left, with a glint of gold around it and a recessed fingerprint sensor, which doesn’t double as a button. We could live without the “Mi Mix designed by Xiaomi” slogan in gold lettering, but the Chinese manufacturer is clearly proud of this design.

While countless Android lemmings embrace the notch, Xiaomi has been pursuing a bezel-less design from a different angle for a couple of years now. The original Mi Mix was one of the first phones to aggressively shrink those bezels down and it still has one of the highest screen-to-body ratios you’ll find. The Mi Mix 2S continues the tradition, though it’s not quite as all-screen as its predecessor.

We’re told the notch is the answer to the tricky problem of where to put the front-facing camera and other sensors, but Xiaomi has chosen to put it at the bottom right corner below the screen. While we don’t tend to snap a lot of selfies, this placement is actually a lot less awkward than you might imagine. More on that when we dig into the camera.

On the right edge, you’ll find the power button with a volume rocker above it. The SIM tray and MicroSD card slot are on the left. The bottom edge is home to a USB-C port and the mono speaker, but you won’t find a 3.5mm audio jack anywhere.

Let’s not beat about the bush — this is one of the best-looking phones we’ve ever handled.

It feels reassuringly hefty in hand (it weighs 191 grams), which adds to the impression of quality. It’s a phone we enjoyed handling and one that draws admiring glances and questions when you slip it out of your pocket.

As gorgeous as the ceramic body is, you should be prepared for finger smudges galore. We also frequently woke the touch-sensitive fingerprint sensor, sparking a vibration every time we put the phone away or pulled it out.

This is not going to be an especially durable phone, though we were relieved to find that an accidental drop onto stone only scuffed the corner of the metal frame. Most phones nowadays are glass, so the need for a case is standard. Where the Mi Mix 2S does drop some points is its lack of water resistance, which is something we’ve come to expect in a flagship phone.

Minor gripes aside, we love the look and feel of the Xiaomi Mi Mix 2S — it is positively dripping with class.

The 6-inch (5.99 if we’re being pedantic) display covers most of the front of the Mi Mix 2S. The thinnest of bezels separates it from the top and sides, and there’s a larger bezel at the bottom.

We’re a little disappointed to find that it’s an IPS LCD screen with a resolution of 2,160 x 1,080 pixels. It sports the modern 18:9 aspect ratio that has become standard over the last year, but it’s lackluster. Next to a Galaxy S7 Edge, which is more than two years old, the Xiaomi Mi Mix 2S is dull and lacks the same razor sharpness.

We’re convinced OLED is the way forward, but even in the LCD world this isn’t one of the best displays around. The pixel density isn’t a big problem — text is perfectly readable and movies and games look fine – it just isn’t especially bright or vibrant.

Xiaomi certainly hasn’t cut any corners in the processor stakes. The Mi Mix 2S has the latest Snapdragon 845 processor from Qualcomm, backed up by 6GB of RAM with 64GB or 128GB of storage, or a whopping 8GB of RAM with 256GB of storage like our review unit.

Performance is fast and silky smooth as you’d expect. We played PUBG: Mobile on maximum settings, Super Mario Run, Star Wars Commander, and a few other games without any issues. It did get warm while playing PUBG: Mobile, but that’s not unusual.

The benchmark results are equally impressive:

Two of those results are slightly better than the Samsung Galaxy S9 Plus managed, though it got a far higher 3DMark score. Benchmarks alone never tell the whole story, but this is certainly a speedy phone.

Performance is fast and silky smooth as you’d expect.

Unfortunately, despite the fast performance, we did encounter some strange issues with the Mi Mix 2S. Both Twitter and Chrome crashed more than once, something that has never happened to us with previous phones we’ve tested.

Xiaomi has applied its own MIUI on top of Android 8.0 Oreo and by default it wants you to sign up for a Mi Account and use Xiaomi’s cloud services, which are optimized for life in China. We prefer Google, and thankfully you can install all your usual favorites, but you can’t set up Google Pay or other contactless payment services.

There’s nothing wrong with MIUI, but it takes some getting used to as you navigate unfamiliar menus. But there are some real oddities – why have a watermark on every photo? Luckily, you can dig into the camera settings and turn this off. There’s also no app drawer, but you can always install a different Android launcher if you don’t get along with MIUI.

The odd quirks, such as spelling mistakes in pop up messages, reinforces the fact that this is a phone made for the Chinese market first. Although Xiaomi has been making noises about breaking into the U.S. market for years now, it hasn’t happened yet. Looking at the recent troubles Huawei and ZTE have run into, we can’t see it happening any time soon.

Camera is a mixed bag

You’ll find a dual rear camera in the Xiaomi Mi Mix 2S pairing two 12-megapixel sensors. The main one has an f/1.8 aperture, while the secondary lens has an f/2.4 aperture. In good lighting the Xiaomi Mi Mix 2S captures some great shots with plenty of detail and colors that are vibrant without veering into unrealistic. If you’re snapping your friends and family, or stunning landscapes, we think this camera will serve you well.

It doesn’t manage quite as well with close-up shots. You really must take time to focus where you want. This isn’t the fastest camera around to load, change modes, or shoot a photo.

When light is mixed or more limited, we found the camera results a bit disappointing. It can’t match the low-light performance of phones like the Pixel 2 XL or the Galaxy S9 Plus. Noise and graininess creeps in quite quickly and it doesn’t cope at all well with contrast between light and dark areas in the same photo.

The dual lens combination allows you to snap portrait photos with a pleasing bokeh effect, where your subject is in sharp relief and the background is blurred.

We shot a few different portraits and were pleased with the results. The subject is generally in focus with some slight blurring around the edges, especially with hair, but that’s par for the course. The only odd result we got was with Bodhi the cat – if you look at the left edge you’ll see it has decided to blur the whole side there.

When light is mixed or more limited we found the camera results a bit disappointing.

We’re told that there are AI smarts in the Mi Mix 2S camera, but it doesn’t show its workings like the floating word salad you get with LG’s G7 ThinQ, so it’s hard to know what it’s doing.

The front-facing 5-megapixel camera is entirely average. It will be fine for most people, but selfie addicts should look at another phone. The bottom right placement never bothered us – the first time you use it you’re prompted to turn the phone upside down, but it adjusts and works well whatever way you hold it and, as long as you remember to look into the lens, the results are fine.

While the camera is mostly good, it’s not in the same ballpark as the big boys. Phones like the Huawei P20 Pro, Pixel 2, and iPhone X are significantly better for photography.

There’s a sizable battery in the Xiaomi Mi Mix 2S, rated at 3,400mAh. We found that the phone lasted a normal day with some change, but you’ll likely need to charge it every night. Light use might stretch it to a day and a half or maybe two. When we played a lot of games and used the camera extensively it died on us in the early evening.

We expected a little better from this capacity, especially since the display isn’t particularly high resolution or bright. We’re pleased to find support for Qi wireless charging, though. There’s also support for Quick Charge 3.0 via the USB-C port, for when you’re in a hurry.

Looking at a direct conversion from the Chinese price, you should be able to buy the Xiaomi Mi Mix 2S for a little over $500, but when we had a look at online stores like Gearbest and Honorbuy it starts from around $625.

If you want the Xiaomi Mi Mix 2S you will have to import. It’s not going to get an official U.S. release, so it will never be in your local carrier store. Be careful where you buy to avoid import duties or problems with returns if something should go wrong. You should also check what bands the model you’re looking to buy supports to ensure it will work with your carrier’s network.

The warranty will depend on where you buy. Most online stores offer a limited one-year warranty for defects.

The Xiaomi Mi Mix 2S is beautifully-crafted, powerful smartphone with a decent camera, but it does come with strings attached. Most people simply won’t be willing to import the phone from China, so we don’t expect to see many of them around.

Yes, there are lots of better phones on the market. The Pixel 2, the Galaxy S9, and the Huawei P20 Pro are all better, but they’re also more expensive. If you’re not married to Android, then the iPhone X or 8 Plus are also better, but again, they’re much pricier.

If you only have around $600 to spend, then we recommend waiting for the OnePlus 6. It will be much easier to buy in the U.S., and it only costs $530.

You could certainly expect to get two years out of the Mi Mix 2S, but you should definitely get a case for it. In the past Xiaomi hasn’t always continued to update Android for more than a year or so, even though it does continue to update MIUI for longer, and that’s something worth considering.

Yes, if your budget is limited and you love the design, the Xiaomi Mi Mix 2S is a very classy phone. For the money we think it’s a compelling prospect.