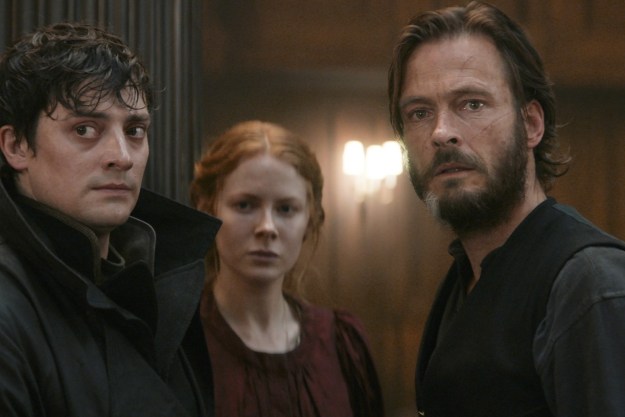 “1899 is an engaging, visually stunning sci-fi mystery series that falls short of greatness by drawing out many of its mysteries for too long.”

It’s strange to review a show like 1899 without first seeing its final two episodes. The new, richly designed Netflix sci-fi series from Dark creators Jantje Friese and Baran bo Odar is a puzzle-box mystery that takes its time pulling away the layers of its central mysteries across its first six episodes. The show’s pace is so patient, in fact, that its sixth episode ends with a reveal that stops just short of actually revealing what is really going on in the series. To be fair, it’s not hard to understand why Friese and Odar have chosen to save 1899’s biggest revelations for its final two episodes.

The creative decision, combined with Netflix’s choice to only provide critics with the first six of 1899’s episodes, does leave a reviewer like me in a difficult position, though. How, after all, am I meant to recommend that viewers tune in or skip 1899 without knowing the full scope of the show’s story? The only answer to that question is that I can’t. That doesn’t mean, however, that someone in my position can’t, at the very least, offer some insight into the various highs and lows that 1899’s first six episodes hold.

The new show follows Maura Franklin (Emily Beecham), a neurologist who buys a ticket on a cross-Atlantic trip aboard the steamship known as the Kerberos in the hope that doing so will help her solve the mystery of her brother’s disappearance. Things quickly begin to go awry on the Kerberos, however, when its captain, Eyk Larsen (Andreas Pietschmann), decides to respond to a mysterious signal from another ship. In tracing the signal, Eyk accidentally discovers the Prometheus, a steamship that Maura’s brother was not only a passenger on, but which has been missing for four months by the time that 1899 begins.

Across its first six episodes, 1899 follows Maura and a number of her fellow passengers as they all grapple, often fruitlessly, to deal with the tragedies and strange occurrences that start to befall the Kerberos following Eyk’s discovery of the Prometheus. For their part, both Maura and Eyk begin to suspect that not everything about the Kerberos’ latest trip is as straightforward as they originally thought. Contrary to what viewers might expect, though, the more questions that Maura and Eyk begin to have, the stranger and more ambiguous 1899 becomes.

The series’ numerous twists are, for the most part, surprising and compelling. There are times, however, when the show’s pacing seems to slow down to a glacial level and certain mysteries begin to feel as if they’re being drawn out merely to preserve 1899’s eight-episode structure. That’s especially the case when it comes to the show’s handling of a young boy (Fflyn Edwards) who Eyk and Maura find on the otherwise-abandoned remains on the Prometheus. For several episodes straight, the young boy simply refuses to speak, which causes his presence to eventually create more frustration than intrigue.

The same can be said for large portions of 1899’s middle episodes, which progress at such a stop-and-start rate that it’s hard not to feel like you’re being led along solely on the promise of forthcoming revelations that may very well not live up to viewers’ expectations. The show’s uneven approach to its pacing and plotting is, unfortunately, reflected in some of its characterizations as well. Both Clara Rosager and Mathilde Ollivier, for instance, bring considerable gravitas to their roles, but are ultimately underserved in parts that are underwritten and inconsistently sketched.

Thankfully, that’s not the case for many of 1899’s primary players. Beecham, in particular, turns in a standout performance as the show’s ostensible lead, Maura. Opposite her, Pietschmann brings a palpable sense of pain and paranoia to his performance as Eyk, the grieving steamship captain whose instincts are stronger than either he or anyone else truly knows. Among 1899’s supporting cast, Isabella Wei also makes a surprisingly strong mark as Ling Yi, a young Chinese woman whose backstory is far more complicated than it initially seems.

To its credit, 1899 wisely supports its strongest performances by surrounding its actors with some of the more gorgeously designed sets that viewers will likely see on TV this year. The deep browns, reds, and grays of the Kerberos, in particular, not only make watching 1899 a consistently engrossing experience, but also come together to create a visual color palette that perfectly complements the show’s steampunk aesthetic. The show’s sound design, along with Ben Frost’s score, similarly heightens and enriches its moody, dark sci-fi tone.

Whether they’re sending characters crawling on their hands and knees through passageways that seem to float uncannily in the air or transitioning from the swirl of a whirlpool into the twisting hallway of a mental hospital, Friese and Odar continue to deliver the same kind of memorable, inventive sci-fi imagery in 1899 that they did in Dark. In other words, while it remains to be seen whether or not 1899 can muster up the same kind of satisfying twists and resolutions that Dark did, there’s no denying that Friese and Odar remain two of the more distinct sci-fi artists working today.

Their latest creation is a series that feels, in its best moments, like a worthy follow-up to beloved sci-fi shows like Altered Carbon and Severance, but also like an unnecessarily convoluted, Westworld-esque sci-fi drama in its worst.

1899 is streaming now on Netflix. Digital Trends was given early access to six of the show’s eight episodes.