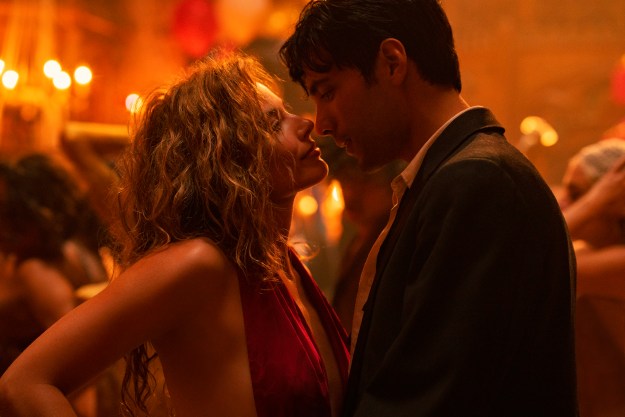 “Damien Chazelle's Babylon is a sprawling portrait of late 1920s Hollywood that just so happens to be one of the boldest and best movies you'll see this year.”

Much like the pissed-off elephant that rampages through its opening party sequence, Damien Chazelle’s Babylon is a wild beast of a movie. Over the course of its 188-minute runtime, the film maintains its cocaine-fueled, frenzied pace even as it dives headfirst into moments of wild beauty, old-school melodrama, bitter rage, and — perhaps most surprising of all — Lynchian horror. As an exploration of Hollywood’s debaucherous origins, the film has earned plenty of inevitable comparisons to American epics like Paul Thomas Anderson’s Boogie Nights, which similarly charts the sex-crazed rise and fall of one sector of the entertainment industry.

Chazelle, for his part, often invites those comparisons. Babylon’s elaborate camera movements and anxiety-ridden editing feel strikingly similar to the bravura visual style on display in its 1997 predecessor. Even one scene involving a yellow-toothed Tobey Maguire feels like a direct riff on the iconic drug deal-gone-wrong set piece that caps off Boogie Nights’ second half. However, beyond its structural and visual similarities, there’s very little that connects Babylon to Boogie Nights or Casino or any of the other American epics it has been compared to in recent weeks.

That’s because Babylon has more in common with Magnolia, Paul Thomas Anderson’s unwieldy 1999 follow-up to Boogie Nights, than it does any other film. Both movies are not only three-hour epics that feature multiple intersecting storylines, but they’re also attempts on the part of their writer-directors to understand how ugliness and beauty can exist simultaneously within the world and within each of us. In the case of Babylon, Chazelle has created an orgiastic, multi-layered film that, in the end, asks one simple question: Is it possible to love movies and yet hate the industry that produces them at the same time?

Chazelle explores that conflict through all of the film’s characters, including Jack Conrad (Brad Pitt), a silent film star who is the unofficial King of Hollywood when Babylon begins in the late 1920s. A womanizing drunk whose belief in the power of cinema alternately comes across as arrogant and childlike, Jack is invested in nothing more than pushing the boundaries of the silent film form. He is, in other words, totally unprepared for the grand shift that will reshape Hollywood once sound enters the picture.

Jack isn’t the only one who’s unprepared for what lies ahead, though. There’s also Nellie LaRoy (Margot Robbie), an aspiring actress from the east coast who arrives in Hollywood with little to her name except for her own confidence and self-professed “star power.” Nellie quickly earns the undying devotion of Manny Torres (Diego Calva), a Mexican immigrant who dreams of becoming a Hollywood big wig. Manny crosses paths with Nellie during Babylon’s sickeningly indulgent opening party sequence and the two quickly bond over their shared ambitions. As Manny, Calva turns in a deep, soulful performance, and his role as Babylon’s audience surrogate only makes his eventual moral and romantic dissolution that much more affecting.

Nellie doesn’t just catch Manny’s attention when she crashes Babylon’s raucous opening party, which is full of so many naked bodies, mountains of drugs, champagne bottles, and sex that it’s impossible not to be reminded of other, similarly excess-focused films like The Wolf of Wall Street. Nellie’s wild, attention-grabbing dance across the party’s main hall earns her a bit part in a film, where her undeniable screen presence and ability to cry on cue pave the way for her to become silent cinema’s next breakout star.

Hollywood’s inevitable transition out of its silent era quickly turns everyone’s world upside down. Nellie’s belief that she’d finally escaped the kind of judgment that had defined her early life, for instance, is shattered once her voice and east coast demeanor become points of debate among Hollywood’s elites. Jack’s untouchable presence similarly begins to disintegrate, while Manny is forced to comply with a number of soul-killing demands if he hopes to stay in the same Hollywood sphere that he fought so long to break into.

After establishing herself as a multi-talented performer and intertitle writer, Lady Fay Zhu (a scene-stealing Li Jun Li) finds herself being slowly ousted from the Hollywood system over “concerns” about her sexual relationships with women. Elsewhere, Sidney Palmer (Jovan Adepo), a masterful trumpet player whose musicianship briefly makes him a Hollywood star, eventually finds himself facing the kind of racist practices that were long used to marginalize or keep people of color out of the filmmaking industry for decades.

For their parts, both Adepo and Li turn in potentially star-making performances in roles that, despite Babylon’s impressive runtime, still feel like they were trimmed down during the editing process. Among the film’s supporting players, Jean Smart also handily steals a few scenes as Elinor St. John, a tabloid journalist who takes it upon herself in one of Babylon’s best moments to give Pitt’s Jack a frank lesson in how Hollywood can both guarantee a person immortality and see them as utterly disposable at the same time.

After operating in a steadily light mood for much of Babylon’s first half, Pitt begins to shine once Jack’s identity crisis kicks in. Very few films have ever used Pitt’s clear blue eyes as well as Babylon, which gives the actor a chance to turn in some of his most observational, quietly heartbreaking work to date. Margot Robbie, conversely, never dials down her energy in Babylon, which means that Nellie’s confident, fiery spirit in the film’s first half eventually transforms into a kind of raw, manic, puffy-cheeked desperation.

Behind the camera, Chazelle is as visually commanding as he’s ever been. Reuniting with La La Land cinematographer Linus Sandgren, Chazelle fills Babylon with some of the most elaborate camera movements and crane shots of his career, including one last-minute sweep through a crowded movie theater that is so technically impressive it’s impossible not to be astonished by it. The film’s heavy emphasis on blues, whites, and light reds also fills it with a visual energy that matches its high-strung, screwball pace. Editor Tom Cross, meanwhile, frequently cross-cuts and overlaps multiple scenes together, injecting Babylon with a breakneck pace that makes its immense runtime fly by surprisingly quickly.

The film’s visual and geographical relationship with La La Land, Chazelle’s previous treatise on the power of movies, is also literalized at points by composer Justin Hurwitz’s fittingly loud and free-wheeling jazz score. Together, Hurwitz and Chazelle literally reuse certain themes and motifs from La La Land, which only makes the dirty, rough-edged nature of Babylon feel even more like a full-throated response to the more polished, sanitized exploration of Hollywood that Chazelle delivered back in 2016. All of the film’s thoughts on Hollywood and filmmaking then culminate in a finale that is so brazen and operatic that it’s practically impossible not to be taken aback by Chazelle’s, well, gumption.

The fact that Babylon’s finale doesn’t totally work is beside the point. What’s more important is the reckless, French New Wave-inspired energy that courses through the film’s final moments, which not only calls to mind the work of filmmakers like Godard and Truffaut but also Paul Thomas Anderson, who chose back in 1999 to conclude his most ambitious Los Angeles odyssey by having frogs literally fall from the sky. While Babylon’s finale isn’t quite as fantastic or surreal as that, it does pulse with a similar kind of fearlessness. For better or worse, it’s hard to imagine Chazelle ending Babylon in any other way than he does.

Across the film’s massive and yet paradoxically too-short three-hour runtime, Chazelle expresses his all-consuming reverence and distaste for the movies. The true brilliance of Babylon‘s finale, however, lies in how it so clearly sees that any attempt to understand how someone can both love and hate the movies at the same time will ultimately fail. Films are, after all, as unexplainable as the people who watch them.

Considering the conditions under which they are made, no movie should work, and yet so many do. In Babylon, Damien Chazelle attempts to ask why — only to give up when he realizes, much to his horror and amazement, that there is no answer to that question. There is only the silver screen and you sitting there, looking up at it, crying even when your better self knows that you shouldn’t. Behold! The magic of the movies.