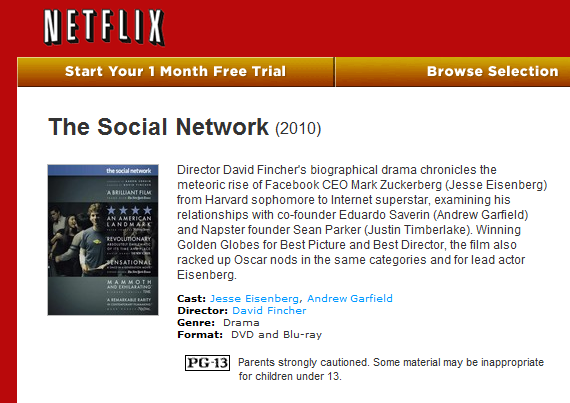 It’s tale as old as time – or close: Streaming service has content yanked by label because of largely unacknowledged legal holdups. Netflix has fallen victim to this dilemma before and now it will again as Starz has told Netflix to pull Sony movies while the subscription service works out a new deal with the label. The two upsides to the situation are that Netflix is only forbidden from Sony content for the week, and that Netflix and Sony aren’t the ones duking it out – because in those cases, the streaming service usually loses.

Netflix VP of content acquisition Pauline Fischer addressed the issue straight on in a blog post, stressing that Sony movies will be back. “You may have noticed that Sony movies through StarzPlay are not currently available to watch instantly. This is the result of temporary contract issue between Sony and Starz and, while these two valued partners work through their differences, we hope you are enjoying the wide variety of new movies and TV shows added daily.”

A few years ago, Sony and Starz reached a long-term agreement allowing Starz access to more than 500 Sony movie titles as well as the rights to offer up the content on various platforms (including Netflix). The deal was supposed to last until 2014, but Deadline reports that Starz reached an IP distribution cap and now has to reevaluate the terms. And while Netflix is a victim in this debacle, its remarkable growth is possibly to blame here. If you were planning to watch Salt or The Social Network this weekend, you might want to make other plans.

The best shows on Netflix right now (September 2022)
The 70 best movies on Amazon Prime Video (September 2022)
What’s new on Netflix and what’s leaving in October 2022
The 10 most popular movies on Netflix right now
Ana de Armas: from badass Bond girl to Blonde’s tragic Marilyn Monroe
Confess, Fletch director on Jon Hamm, Chevy Chase, and screwing with jerks
Andor review: Rogue One prequel is slow-burn Star Wars
Heardle today, September 22: Answer, hints and help for song of the day (Thursday)
Framed today, September 22: Answer and hints for the movie of the day (Thursday)
Everything we know about Ant-Man and the Wasp: Quantumania so far
Most powerful Star Wars villains ever, ranked
Paramount+ launches Peak Screaming collection for Halloween
Everything Everywhere All at Once’s Larkin Seiple on the feel-good movie of 2022