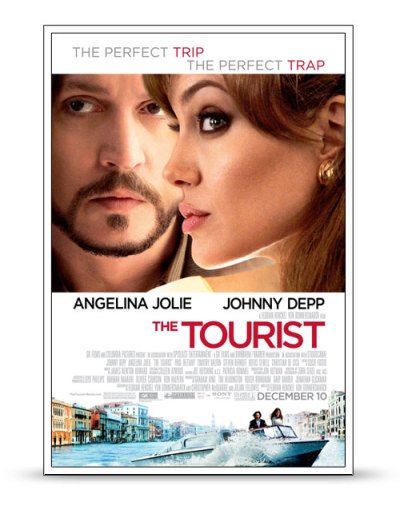 For as much star power as The Tourist has, you might expect something that could go one of two ways. On one hand, you could get a drama so intense that the Academy Board would simply show up at the movie premier and grudgingly hand the cast and crew a box full of Oscars. On the other hand you might have a film that is simply a fun time for the actors, and is possibly an excuse for them to work together with perhaps a trip to somewhere exotic thrown in, ala Oceans 11 (and Oceans 12, and Oceans 13). The Tourist is definitely more on the side of Ocean’s 11, and while Johnny Depp and Angelina Jolie both turn in decent performances with what they are given to work with, the characters become slaves to a plot, which often has them act in bizarre and contradictory ways.

Directed and co-written by the impressively named Florian Henckel von Donnersmarck (Writer and director of the German film Lives of Others, the 2007 Oscar winner for best foreign film), The Tourist represents the first English language film for Donnersmarck. While Donnersmarck definitely has an eye for beauty, his pacing and dialogue skills need serious work.

It was a simpler time

The Tourist harkens back to the caper and romance-thriller films of the 50s and 60s, when the lead actor and actress sold the film based on their own charms, and expected the audience to find the plot holes and unrealistic scenarios charming. It is a cousin to older films like To Catch a Thief, and Charade, but lacks the skill of either. Picture Depp as Carey Grant, and Jolie as Audrey Hepburn, and you have an idea of what to expect. Although minus the chemistry. More on that in a bit.

The Tourist is a decent movie, but also something of a hollow one. There is a mystery strung throughout, and the resolution is a bit off. I won’t spoil it, but it is not very satisfying, and that is ignoring the numerous logical problems it presents. Of course logic is not something this film thrives on, so that won’t be much of an issue.

The city and settings are amazing, and the film carries a European vibe that is both romantic and lush, but looks alone cannot make up for all the other problems. That being said, at least The Tourist is a very pretty movie, but it is sort of the equivalent of a Lamborghini with a Ford Taurus engine .

To catch a Depp

The title of the film refers to Depp’s character of Frank Tupelo, a math teacher from Wisconsin that is travelling from Paris to Venice, when a mysterious woman named Elise Clifton-Ward (Jolie) approaches him. Elise is attempting to stay one step ahead of Interpol, and approaches Frank after a letter from her former lover Alexander Pearce–a criminal wanted in 14 countries for financial crimes– instructs her to find a man on the train that is roughly the same height and build.

The police soon realize that Frank is a patsy, but an English gangster named Shaw (Steven Berkoff) is led to believe that Frank is in fact Pearce, post-plastic surgery. Pearce stole over $2 billion from Shaw–which he wants back–and from which Interpol wants the taxes off—$774 million pounds. Once in Venice, Elise easily convinces Frank into staying with her, where they kiss, setting off a series of events revolving around Frank’s mistaken identity, while Elise hunts for the real Pearce, all the while attempting to stay one step ahead of Interpol.

Despite it all, Elise and Frank begin to fall for each other, but the mysterious and unseen Pearce continues to pull Elise’s strings, Interpol remains on the hunt, and Shaw is willing to kill to retrieve his money.

The plot is a mix of two old classics, the “mistaken identity” and “the action romance” films. While the actual story is based on a 2005 French film that most haven’t watched, you will feel like you have seen this movie several times before. Just this year in fact, Knight and Day, Killers, and a few others all tread over similar ground. The only real twist is that the female lead is the action oriented one, while the male role is the one in constant jeopardy.

But once you accept the movie for what it is, The Tourist seems to assume that the plot is almost secondary, and it simply hurtles along. The movie begins with something of a joke, as Elise is followed from her Parisian apartment to a coffee shop by an unmarked police van that remains just feet behind her, but is never mentioned as being unusual. This seems to be the cinematic equivalent of the movie giving you a wink and hoping you are willing to accept the unreality in favor of the total package.

This idea of “just go with it” is further emphasized by Elise, who is beautiful. Not just turn-and-look-attractive, and not just because Jolie is beautiful, but beautiful to the point that it is nearly magic. She not only turns heads, she turns EVERY male head, and even causes seemingly controlled professionals to utterly lose their minds–and nobody seems to think it is odd. It is meant to be just part of the good natured humor of the film, so you need to be willing to accept it.

The hunt for Pearce is also so easy to poke holes into that it borders on painful. To give you an idea, the police were on to Pearce for over a year before he disappeared. The story suggests that this is two years later, which contradicts other established timelines, and would mean that the operation against Pearce began three years earlier, despite the fact that he had not actually committed the big crime they were specifically hunting him for. Or they knew where he was for a year after the crime, and were too busy to actually capture him. In that time, neither Interpol nor the London police could find a single picture of him. Even though they were onto him for over three years, and even though every piece of logic suggests that they might have found an old pic somewhere. And during all that time, Interpol, in all its wisdom, decided to begin a million dollar manhunt for a guy that had stolen a mobster’s money, while seemingly being ok with the mobster himself. This also does not seem to factor in the ridiculousness of taxing stolen money.

If you think too hard about the plot, it will make your head hurt. You sort of expect a tongue in cheek plot with action romances like this, but most of the problems are so big that they are hard to miss, and most of them could have been corrected with either another look at the script, or a better continuity editor.

There are several other similar problems, and all of which seem to be either an oversight, or explained in a version of the film that never made it past the cutting room floor.

Enough star power to save the world

If all the stars in this film decided to join their philanthropic power and assembled their money together, they could probably cure death. There are a lot of famous faces assembled, which further highlights the fact that although this movie had a shockingly high budget of $100 million (most of which had to go to the payroll), the stars all seemed to be involved for the experience, and perhaps the free trip to Venice.

Along with Depp and Jolie are Paul Bettany as the befuddled Interpol Inspector John Acheson, Timothy Dalton as his boss Chief Inspector Jones, Berkhoff, and Rufus Sewell. Dalton and Sewell are minor characters who appear to facilitate the plot, while Berkhoff and Bettany both represent antagonists of the movie in their own way.

While the acting is fine, it is the logic of the characters that is a problem. Depp and Jolie seem to be following a script that was half complete, and the witty banter you would assume to find, is just missing. It feels like there was a great deal of dialogue that must have been cut from the film, and as a result the chemistry between them suffers.

The film originally changed actors and directors several times, as well as screenwriters, and while only three names are listed under the writing credits, odds are many more had a hand in this film. Somewhere along the way something was lost. While the original idea most likely remained, the interaction between the characters is left to the actors, who try their best, despite some terrible dialogue at times.

When Jolie and Depp have their two, and only two, chances to speak together before the action starts, both times the conversation feels like the start of something that never goes anywhere. They talk, share a drink, then seem to just be in love despite the fact that both previous conversations were brief and dull. If you are not a fan of either Depp or Jolie, the story will not win you over, and you might walk out of this film shaking your head.

The most glaring issue with the script is best exemplified by Paul Bettany’s Inspector Acheson, who is sometimes heroic, and sometimes utterly ridiculous. Bettany seems to try his hardest to play the character as a driven man who has failed so many times that he has been pushed to the point of nearly becoming a villain in order to catch his nemesis Pearce—sort of a modern day Javert from Les Miserables, hunting the beleaguered Jean Valjean. Acheson seems to be willing—even happy—to overlook pesky little things like murders going on right in front of him in order to catch what is essentially a white collar criminal, even if stopping the murder would in no way compromise the case, and even when his people are begging him to let them intervene. Basically, he is a sociopath, and one that simply muddles the plot rather than offering anything that adds to it.

By comparison, Shaw, who actually is the villain, is somewhat tame. He does pull off an asinine murder in front of witnesses for no real reason, and he is constantly committing crimes that Interpol seems to not care about. But at least he is consistent.

The best part of this film is that it is filmed in Venice, and the city looks beautiful. In fact, the entire movie is filmed exceptionally well, and there is a crisp and vibrant feel that almost covers up the lack of chemistry between Depp and Jolie, the massive plot holes and the inconsistent characterizations.

If you can overlook all of that, and if you accept from the start that the plot is not meant to be taken too seriously, then you are left with a film that is fun, albeit forgettable.

A beautiful setting in Venice, and overall great cinematography. A few genuinely funny moments, almost always coming from Depp. A fun time if you are willing to overlook major parts.

See the entire review above. Muddled plot. Schizophrenic and illogical characters. Depp and Jolie have no chemistry, which may be a result of either bad dialogue, or poor editing.