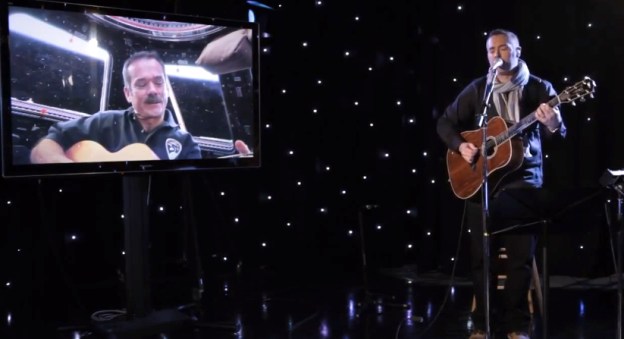 International Space Station astronaut Chris Hadfield is, by all accounts, having a whale of a time 240 miles above Earth, tweeting some stunning images from his window on the world, recording a track live with Barenaked Ladies frontman Ed Robertson, posting a variety of space-based audio clips on social sound-sharing site SoundCloud and even finding time for a live video exchange with William Shatner of Star Trek fame.

And the fun doesn’t stop there. At the end of the month he’s set to take part in NASA’s first ever live Google+ Hangout from the ISS with fellow astronauts Kevin Ford and Tom Marshburn.

Hadfield’s images, which the Canadian astronaut has been posting on his Twitter feed since arriving at the space station in December, are a compelling mix of night and day shots, featuring a contrasting mix of locations around the world.

On Sunday evening he posted a beautiful image (below) he introduced as “tonight’s finale”.

“From here to the horizon to forever – a quick glance out the window of the Space Station,” Hadfield wrote in his tweet.

Check out a couple more of his images below:

Hadfield was in the news again last week when he and Barenaked Ladies vocalist Ed Robertson performed and recorded the first ever duet from space and Earth. The song, ISS (Is Somebody Singing), was recorded with the help of a high school choir from Toronto and was broadcast for the first time on Canadian TV last Thursday (watch it below). Both Hadfield and Robertson sang and played guitar, while belting out lines like:

“Eighteen thousand miles an hour, fueled by science and solar power, the oceans racing past; at half a thousand tons, ninety minutes to moon and sun, a bullet can’t go half this fast.”

The astronaut will also set another record before the end of the month, becoming part of NASA’s first ever live Google+ Hangout from the ISS. Space fans are invited to get involved, with NASA inviting questions via YouTube, the best of which will be selected for the February 22 Hangout.