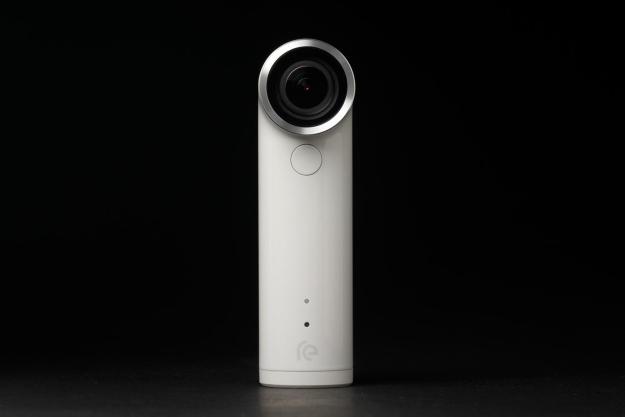 “HTC’s funky Re breaks away from boxy GoPro wannabes with a periscope-shaped design, but doesn’t do enough differently to justify its $200 price.”

It seems like every day, there’s a new personal camcorder out there. From simple single-function lifelogging cameras to GoPro-wannabe action cams, manufacturers see a big pie filled with opportunities. Now, add HTC to the mix.

That’s right, HTC, the mobile phone giant. Its new Re camera ($200) departs from the world of phones and tablets to offer a unique twist on the action cam, using a design that’s more periscope than box.

But has HTC created something truly different and cool, or is it just one more “me too” product in a crowded market?

The Re is the same size and shape as an upside down asthma inhaler – you hold it with a pistol grip. The durable white plastic exterior makes it dustproof and waterproof (down to 3.2 feet, for 30 minutes). You can’t go deep-sea diving, but you can have some fun shooting at the shallow end of the pool. An optional waterproof cap makes it waterproof down to almost 10 feet, for two hours.

There are only two buttons: a shutter button under your thumb, and a slo-mo switch beneath the lens. One tap of the shutter snaps a photo, or holding it down starts video. An LED embedded in the shutter button flashes colors to indicate you’re in slo-mo mode, and another shows healthy battery life in green, or orange when it dips below 25 percent. Also on the front are a speaker (the camera makes shutter sounds to indicate when a photo is snapped, for example), and a grip sensor to wake the camera up for duty. There’s a “HD microphone” at the top.

A sealed cover on the bottom hides the MicroSD memory card slot. HTC provides an 8GB card, but the Re supports up to 128GB, and we recommend you get as much as you can afford, since these cards can easily fill up. There’s also a Micro USB port for charging and data transfer. A handy tripod socket is useful for both accessories like a lanyard or specialty mounts; we were able to use it with our trusty Manfrotto hand-grip tripod – something we couldn’t do with the Hero4 Silver or Polaroid Cube we recently tested.

You can’t go deep-sea diving, but you can have some fun shooting at the shallow end of the pool.

The Re’s ultra-wide-angle, f/2.8 lens captures a 146-degree view, giving you that fisheye look common with action cameras. The lens can also be set to shoot in a standard narrow view. Inside is a 16-megapixel 1/2.3-inch CMOS sensor – a typical size found in point-and-shoot cameras. The Re can capture video at either 1080p or 720p at 30 frames per second (fps), and slow-motion video at 720p/30fps. You can also set the camera to create a time-lapse video, in which the camera shoots 16MP photos in timed increments.

You would be lucky to get two hours from the Re’s embedded 820 mAh battery, which is rated for 100 minutes of video (or 1,200 photos). In our testing, which consisted of a mix of shooting photos and videos, we achieved about 1.5 hours. Since you can’t swap it out, it’s best to pair it with a portable USB charger.

The Re has both Wi-Fi and Bluetooth Low Energy, the latter is for pairing purposes. HTC’s Re companion app (for both Android and iOS) can be used as a live viewfinder, to change settings, format the card or reset the camera, and view content.

For our review, HTC provided the Re camera, Mini USB cable, and an AC power adapter. The final consumer package may include other items; we will update this section should that be the case.

Out of the box, the Re is set to Full HD 1080 at 30 fps, 12-megapixel medium-resolution 16:9 photos, wide-angle off, and video stabilization on. There’s no power button: just pick it, push the shutter button, and you’re ready to go. For our purposes, we turned the photo resolution up to 16 megapixels (4:3 ratio), and turned the beeps down to low (otherwise, it makes really high-pitch and irritating sounds – not idea if you’re planning to be stealthy). We turned the ultra-wide-angle function on during the time we didn’t use our phone as a viewfinder.

HTC claims the Re lets you “focus on the moment, not on your camera.” That’s true of all action cams without displays, which force you to shoot blindly and hope you’ve captured the magic shot. Shooting basic video is a no-brainer, but to unlock more advanced features like time-lapse video, or tinker with settings, you have to use the companion app. It would have been nice to have a small monochrome LCD to adjust settings, like the GoPro Hero and Sony Action Cam.

We used the Re in a variety of ways: handheld, on a table, and mounted on a tripod for time-lapse videos. But one of our favorite uses was slipping it in a front shirt pocket, pushing record, and just walking around. This is how we realized it makes a fine lifelogging camera; you don’t know what you’re recording, but it’s fun to view the footage later and relive your day. Unfortunately, the shutter button is prone to accidental presses, so we also shot a lot of nothing.

Performance wise, the camera is ready to go once you pick it up. Press the button and it quickly shoots a photo. Because there isn’t any image stabilization and shot-to-shot times are slow, you want to hold it as steady as possible. Video recording starts up quickly as well. And no, you can’t snap a photo while you’re recording video.

Slo-mo videos are easy to shoot – just record and the camera slows it down. But because it’s in 720p resolution, the video quality doesn’t look at crisp (albeit smooth) and colors look soft and washed out.

For time-lapse shoots, you can set the resolution up to 30 fps, and adjust the interval (in seconds) between shots and how long you want the camera to shoot for. We like that the app tells you how long your final video will be and how many photos will have been taken, based on your settings.

Photos are generally good, comparable to what you would get from a pocket point-and-shoot camera or smartphones. Our photos had good coloring (if a tad on the dark side due to cloudy weather) and details, and fairly sharp and readable text … until we blew them up to their full sizes and viewed on a sharp display. There, we noticed all the imperfections like noise and splotchy and washed out colors. If you keep them at medium sizes, the photos are fine for sharing online or even making small prints.

The Re shoots OK-looking videos. They aren’t bad, but they aren’t as detailed as we would like, and colors look a bit soft and washed out. We also noticed some slight hiccups in the video, and noise is evident. Video stabilization worked well.

For reference, we tested the Re against the new GoPro Hero4 Black, and the difference was like night and day on 1080p/30 fps videos. The GoPro produced a crisper video with more vivid colors. Sure, the Hero4 Black is a premium product at $500, but GoPro also has a new entry-level model, the Hero, that does 1080p at 30 fps, and costs just $130. HTC is entering a crowded field that has pretty good products not just from GoPro, but also Sony.

As for low light, don’t bother. Videos and photos are noisy, colors are murky, and you can barely make out anything.

Pairing the Re with a phone to adjust settings and use it as a remote viewfinder is relative straightforward. HTC’s app uses Bluetooth to first find the camera, then pairs it with your phone via Wi-Fi. Every time you launch the app, you’ll need to pair with the camera again in your Wi-Fi settings. It’s not as quick or elegant as the GoPro app, but it works – most of the time. Sometimes the streaming connection wasn’t smooth, and the picture would often freeze when we moved the camera around. After we reset the camera to factory default settings and repaired the camera and phone, the connection greatly improved. We also had issues connecting it to a Moto X after first connecting it to an iPhone 5S. It has to be manually removed from the iPhone first – a bit annoying, since the GoPro app had no issues with switching between phones.

Despite our initial qualms, the Re turned out to be fun to use, and if you don’t expect too much out of it (like moviemaking chops), it does the job. Photo quality is good, and video is OK, but it stands out from the crowd with its unique and effective design.

HTC is shying away from GoPro comparisons, but its price makes that impossible. At $200, it’s pretty expensive, considering the Polaroid Cube costs $99 and GoPro’s new Hero costs $130. Here, the price does not justify the end product.

The Re is designed to work as a standalone product, but we found ourselves using it with our smartphone more often than not. Which raises the question: Why not just ditch the Re and shoot with the smartphone? The video quality is similar, aside from the wide-angle lens, which you can add to a for far less than $200.

While the Re’s unique periscope shape makes it an interesting lifelogging camera, its short battery life and touchy power button hobble it there, too.

HTC’s funky Re breaks away from boxy GoPro wannabes with a periscope-shaped design, but doesn’t do enough differently to justify its $200 price. We think HTC is onto something, but it needs to turn up the volume – and maybe down the price – in its second attempt.

Topics
Intel’s upcoming laptop CPU may destroy even the best desktop chips
Best Samsung Galaxy Note 20 deals for December 2022
Google is now supporting my awful browser habits, and I love it
Old tech sounds preserved as part of huge audio project
Boston Dynamics’ festive robot video has a surprise ending
Overclockers surpassed the elusive 9GHz clock speed. Here’s how they did it
Amazon starts drone delivery trials in California and Texas
What to expect at CES 2023, from mondo TVs to EVs
12 high-profile tech opportunities for those job hunting
Make tech work for you: 10 side gigs to make extra money for the new year
CES 2023: Intel’s new 13th-gen CPUs are faster, cheaper, and more efficient
GeForce Now upgrades to RTX 4080 for 4K 240Hz cloud gaming
Nvidia brings the mighty RTX 4090 to laptops at CES 2023