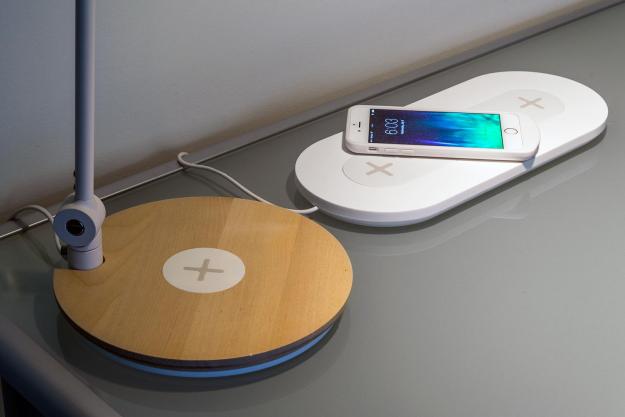 “Ikea’s wireless charging furniture makes you feel like the future is here… if only they’d left the iPhone case in the past.”

The biggest problem with my iPhone’s Lightning cable is that it’s my cat’s favorite thing to chew. He leaves lamp cords alone but my bite-sized Mac and phone chargers are covered in tooth marks. It’s as good a reason as any to try Ikea’s Nordmärke triple charging pad and Riggad work lamp. Part of the company’s new line of wireless charging furniture, both promise to safely and effectively charge smartphones without any cords. They worked as advertised — but still have a few drawbacks.

I’ve never put together an easier piece of Ikea furniture. The pad took zero assembly, and all I had to do was use my fingers to screw in the top of the lamp to the base, no tools required. Counterintuitively, the instructions had more words than any Ikea product I’ve gotten, mostly warnings about electric shock and radio frequency. Turning the lamp on is a snap; you just give the back of the shade a click. As someone who’s had every knob fall off my floor lamps, I appreciate having something that I can’t dislocate.

The lightweight charging pad looks like a flattened white pill and has three Xes (or plus signs, depending on how you look at them). To be able to accommodate three phones, it’s 12 inches long and 5 inches wide. There’s also an extra USB port, so you can charge the old-fashioned way. The cast-iron and birch lamp also has the extra port but just one wireless charging spot. It’s over four pounds, which seems a little heavy for a desk lamp, especially since the Nordmärke is 15 ounces. The lamp’s light bulb is an LED, meaning it should last around 25,000 hours, and its light output is 400 lumens, similar to a 40-watt incandescent.

The most eye-catching thing about the very-Ikea-looking products was the size of the adapter. While I could plug both in at once, they are still really oversized.

I found myself ditching the drab, oddly textured Qi case whenever my phone was done charging.

Ikea’s charging pads use the Qi wireless standard, and many great phones support it — except Apple’s. To get my iPhone 6 to work with the lamp and pad, I had to slip off my bright blue, rubberized case and exchange it for the furniture maker’s plastic Qi adaptor Vitahult, which was sort of cream colored and bulky at the bottom. This is one of the biggest drawbacks to the charging furniture. There are some Android phones, like my old Samsung Galaxy Note II, which would also require a different backing or receiver to reap the benefits. I found myself ditching the drab, oddly textured Qi case whenever my phone was done charging — mostly because I couldn’t even plug in my headphones. The extra swatch of plastic made the jack too far away, though I wasn’t using iPhone earbuds. Also, the case was worthless if I wanted to charge my phone the usual way, because it didn’t fit my Lightning cable.

Charge of the light brigade

Once my phone was properly attired, I could just plop it on the lamp base or charging pad. The X marked the spot pretty well, and I almost always made a connection instantly. There were only a couple times when I had to wiggle the phone around a little before it started charging. Because my phone is always on vibrate, I was a little worried that the buzzing of notifications and texts would knock it into a no-charge zone, but that never happened.

All in all, it took only a few minutes more to charge with the pad or lamp than with my cable. For example, when my phone was on 79-percent battery, it took 30 minutes to get back up to 98 with the lamp, while it was at a full 100 percent with the cord. It was a bit of a drawback that I had to hover over the lamp whenever I got a message, so as not to interrupt the charging process. Yes, cords are a leash, but at least they give you some leeway. I could never read in bed on an almost-dead phone using Ikea’s technology. Still, I’m not touching my phone when I’m asleep, which is when I charge my phone most often.

One side effect of the wireless charging is that it heats up your phone. Half an hour of charging raised my phone’s temperature to 98 degrees, making it warm but not alarmingly so.

iXCC Lightning Cable (Starting at $8)
Does your cat eat your cables, too?

If you tend to decorate around your outlets, Ikea’s wireless charging furniture won’t solve your problem. The furniture, whether it’s just a pad or a whole bedside table, still needs an outlet for its rather bulky plug. But it will de-clutter your countertop and maybe even give your cat one less wire to chew on. iPhone users, caveat emptor: This will add some heft to that device, because Apple’s devices just don’t work with the Qi technology. Many Android smartphones have the advantage here.

As an iPhone user, I wasn’t completely sold. But if I didn’t have to constantly switch out a phone case, the allure of a cordless nightstand is much clearer. Like my side table.

Topics
Video-editing app LumaFusion to get a Galaxy Tab S8 launch
This gadget could turn your M1 Mac into a productivity beast
The Framework laptop is officially Thunderbolt 4 certified
Best Samsung Galaxy Note 20 deals for November 2022
This ASRock gadget turns your PC case into a proper monitor
We’re lovin’ this official McDonald’s gaming chair — the McCrispy Ultimate
Scientists find a surprising answer to the future of computers — paper
EVGA’s lost RTX 4090 prototype shows us what could have been
Microsoft’s DirectStorage can now boost your game loading times by 200%
Here’s how you could protect your RTX 4090 from melting
Someone built a PC in a microwave, because why not?
Update Windows now — Microsoft just fixed several dangerous exploits
Nvidia’s RTX 4080 12GB may soon return, but not how you think