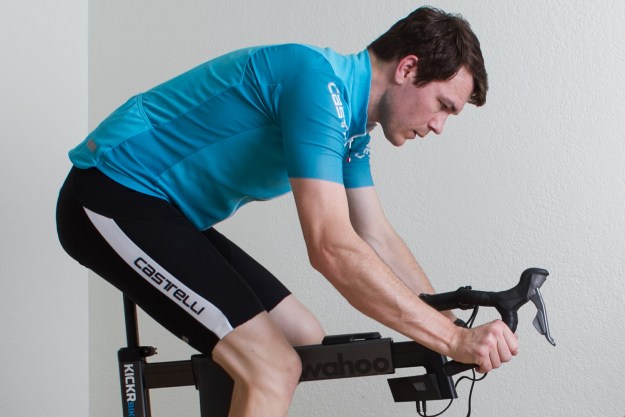 “The Wahoo Kickr BIKE’s ability to simulate a real-world ride through tilting, shifting gears, and resistance is mind-blowing.”

The fitness world constantly chases innovative ways to have you looking and feeling your best. From the hula hoop to the Shake Weight, the fitness industry is an ever-changing beast that clones itself year after year, with minor alterations purporting to be “game-changers” for your health. Take the exercise bike. Since the word “fitness” became ubiquitous with personal health, the exercise bike is the same that it has been since it first came out. Well, until now.

The Kickr BIKE is built to emulate how a bike works in the real world. Traditional exercise bikes have a flywheel that you manually adjust to increase the resistance. With the Kickr BIKE, the resistance is altered through magnets and an electric motor that change as you bump through gears, as well as changes in grade. The feel is much like riding a real bike.

Get Ready to Rock and Roll

How does a stationary bike change grade, you ask?

The Kickr BIKE is smart, so it can pair up to virtual training programs like Zwift where you can go for a virtual ride. The Kickr BIKE will respond with either increased resistance if you’re headed up a hill, or keep the wheels rolling if you’re cruising down a descent. While you’re shifting gears to deal with the hill your avatar is tackling, the Kickr BIKE will tilt back to match the gradient, putting you in a position on the bike that is exactly what you’d experience on the road.

Before you get to hill tackling and avatars though, you need to set the Kickr BIKE up. First, you’ll download the Wahoo app, which lets you connect to the Kickr BIKE via Bluetooth for setup, and has a host of instructions for assembly and general FAQs. Once everything is put together (which took me about 20 minutes) all you need to do is plug the Kickr BIKE into a standard outlet and start pedaling.

On its own, the Kickr BIKE and the free Wahoo app will have you spinning and doing simple workouts. That includes adding wind resistance to a ride or using ERG mode. These are advanced features on their own, but they don’t use the Kickr BIKE’s full potential.

Since there’s no touch screen on the Kickr BIKE, and the training programs on the Wahoo app are slightly limited, incorporating third-party training programs like Zwift is key. Being able to see a hill coming up, and having the resistance gradually increase in a natural way, allows you to stay zoned in on your workout. All the while your miles, regardless of what training route you choose, can still be logged on Strava, Apple Health, and a slew of other fitness apps.

I’ve never been one for gimmicks, but the Kickr BIKE’s ability to simulate a real-world ride through tilting, shifting gears, and resistance is mind-blowing. Not just because you can zone in on the task at hand (destroying a half-mile segment for a new PR), but because it teaches you how to be a better cyclist.

Maybe being a better cyclist isn’t on your list of priorities. Still, if I have to choose between paying for spin classes or riding the Kickr BIKE in Zwift, the choice is easy. The Kickr BIKE is way more fun.

Appealing to the Cycling Enthusiasts

If you’re a serious cyclist, there’s no comparison. With the adjustability of the Kickr BIKE, you can mimic your real-world bike exactly. There’s even a “Bike Fit Wizard” that lets you take a photo of your personal bike to get close numbers for setup in terms of size. The Kickr BIKE uses standard parts, so you can throw on your handlebars, saddle, pedals, and even adjust for crank length if you want.

You can also match the Kickr BIKE to your outdoor bike by customizing the gearing with different drivetrains. It can handle one to three chainrings and 9 to 12 speeds, recreating an experience that is exactly how it is in the real world. It even simulates the small bumps in resistance when you change gears — but with the Kickr BIKE, you never have to worry about losing a chain.

You can match the Kickr BIKE to your outdoor bike by customizing the gearing with different drivetrains.

That was a lot of jargon for the bike nerds to geek out on, but therein lies the secret charm of the Kickr BIKE. The marketing of this piece of equipment would make you believe that only serious cyclists would be able to sort through the intricacies of the Kickr BIKE. But Wahoo’s incredibly easy to use app makes setup and use a cinch.

With all the information right there in front of you, trying out different formats by changing gearing or dialing in your preferred crank length will allow a novice the chance to become acquainted with cycling. If you have zero interest, the Kickr BIKE has a feature called ERG mode that, when paired up with a training app, will completely take over all resistance duties and have you pedaling to apredetermined power output for interval training or general exercise.

In short, it doesn’t matter if you’re a cyclist. This is a great exercise bike. Period.

So, what would keep you from buying a Wahoo Kickr BIKE? The price. At $3,499.99, it certainly doesn’t come cheap. You’ll also need to sign up for a training program like Zwift to get the most out of all the features the bike has to offer, and that will run you $14.99 per month.

In short, it doesn’t matter if you’re a cyclist. This is a great exercise bike. Period.

If you’re only looking for a fitness aid, those prices make a Peloton seem fairly reasonable, and other exercise bikes a steal. But to judge the Kickr against these not-so-smart exercise machines is like comparing your old Nokia 5110 to the iPhone 11.

One year material and workmanship warranty.

The Wahoo Kickr BIKE has completely changed the way I look at indoor training. The 200-plus miles I’ve put on the Kickr BIKE were the most fun I’ve had riding a bike indoors. By bringing most of the positives of a real-world ride into the safety of my home, I don’t know how I’m going to go back to a regular trainer.

The closest competitor is Tacx’s NEO Bike. It’s a smart trainer, so it has some similar features. However, instead of tilting the bike to match the current gradient the Tacx does a simulated road-feel that essentially mimics the bumpy nature of gravel, cobbles or smooth roads. At $3,200 the Tacx is slightly cheaper but in our estimation, and without riding the Tacx, the Wahoo is the obvious choice because of the ease of use and customizability of all the components.

The Kickr BIKE feels built to last. It is sturdy and never creaked or complained about the efforts I threw at it. Even more impressive is Wahoo’s inclusion of additional, currently unused buttons for future functionality. This sort of preparation has me convinced that, with additional firmware upgrades, the Kickr BIKE will only get better.

Yes. The Kickr BIKE revolutionizes indoor cycling from “just another workout” to a completely immersive experience for anyone who wants to hop on.

Topics
Mirror’s stylish smart dumbbells and ankle weights track your form
Amazon Halo View launches alongside new nutrition and fitness features
Apple Fitness+ now lets you work out with your friends
MYXfitness joins Beachbody Company, releases updated indoor cycle MYX II
A keyboard with its own CPU and GPU? Yes, it’s real — and it’s coming soon
The dream isn’t over — AMD’s RX 7900 XTX may still hit 3GHz
Great, now even the RTX 4090 power connectors are starting to melt
Best Samsung Galaxy Note 20 deals for November 2022
Nvidia’s RTX 4080 may be up to 45% slower than the RTX 4090, but it’s still pricey
We’re lovin’ this official McDonald’s gaming chair — the McCrispy Ultimate
Scientists find a surprising answer to the future of computers — paper
The Framework laptop is officially Thunderbolt 4 certified
EVGA’s lost RTX 4090 prototype shows us what could have been