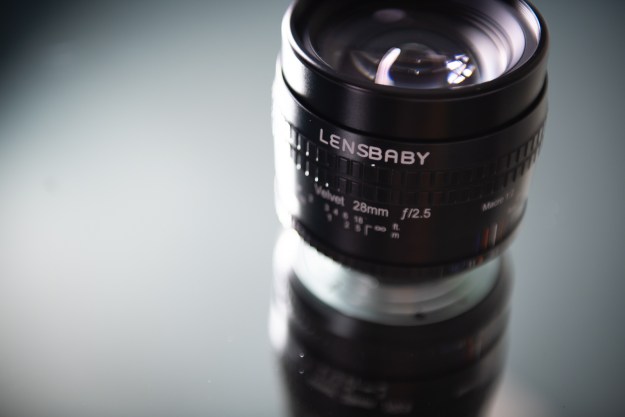 “With a dream-like glow, the Velvet 28 is an excellent creative tool -- for the right photographer.”

If McDreamy was a lens, it would be the Lensbaby Velvet 28. From the company known for its lenses that eschew optical perfection in favor of creative effects, the Velvet series is designed to capture an ethereal glow.

While most lens manufacturers aim to design the sharpest, distortion-free lenses possible, the Portland, OR-based Lensbaby is an art lens company that embraces the weird, unusual, and surprising. Its simple, electronics-free lenses create a variety of in-camera effects, from swirly blur to a controllable vignette.

Like the Velvet 56 and 85 before it, the Lensbaby Velvet 28 creates a soft glow that’s strongest at wide apertures and dissipates as the aperture narrows. The wider focal length brings the effect, popular for headshots and floral close-ups, to landscapes and environmental portraiture. Close-ups also remain an option, as the Velvet 28 maintains the 1:2 macro capabilities of other Velvet lenses.

Launching on April 21 for $550, the Velvet 28 is a manual focus lens that comes in both DSLR and mirrorless mounts, including Canon EF, Nikon F, Canon RF, Nikon Z, Sony E, Fujifilm X, and Micro Four Thirds. We tried out an early Nikon F-Mount model to see what kinds of shots this new Lensbaby can dream up.

While the Lensbaby Velvet 28 looks a bit different than the rest of the high-end lenses in my kit, it still feels ready for professional use. Although it lacks autofocus and autoexposure, the all-metal body is sturdy and well made.

It’s a hefty lens, but the short stature and lack of an autofocus motor help compensate for that. It doesn’t feel terribly heavy on the front of my Nikon D850, a fairly large DSLR. This version of the lens weighs a touch over a pound, while the mirrorless version weighs about 1.3 pounds.

The focus ring takes up most of the lens barrel. As a manual-focus lens, the ring turns smoothly and has many more degrees of travel than a typical autofocus lens, making minute adjustments possible. There is also a traditional aperture ring, as the lack of electronic contacts mean you can’t control the aperture from the camera.

Note: We tested a preproduction model of this lens. The exterior will have some minor changes from the lens pictured, including labeling the f/22 aperture setting.

Manual focus can be both good and bad. Good, because manual focus forces you to slow down. And when you slow down to get the focus just right, you may also be more inclined to put more thought into the composition.

But, there’s no denying the convenience of autofocus. While focus peaking on mirrorless cameras and in the live view mode on DSLRs simplifies the task, getting a sharp shot takes more time and effort. Capturing a sharp image on a lens that’s both manual focus only and designed to be a bit soft is tough. The best way to get a sharp shot is to focus with the aperture at least f/4, then open it up if needed before shooting. This isn’t ideal, and makes manual focus take even longer.

While working with the manual focus is tedious, the Velvet 28 has a wide focus range. The lens is capable of 1:2 macro shots, so you can focus on objects that are as close as two inches from the lens, making it more versatile than the typical 28mm.

Without any electronic connection to the camera, not only is automatic exposure off the table, but you won’t have lens metadata saved into your files.

Manual focus may be a drag, but there’s nothing quite like the creative thrill of using a lens like this. Working with the Velvet 28 is simply a blast. The soft-focus effect is one more tool for in-camera creativity beyond aperture and shutter speed.

The maximum aperture starts at f/2.5, but a “+” icon on the lens allows users to turn past that for an extra 1/3 stop of light and even more of that glow effect. At the widest aperture, the entire image is soft and glowing, while at the narrowest, the Velvet 28 looks almost like a normal lens.

At the widest setting, the entire image looks as if covered by a fog. Colors bleed over edges, and objects appear to glow, especially white or overexposed areas of the image. Contrast begins to ease back in at f/2.8, though the center is still soft. At f/4 some sharpness starts to build in the center of the photo, while the edges maintain that ethereal glow. The sweet spot is around f/5.6, which makes for a decent amount of sharpness without erasing the glow effect completely. The image center still isn’t quite as sharp as a typical lens, but, admittedly, this could also be user-error with the manual focus.

By f/16 or f/22, that velvety glow is much less obvious across the entire image.

The white areas of the photo tend to grab the most of that glow when shooting wide open. At this setting, the color of white objects bleeds out over the edges, creating a halo effect. This can be intensified if intentionally over-exposing the image. That creates another way to use the Velvet creatively, by adding lights to create a halo.

Despite the wide angle, I still found myself filling the frame with my subjects to make those dreamy edges much more obvious. Otherwise, the glow towards the edges tends to blend with the blur of the background. The lens can still be used for things like landscapes, however, creating an intentional haze over the entire image or bringing a soft blur to the edges.

The Lensbaby Velvet 28 brings a dreamy glow to wide-angle shots. It’s a look that, when done right, can be great, but without the time and forethought, it just looks like an out-of-focus image. Fine art photographers will love it; pixel peepers, not so much.

The metal construction and smooth-turning focus and aperture rings give it a premium feel, while the macro focusing further expands the creative possibilities.

The lack of autofocus and autoexposure, mixed with the intentional softness, means shooting with this lens requires patience and some trial and error.

Lensbaby optics are unique — but in this case, Lensbaby is competing with itself. While the new lens is the widest in the Velvet series, the Trio 28 is a 3-in-1 lens that allows photographers to twist a dial to swap between the Swirl, Velvet, and Sweet effects. That means there’s already a 28mm option with the Velvet effect.

But, there are a few differences between the effect on the Trio and the Velvet. The Trio’s aperture is fixed at f/3.5, so the soft effect isn’t adjustable. The Trio also lacks the macro capabilities and is only made for mirrorless mounts, so you can’t put it on a DSLR. Some photographers may still overlook those missing features, though, since the Trio is a 3-in-1 lens that costs half as much as the Velvet 28.

Lensbaby also offers the Velvet in 85mm and 58mm versions, which will make it easier to fill the frame and exaggerate those soft edges.

Built well and without an autofocus motor, there’s no reason the Lensbaby Velvet 28 won’t last for many years. While other lenses get replaced with sharper versions as technology advances, this won’t apply to the Velvet 28. However, this doesn’t mean that you’ll continue to enjoy the effect long into the future — some photographers may grow tired of it over time.

Yes, if you like having in-camera control over creative effects. For photographers whose style meshes with the softness and glow of the Velvet 28, the lens could be a valuable creative tool. Don’t buy it if you depend on autofocus, autoexposure, or want the sharpest possible pictures.

Topics
GoPro takes to the skies with the Hero10 Black Bones
Nikon’s new 800mm lens for Z-mount cameras lightens the load
World’s smallest .56-micron pixel heralds the end of camera bumps
Can you spot Mount Everest in this dreamy photo taken from 250 miles up?
How to remove the background from an image
Instagram boss says to expect even more video content
6 awesome Earth images captured from the ISS in July
This GoPro Hero 10 bundle is $100 off at Best Buy today
The best iPhone tripods for 2022
Watch this Mavic 3 drone soar above the world’s highest mountain
How to watch DJI unveil an all-new drone today
DJI Avata vs. DJI FPV: Which first-person drone is best for you?
Astronaut reveals source of ‘intriguing’ bright light on Earth