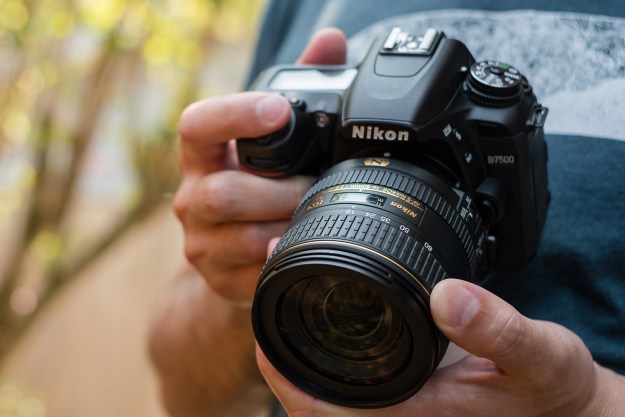 “This is the best kit lens a Nikon DX owner can buy.”

We don’t generally spend much time talking, or even thinking, about kit lenses. So named because they are often bundled with camera bodies at a discount, kit lenses are typically defined by lackluster image quality, slow apertures, and plastic (read: lots of plastic). In fact, in our camera reviews, we sometimes recommend buyers skip the kit and invest in better glass. Kit lenses like economy cars: good enough to get the job done, but they won’t do it in style. But as we’ll get into in our AF-S DX Nikkor 16-80mm f/2.8-4E ED VR lens review, Nikon’s high-end APS-C kit lens has changed the game — for a price.

The enormous and enigmatic name of this lens reveals much about its nature, but the key specifications are the focal length range of 16-80mm and the maximum aperture rating of f/2.8-4. That means at the wide-angle end (16mm), the lens achieves a maximum f/2.8 aperture — 2/3 of a stop faster than your standard kit lenses, which typically only open up to f/3.5. At the telephoto end of zoom (80mm), the maximum aperture decreases by a stop to f/4, but that is still one full stop faster than where most kit lenses end up, at f/5.6. The 16-80mm can “see” twice as much light as, say, an 18-55mm f/3.5-5.6, and it has more range on both the telephoto and wide-angle end, to boot.

That range gives the lens a field of view that is equivalent to a 24-120mm lens on a full-frame camera. Not coincidentally, Nikon also makes a 24-120mm f/4 full-frame lens, often bundled as a kit with its midrange FX (Nikon’s designation for full-frame) camera bodies. Being a DX (for cropped or APS-C) lens, the 16-80mm is considerably more compact, and we found it to be the perfect size paired with a D7500, which served as our test camera in this review.

The D5600 is a responsive camera that won’t give you a heart attack when your credit card bill arrives.

Of course, you can also find lenses with much more range if you’re willing to give up a stop in the aperture. However, for day-to-day use, we found that 16-80mm provided the perfect amount of versatility. From landscapes to portraits, this lens runs the gamut. The relatively fast aperture is paired with a claimed four stops of Vibration Reduction (VR, Nikon parlance for image stabilization), which means this lens is also decent indoors or in low light situations. You’ll still appreciate a camera with decent high ISO capabilities for shooting indoors, but this lens opens up new creative opportunities compared to other kit lenses.

The wider aperture also helps with autofocus performance, as the more light the AF sensor has to work with it, the faster it can be. AF was nearly perfect with this lens on a D7500, with fast and consistent results, even indoors.

The 16-80mm f/2.8-4 is the first DX-series lens to be treated with Nikon’s nano crystal coating, as evidenced by the gold “N” emblem. In theory, this means it should have less chromatic aberration (color fringing around fine edges) and have better sharpness and contrast overall. In practice, it is decently sharp throughout the zoom range and chromatic aberration does seem well controlled. It’s not perfect, and the lens definitely sharpens up with the aperture stopped down to f/5.6 or f/8, but it’s a strong performer, especially in the kit lens category. This won’t give professional glass a run for its money, but we weren’t really expecting it to.

There are two areas where this lens definitely drops the ball, however: vignetting and distortion. Both effects are quite pronounced, particularly at the wide (16mm) end. Here, barrel distortion is very noticeable, to the point where it can be quite distracting. Pincushion distortion at the telephoto (80mm) end is much less visible, but is still there. If you’re shooting portraits with this lens, keep your subject near the center of the frame if you’re shooting wide-angle to minimize distortion where it counts. At the telephoto end, things look good enough that we didn’t really worry about it.

A solid workhorse lens that produces good images in a variety of conditions.

Vignetting is strong throughout the zoom range, but it’s far less distracting than the distortion and can actually be subjectively pleasing, depending on your subject and personal taste. For portraits, we like it; but for landscapes, this could pose a problem.

However, the issues of distortion and vignetting are easily corrected digitally. Either in-camera or in postproduction with supported software like Adobe Lightroom, applying a lens correction profile (which is often on by default in-camera) will instantly correct the image. Technically, this does reduce the resolution, but the effect is minimal. With digital cameras, the fact that a lens distorts and vignettes is no longer such a big deal, but if you are looking to squeeze the maximum possible image quality out of your camera — and therefore don’t want to rely on digital correction — you may be disappointed.

Subjectively, we were actually quite pleased with this lens. At f/4 and 80mm, depth of field is shallow enough for portraiture and backgrounds are rendered with a very pleasing blur. It’s no substitute for an 85mm f/1.4, but for a do-everything lens, it’s rather impressive.

As we mentioned above, Nikon claims the VR in the 16-80mm is good for four stops of shake reduction. That should put it in league with the best VR Nikkors out there, but our experience was a bit underwhelming. We were able to hand-hold as low as 1/30 of second and pull of sharp images of a static subject, but by 1/15 of a second, motion blur was definitely a problem. We found this to be true at both 16mm and 80mm.

Now, no real photographer is going to hand-hold at 1/15 of a second and expect perfect results, but we have seen other lenses pull off this kind of astonishing performance, including the older DX Nikkor 16-85mm f/3.5-5.6 VR. So the VR on the 16-80mm f/2.8-4 is good, but not great. We would more modestly rate it at around one to two stops of shake reduction, depending on what shutter speed you normally consider appropriate for hand-holding.

The Nikon 16-80mm f/2.8-4 carries a one-year warranty out of the box, which extends to four years of coverage when registered.

This is one kit lens we certainly wouldn’t mind keeping in our Nikon camera bag. It may be a bit pricy to purchase on its own, but if you pick it up in a kit, we wager you’ll hang onto it even after you acquire higher-end glass. It’s simply one of the most versatile lenses available for DX-series Nikons, with a compact design, excellent zoom range, and decent light gathering ability.

While vignetting and distortion are pronounced, these issues are easily overcome thanks to digital correction. Given that this lens is more prosumer than true professional, its target user is likely fine with digital correction, so we can’t fault Nikon too much for relying on it. Beyond that, image quality is both objectively and subjectively good, and while we would have liked it to be a tad sharper wide-open, again, this isn’t professional glass so we won’t complain.

Our only real issue is that the VR did not behave as advertised, at least not with our lens. Results are still better with it on than off, but there was nothing here that impressed us with regard to stabilization.

For Nikon DX users, we’d argue that this is perhaps the best kit lens you can buy. That doesn’t mean it’s the best image quality or the most portable, but simply that it offers a very nice combination of features that fits the bill for the majority use cases.

Some users may be better off with the longer-range (and less expensive) 18-140mm f/3.5-5.6, but this comes down to personal preference and the needs of the individual photographer.

For a kit lens, the 16-80mm f/2.8-4 feels very well made. It could easily last through multiple camera body upgrades, and we appreciate that Nikon continues to offer a five-year extended warranty.

Yes. If you are in the market for a D7500 or D500, then we highly recommend picking up a kit with the 16-80mm f/2.8-4. Were it available in a kit with the D5600, we would recommend it there, too. Sadly, it is not. This is a solid workhorse lens that produces good images in a variety of conditions and is well worth the kit price.

For users who aren’t looking at upgrading their camera body, the decision is more difficult. At $1,070, the 16-80mm is still a decent value, but there are also a lot of other options out there that are going to be better at specific things. So, if what you need is a take-anywhere, do-anything lens, then you could certainly do worse. But if you’re looking for a lens that does one thing exceptionally well, then you should probably pass and put your money toward a fast prime or higher-end professional zoom.