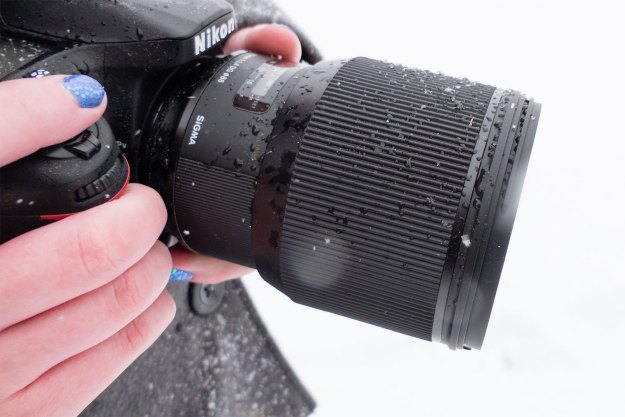 With “Art” right in the name, Sigma’s 85mm 1.4 DG HSM Art has a good deal of hype to live up to after only a few months on the market. Designed for professional level use, the 85mm boasts an incredibly wide f/1.4 aperture – and sits a few hundred dollars less than the big brand name lenses with similar specs.

But looking at a dizzying list of technical specifications doesn’t necessarily translate into great images, especially with lenses. This writer has always only ever owned Nikon’s Nikkor lenses – third-party lenses have always given pause. But after just two portrait sessions with the Sigma Art 85mm, we knew the precaution was misplaced – the lens has excellent performance and quality.

Available in mounts for Nikon, Canon, and Sigma cameras, the lens is made for full-frame cameras. It can also be used with crop sensor cameras that use those same three mounts, yielding about a 110mm equivalent focal length. We shot the Sigma 85mm Art on a Nikon D7200, which is a crop sensor camera.

As part of Sigma’s high-end lineup, the 85mm Art isn’t a slouch when it comes to build and durability. The lens’ body is largely constructed with metal – the area holding the focal length display window and manual-to-autofocus switch is one exception. The focus ring uses a rubber grip with ridges that’s easy to grasp.

The lens ships with a nice carrying case, lens hood, and lens cap – all three matching the high-end construction of the lens.

Compared to other 85mm lenses, the Sigma’s front element is quite large, necessitating an 86mm filter thread size. This size isn’t very common, which makes it a little tougher to find filters; it’s not impossible, especially at the higher end, but these filters will be relatively expensive. As expected for this level of lens, the front doesn’t rotate as the lens adjusts focus – a helpful feature when shooting with a polarizing filter.

The entire lens measures around five inches and tips the scales at nearly 2.5 pounds. While the 85mm Art is a prime lens, the size and weight make it feel like shooting a telephoto zoom — Nikon’s 70-200mm f/4 is half a pound lighter. To some degree, that’s simply what happens when you combine a large f/1.4 aperture with quality construction, but it’s worth noting that this lens is on the heavy side.

Switching between Nikon and Sigma lenses throughout two portrait sessions was seamless. One fear with third part lenses, even optically excellent ones, is that they won’t focus as quickly or accurately as first-party options. The 85mm Art didn’t miss a beat, with autofocus that was both fast and quiet.

With an f/1.4 aperture, the narrow depth of field leaves little room for focusing errors, but we were pleasantly surprised at how few images we had to throw out, even shooting wide open. The autofocus system worked very well with the D7200.

The 85mm Art offers a beautiful blend between sharp subjects and smooth bokeh. While that f/1.4 aperture produces a narrow enough depth of field to get the eyelashes sharp with the eyes a bit soft, we were impressed with the images the lens was able to capture, even using a wide open aperture. Although the lens doesn’t have a macro classification, it was sharp enough to zoom in and differentiate single snowflakes clinging to those eyelashes.

Chromatic aberration, or that green and purple fringing in high contrast scenes that often plagues wide-aperture lenses, was minimal. While we didn’t have the chance to use the lens in full sun during mid-winter, we tried to achieve a lens flare inside a dark room with a lamp and couldn’t get any flaring.

Since we were using the lens on a crop sensor, we can’t confidently say how the lens performs at the most extreme edges, where any softness is usually more pronounced. But within that 1.5X crop, there was no light fall-off or vignetting, and edges were still impressively sharp.

We were surprised to see a slightly warmer color balance in the images shot with the 85mm Art than similar shots from a Nikkor 50mm f/1.8 (settings weren’t changed between shots, including automatic white balance). Shooting a color card with a preset produced identical colors, but in auto white balance under the same cloudy sky, the 85mm Art tended to perform a bit warm.

During post-editing in Adobe Lightroom, the two Sigma lens actually had the more accurate white balance inside the snowy scene. We actually preferred the colors coming from the Sigma as well, although this was a matter of personal opinion.

The 85mm Art produced sharp, detailed images with soft bokeh and is a fantastic portrait lens. While it would be the most expensive lens in this writer’s kit, the image quality alone — with a wider aperture and less chromatic aberration — justifies the higher price when compared to other prime lenses. It’s also worth noting that the lens is actually less expensive than both Nikon’s 85mm f/1.4 and Canon’s 85mm f/1.2.

If you live in the U.S., the lens ships with a four-year warranty against manufacturer and workmanship defects only. Lenses must be purchased from a Sigma-authorized dealer and “anything beyond normal use” also voids the warranty.

The Sigma Art 85mm f/1.4 is capable of producing beautiful images. While the metal construction makes it taller and the 14-element design makes it longer, the lens is only a beast in terms of size and weight. If you can handle it, it performs beautifully, and doesn’t look too bad either.

While the closest Nikon and Canon variations take up less room in a camera bag, the Sigma offers excellent value without cutting corners on image quality. For portraits — and any other shots at 85mm — the Sigma delivers. While the price point may still be difficult to justify for enthusiasts, portrait professionals can save money over first-party options and would likely be very happy to include one in their kits.

While Sigma beats out both in price, its greater size and weight may bring some photographers pause. While that’s thanks in part to a metallic build, the Sigma is also almost two inches longer than both the Nikon and the Canon.

The Sigma is the clear winner for value, but loses out in portability.

Lenses have a much longer life cycle than cameras, and this Sigma looks to be no exception. Provided you treat the glass with care, the sturdy construction should offer an excellent life expectancy.

The best digital cameras
Fujifilm’s new nifty 50 f/1 lens can autofocus in near darkness
The DJI OM 4 is a smartphone gimbal with drone-like tracking
Sony’s A7S III is the ultimate 4K video camera, five years in the making
Netflix sheds light on its ‘approved cameras’ for filmmakers
Best Prime Day Drone Deals 2022: What to expect this week
How to remove the background from an image
Instagram boss says to expect even more video content
6 awesome Earth images captured from the ISS in July
This GoPro Hero 10 bundle is $100 off at Best Buy today
The best iPhone tripods for 2022
Watch this Mavic 3 drone soar above the world’s highest mountain
How to watch DJI unveil an all-new drone today