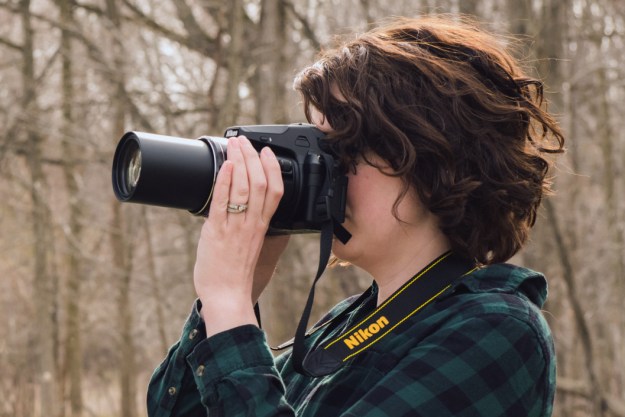 As point-and-shoot camera announcements grow scarce, the Nikon P950 sits in one remaining category that smartphones can’t touch: the super zoom. With an 83X, 24-2,000mm equivalent lens, the P950 can capture subjects you simply can’t see with the naked eye.

An update to the P900, the P950 adds 4K video and RAW photos, two new features that more advanced photographers will appreciate. Despite those updates, the P950 still does well in automated modes for less experienced shooters, and a new exposure compensation control on the lens barrel allows for basic brightness adjustments that anyone can use, even without understanding how exposure works.

Not everyone needs an 83x zoom, but for those who do, the P950 delivers an affordable, if imperfect, solution.

The Nikon P950’s body is unsurprisingly dominated by that 83x zoom lens. The lens is so big, you can feel the weight of the camera shift forward in your hands as it extends. At 35.5 ounces, the P950 has the weight of a DSLR (but with a much smaller lens). I still managed to carry the camera on a 5-mile hike without being terribly uncomfortable. Unlike a DSLR, I didn’t need to haul around multiple lenses to capture both wide-angle and telephoto shots.

The body style mimics a DSLR, which means the P950 has a large, comfortable grip, ample physical controls, and a hot shoe slot at the top. The control scheme is similar to the P900, with a mode dial and control wheel on the top right and a familiar slew of menu controls at the back.

While there’s plenty of space for controls, advanced photographers will have to do a bit more menu digging. ISO, a rather frequent adjustment in any of the manual modes, is not among the shortcut options.

The barrel of the lens is so large, it houses its own controls. A zoom toggle offers a second way to zoom in using your left hand, while a button pulls back the zoom so you can reframe the subject. New to the P950 is an exposure compensation wheel at the lens barrel. This was one of my favorite controls, resting right where my left hand supports the weight of the camera, and offering easy access to lighten or darken the photos.

The P950 also houses a 2.36-million-dot electronic viewfinder. A viewfinder is almost a necessity with this much zoom, since supporting the camera with your face keeps it much steadier than holding it at arm’s length to use LCD screen. That screen measures 3.2 inches diagonally, but a bit unusually for 2020, it isn’t a touchscreen. The resolution of both the viewfinder and the screen isn’t crazy high, but it’s sufficient and expected for the price.

The battery is rated for 290 shots, which was sufficient for hiking and bird watching. You’ll definitely want a spare if you plan to take the camera on any longer trips. The battery indicator also only has two notches — full and half. That’s annoying, since you don’t know if you have 135 shots left or just 5.

The ability to shoot a RAW photo is new to the P950. But, while there’s more ways for photographers with a bit of experience to control the shot, the camera’s built-in auto modes performed surprisingly well.

I spent a lot of time in the bird-watching mode. Combined with the exposure compensation dial on the side of the lens barrel, this mode would allow almost anyone to capture good photos of wildlife 90 percent of the time. I did occasionally need to switch into shutter-priority mode and control the settings so that the long zoom didn’t introduce blur, and it’s a bit annoying the camera didn’t know to do this automatically. But, the P950 could easily be an effective tool for the bird watcher that has almost zero photo know-how.

Despite the addition of RAW files, the P950 remains a camera that’s largely designed for casual photographers. The manual settings are limited. If you want to go faster than 1/2000 second or slower than 1 second, you have to set the lens to a certain position, the ISO at a certain setting, and can’t be in burst mode.

The camera did well for slow or still wildlife, but photographing animals in action was more of a crapshoot. Between the slow autofocus and just trying to keep the subject in frame (not easy at 2,000mm), more of my action shots were throw-aways than keepers.

The P950 can shoot at 7 fps, which is respectable for the class, but it can only handle ten shots at that speed before the buffer fills up. Worse, the camera’s controls are frozen while those images are writing to the card, so you can’t do things like adjust the zoom until the photos have finished processing. A full JPEG burst takes roughly eight seconds to process before being ready to shoot again, while RAW takes around 12 seconds. Despite the long zoom, this isn’t going to be the best camera for photographing your kid’s tee-ball game.

Using contrast-detection autofocus, the P950 focused on most slow or stationary subjects, but autofocus performance was a bit inconsistent at full zoom. The camera grabbed onto some subjects that I thought would be too difficult, while it occasionally had a hard time getting a sharp shot of something I thought would have been easier. It grabbed onto a bird through a mess of branches, which is impressive, but it also wouldn’t focus on a Sandhill Crane in a grassy field with the lens fully extended — perhaps because there was less contrast in the colors.

As a budget-friendly superzoom, the P950’s slower performance isn’t unexpected, but it can still be annoying.

The Nikon P950 sports a 16-megapixel, 1/2.3-inch sensor, the basic size for a point-and-shoot. That small sensor, however, is what makes the 83x zoom possible. And zoom power isn’t the only thing the lens has going for it. It also offers a bright f/2.8 aperture at the widest angle — which is excellent for a point-and-shoot with this much zoom.

The story changes as you zoom in. At the telephoto end, the aperture drops to f/6.5. Given that you’ll likely only ever use that much zoom outdoors under sunlight, this might not be too big of issue. A macro mode also makes the lens more versatile by capturing subject as close as 0.4 inches from the front of the lens in the wide-angle position.

Images come out of the camera with a surprising level of detail: enough to see the texture in animal’s fur and water droplets clinging to whiskers.

That detail is helped by a solid amount of sharpness in real-world tests. While the P950, of course, can’t compete on pure image quality with a mirrorless camera or DSLR, which use much larger sensors, those cameras don’t offer anything close to an 83X zoom.

Subjectively, the P950’s image quality won’t be the most pleasing. At full zoom, the out-of-focus areas look either like a blotchy mess or a painterly impression, depending on how you look at it. Instead of smooth bokeh, the background looks a bit more like gobs of oil paint.

Color is largely accurate from JPEGs straight from the camera, without being oversaturated, or, on the flip side, overly muted. Even the white balance didn’t seem to skew toward green, like most Nikon cameras have a tendency to do. Indoors, however, some images did take on a magenta hue. One of the benefits of being able to shoot RAW is that you can now fix the white balance after the fact, which wouldn’t have been possible on the P900.

Image stabilization also plays a role in the ability to capture detailed photos with such a long lens. With 5.5 stops of stabilization, I was able to use the 83x zoom handheld for most shots. Low light is still a problem, however. Shooting an hour before sunset, I had to max out the camera’s capabilities to get a sharp shot at full zoom, resulting in an image that was just too dark. If you don’t need to full extend of the zoom, you can get better results shooting at the wide end of the lens with its brighter aperture.

With the smaller sensor, the P950 struggles at high ISOs. Noise creeps in early, and photos are best at or under ISO 800, while ISO 1,600 and 3,200 are just okay. The maximum ISO 6,400 should be avoided. None of this is surprising for a point a shoot, but remember that just because the P950 looks like a DSLR doesn’t mean it performs like one.

As for video, the 4K resolution is an improvement over the P900. Even with all those extra pixels, however, video still isn’t terribly detailed, though the colors are consistent with quality from still photos. And if you want to shoot video at 2,000mm, make sure you bring a tripod. There’s just no way to hold the camera steady enough for a smooth video shot at such a long zoom.

The zoom on the Nikon P950 is basically telescopic, making the camera ideal for photographing subjects that are typically far away, like birds, wildlife, or the moon. Images are sharp, though the background at full zoom is muddled. RAW photos and 4K are nice upgrades from the P900, along with the new exposure compensation wheel on the side of the lens.

While there’s no arguing the benefits of such a long zoom lens, the P950 has some slow performance and autofocus that occasionally misses. And while adding RAW is a start, changing settings like ISO still requires digging into the menu. Low-light photos are impossible at full zoom, though the bright aperture salvages some usability at wide settings.

As one of the few types of point-and-shoot cameras offering perks smartphones can’t compete with, the super-zoom category offers many competitors. Outside of spending $1,000 on the 125x Nikon P1000, the P950 will get you the closest to your subject. The Panasonic FZ3000 offers faster performance and a brighter lens, but with only a 25x zoom. The Canon SX70 offers 20 megapixels, but the 65x zoom lens isn’t as bright at f/3.4 to 6.5. With its larger sensor, the Sony RX10 IV offers better image quality and faster performance with a 25x zoom — but at twice the price, isn’t really trying to compete with the likes of the P950.

Point-and-shoot cameras tend to have shorter lifespans before becoming outdated — and the 16-megapixel sensor may outdate the P950 faster. But, the camera just launched at the start of 2020, so it should offer a few years of use.

Buy the P950 if you absolutely need its incredible zoom. If you want to photograph action, keep looking. The P950 is decent, but it’s a niche camera for birdwatchers and wildlife enthusiasts, while sluggish performance and limited usefulness in low light prevent it from being a great do-it-all camera.

Topics
The DJI Osmo Action 3 looks nothing like the Action 2
GoPro Hero 11 Black leak suggests a moderate upgrade
Astronaut reveals source of ‘intriguing’ bright light on Earth
The best iPhone tripods for 2022
How to remove the background from an image
Instagram boss says to expect even more video content
6 awesome Earth images captured from the ISS in July
This GoPro Hero 10 bundle is $100 off at Best Buy today
Watch this Mavic 3 drone soar above the world’s highest mountain
How to watch DJI unveil an all-new drone today
DJI Avata vs. DJI FPV: Which first-person drone is best for you?
Astronaut’s video offers rare fish-eye view from the ISS
Apple responds to troubling iPhone 14 Pro camera issue