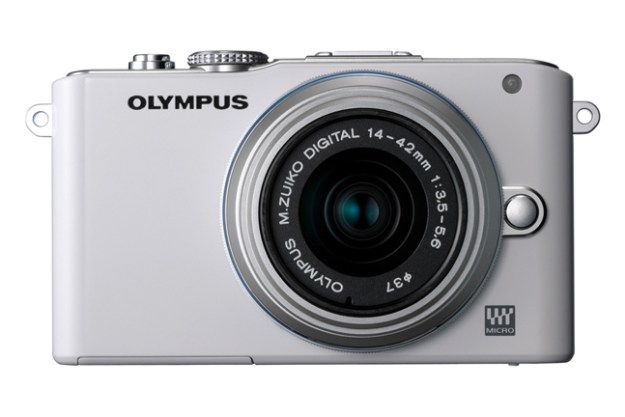 “If the decision is not if but which MFT camera you should get, there are a variety of reasons the E-PL3 should make the cut.”

Olympus has continued to expand its Micro Four Thirds (MFT) repertoire with new models for its PEN series. While the manufacturer might be finding itself in the news for, ahem, less than exemplary corporate behavior, its cameras measure up. The E-PL3 is no exception, which though deviating significantly from the design of the E-PL2, still manages to turn heads for its good looks and pack a couple of worthwhile technical upgrades.

It isn’t a perfect camera, and certainly some of its missteps can be found in tepid attempts to do too many things.

Like the rest of the Olympus PEN lineup, the E-PL3 is a handsome camera. It has a noticeably sleeker, slimmer body than its predecessors without too much clutter on the back-facing panel. In a somewhat befuddling movie, Olympus chose to deviate rather drastically from the vintage feel of the E-PL2 and outfit the E-PL3 with an appearance more similar to its XZ-1 and E-PM1 than the earlier PEN models. The absence of a faux-leather grip and streamlined, smoother body is what most of this can be attributed to.

It’s a new direction, but one we rather like: lens weight and shooting conditions mean we’re usually shooting with two hands when using a camera of this caliber, so the lack of a grip isn’t that big of a deal. The thumb grip on the back of the camera gives plenty of traction, but you don’t really want to try shooting one-handed. And in the unspoken race to produce the slimmest, most discreet ICL camera on the market, Olympus’ decision to thin down the E-PL3 makes sense.

However, here’s the problem with slimming down your ICL camera: The weight of the lens isn’t going anywhere. This means when you sit your camera down, it teeters forward and sits on its front-most edge.

It can also mean the backside panel is comparably more cluttered. Thankfully, we didn’t notice this much during testing. Once we referenced the E-PL2, however, it became obvious that some of the E-PL3’s buttons are somewhat unnaturally placed. The playback button isn’t on the right-hand side below the mode dial: It’s in the upper left-hand corner. Same with the trash button. Otherwise, you’re basically looking at the same physical setup, with the exception of a new power switch.

Olympus has returned to a power button that looks like a mini version of the shutter, which it changed up in the E-PL2 because it wanted to prevent accidentally turning your camera off. Luckily, it’s placed so close to the body’s surface that this was never an issue.

The most notable new feature is obviously the 3-inch tilting LCD display. Right off the bat, we didn’t have a lot of faith in this design choice. We’ve used an EVF or live feed on the screen display for the entire of the time we’ve used digital cameras, so what’s the need? However, the screen adapts well to its settings. When you have it secured against the camera, it’s big and bright, and in other situations, like shooting over your head, angling it out is also helpful. Also, it’s worth saying that if you’re going to choose between these sorts of complementary camera features, we’d take an adjustable screen over a touchscreen any day.

Another big different is the absence of a manual pop-up attached flash. Both the E-PM1 and the E-PL3 do without, instead opting for an attachable flash that can be used via the hot shoe on both cameras. Whereas this is a bigger sacrifice with the E-PM1 (which slides more toward the entry-level user than this model), it isn’t terribly inconvenient. Of course, if you forget the flash and find yourself on the go when it gets dark or you shoot in indoor settings, you’re probably out of luck. But given the skill level we’d peg most people who’d buy this camera at, it’s a safe bet that a detachable flash isn’t a significant obstacle.

As far as the E-PL3’s interior is concerned, the in-camera UI features the same makeover the E-P3 and E-PM1 received. There’s more explanation, and the overall menu looks a lot more user friendly and less technical. That isn’t to say actually putting some of the manual controls to work isn’t technical, but Olympus has at least tried to cut down on this appearance with its internal design choices. While there aren’t any new art filters in the E-PL3, there are expanded options (different variations of filters, the ability to include a pin-hole effect or frame, for example) and more pre-set scenes to choose from.

Shooting with the E-PL3 is as it should be: the camera offers high-quality images and videos in a package that is easier to operate than a DSLR — which is sort of your basic description of how a MFT camera should function. The E-PL3 fits the bill, but of course there’s more to it than that.

As far as “shallow” aspects of the camera go, the E-PL3 not only looks good but feels good too. It’s worth noting that it’s all-around smaller than the Nikon J1 and V1. We’re fans of feeling a little heft in our digital cameras, and Olympus managed to slim down this model (it’s the same size as the E-PM1) without making it feel like a toy.

Which of course, it isn’t — something its incredible AF system proves. The E-PL3 boasts a super fast, 35-point AF system, and earns claim to the title of world’s fastest AF system (it shares this distinction with the E-P3, a considerably more expensive camera). The speed bump up from the E-PL2 can be felt and is easily one of the E-PL3’s major selling points.

Generally, the camera is fast on all fronts, with the exception of powering it up. Now this is a remarkably small caveat, and one that might be more of a personal tick than anything else, but the E-PL3’s power switch seems to take longer than it should, leaving you waiting. We also took issue with the fact that pressing playback didn’t automatically turn the camera on.

We’d also like to issue a small warning about in-camera navigation. As these things go, it takes some getting used to. But it seems like we were fighting our instincts trying to accomplish relatively simple tasks like setting ISO and white balance. Again, it’s a small warning because you do learn and get the hang of things, it just doesn’t feel as natural as in some other systems.

The other major limitation of the E-PL3 is its adjustable — or semi-adjustable — LCD display. We were surprised by how often we utilized the screen’s tilt-out abilities: Shooting in certain positions and lighting was far easier. However, the screen doesn’t swing out to the side, which is worth noting.

But back to the E-PL3’s many positive characteristics. The inclusion of a dual-mode dials makes navigating the camera easier, in our opinion, than other MFT cameras. Really, it gives users a better chance to step up their manual shooting game instead of relying on presets and iAuto. This might mean there’s something of a learning curve, but it isn’t a very steep one.

The camera also improves on the line with a continuous shooting rate of 5.5 fps and improved low-light shooting. That isn’t to say you won’t need either a tripod or your flash in dark settings — its sensor size means it’s still not going to be able to push ISO levels like a DSLR can. However, we did find the results improved, and in many situations the camera’s manual customizations handled lighting and saturation just fine. The preset modes also produce decent to good results, although we never found them better than using manual settings.

Given that this is the mid-level option in the PEN series (the E-PM1 being the entry level, the E-P3 being its all-inclusive choice), it’s obviously not going to include everything the top of line model does—which translates to its more affordable price. For example there are fewer art filters, but as we mentioned, they now have expanded options to customize shooting a little more than last-gen PEN series models.

The E-PL3 includes a dedicated video record button, which might be somewhat awkwardly placed and could lead to unintentional recording. The camera shoots full HD video at 30fps with stereo sound, and can thank the much-heralded AF system for smooth, silent focusing when in record. Art filters can also be applied when shooting in video mode. The E-PL3 has solid movie recording skills, as the PEN series does, but some of the redesign behind this refresh is to allow for silent video recording, which is a significant upgrade. But this remains a camera devoted to stills, so we felt comfortable taking short video clips versus longer movie-making situations.

As it goes with MFT cameras, you’re going to get high quality stills — just not the highest quality. The 12.3-megapixel sensor admittedly offers impressive results, but it tends to boast hues on the warmer side versus the more natural saturation you get with a DSLR. A lot of this has to do with sensor size, and MFT cameras obviously don’t measure up to full frame cameras in this department. That said, it’s much bigger than that of any point-and-shoot, and why you get photo quality that sits somewhere in between. But just to be clear, in that in-between area, the E-PL3’s results definitely edge toward DSLR image quality rather than point-and-shoot.

Again, this also means you can’t push sensitivity as much as you can with a DSLR: The E-PL3 is advertised as being able to capture images at up to an ISO of 12,800, but it can go without saying that’s a fool’s game. Your images will be grainy and noisy at anything above 6,400. We are aware that these are standard sacrifices consumers generally know they are making when choosing between a DSLR and a MFT device, they just deserve repeating.

If the decision is not if but which MFT camera you should get, there are a variety of reasons the E-PL3 should make the cut. Its new, more compact form factor and moderately useful tilt screen are just two features that stand out. However the revolutionized and impressive AF system paired with the PEN series’ high image quality are the real draws here, both of which are why critics (including us) continue to be fans of the lineup.