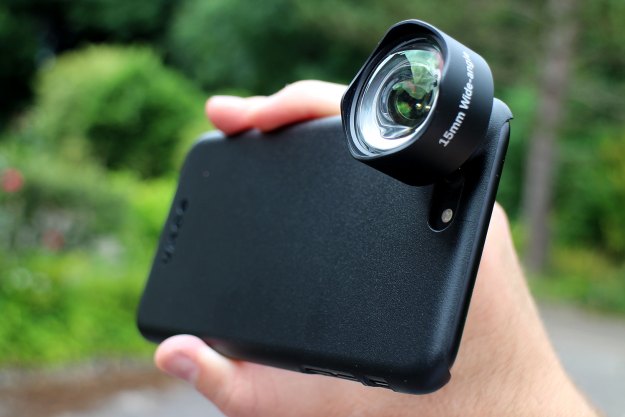 The iPhone 7 Plus’s camera is already very capable, so can adding a set of telephoto and wide-angle lenses make it even better? The Oowa Pro Lens Kit promises its special rotationally asymmetrical lenses will produce high quality images, and the two lens styles will add more versatility to the iPhone’s camera. In our Oowa Pro Lens Kit hands-on review, we find out if there’s any validity to the claim.

There are two lenses in Oowa’s Pro Kit. A 15mm, 110-degree wide-angle lens, and a 75mm telephoto for faraway objects, equal to a 2.5x zoom. The iPhone 7 Plus offers a 2.0x hybrid zoom on its own, but this cannot be used in conjunction with Oowa’s lens, which attaches over the regular lens on the dual-lens setup. Distortion rates are very low, with less than one percent on the wide-angle, and less than 1.5 percent on the telephoto.

We used the Oowa lenses and the special iPhone case to which they attach for a few weeks, and while the lenses impressed, the case was a disaster. Imagine the cheapest case you can get for your phone: The plastic that surrounds the volume and sleep/wake key broke within a few days, and after another couple of weeks, the top part of the case sheared, making it impossible to attach the lenses to it. It rendered the lenses unusable after less than a month’s worth of occasional use.

The iPhone 7 Plus needs a good case, and the Oowa Pro Lens Kit isn’t cheap at $150, so to use one of such poor quality is almost unforgivable. Even before the case broke, it was a fiddly affair getting the lenses attached, and when you don’t get them in the right place, the pictures you take are ruined because of light leaking in from the sides. It’s not very satisfactory. (Note: The Oowa Pro Lens Kit also comes in a version for the iPhone 6, 6 Plus, 6S , and 6S Plus.)

How about the photos it did take when the lenses fitted? The results were excellent. For once,  around the special lens design — an asymmetrical free-form lens for improved sharpness and vivid colors — proved to be real. At least, until the case broke.

It’s a fiddly affair getting the lenses attached.

The 15mm wide-angle lens is epic. It does a great job minimizing the distortion seen in the LG G6 and LG V20’s wide-angle lens, keeping lines straight and true even at the frame edge. It made pictures look more realistic and natural.

The 75mm telephoto lens also performed well, but had more problems than the wide-angle. For example, taking pictures of a plane passing overhead as it came into land introduced some annoying lens flare. Oowa does include a flare shield to help prevent this, and also addresses the situation in its FAQ.

Taking close-ups sometimes saw the iPhone focus rather awkwardly, leaving the foreground a little blurred. However, when it worked, the results were stunning. Close-ups look superb, with bright colors, plenty of pop, and a very strong bokeh effect. The 75mm’s extra zoom effect over the iPhone 7 Plus’ native 2.0x makes a difference, but arguably it won’t suddenly make a wealth of other pictures possible, unlike the Hasselblad True Zoom kit for the Motorola Z range.

Two lenses that increase the versatility of your iPhone’s camera, and take strong pictures, are only as good as the case to which they attach. For the Oowa Pro Kit, the case is more than just an Achilles’ heel — it’s a deal-breaker.

We contacted Oowa and have been informed improvements have been made to the case, with markings on both it and the lens to assist with lining them up for fitting, and some design alterations made to the case itself. We haven’t tried this case, so can only base our impressions on this version.

When the lenses are attached and lined up, the pictures captured by the Oowa lenses were excellent, especially from the wide-angle lens. However, we can’t recommend any product that doesn’t even last a month. Unless Oowa changes the design of its case, and overhauls the fitting of the lenses, don’t let the Oowa lens’ picture quality lure you into buying a set.

Oowa lenses started life on Kickstarter, and have also been on Indiegogo. They’re the work of lens experts DynaOptics, and can be purchased directly through the company’s website. A case and lens pack for the iPhone 6, iPhone 6S, iPhone 7, and iPhone 7 Plus is available at $150. Alternatively, each lens can be purchased individually for $100, and a case for $15.