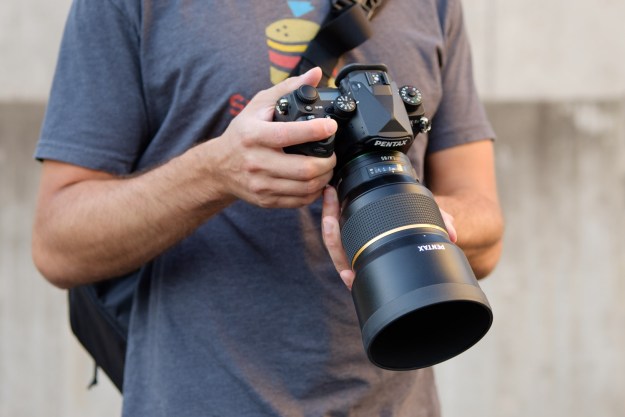 “Pentax fans have a winner. For everyone else, the Star Series 85mm is the best portrait lens you'll never get to use.”

If you’re a camera company that’s decided to double down on DSLRs despite the rising popularity of mirrorless, then you better at least have some lenses worth talking about. That’s exactly what Ricoh, which owns Pentax, has been doing with the slowly growing Star series, and the new HD Pentax-D FA Star Series 85mm f/1.4 SDM AW is a shining example of optical excellence. This full-frame portrait lens can quite comfortably hold its own against any other brand’s best 85mm. In fact, it’s a nearly perfect lens — and at $1,900, it absolutely should be.

There’s just one possible problem that will prevent most people from being able to enjoy it: It requires a Pentax camera.

The first thing you notice about the Sta Series 85mm f/1.4 is the world-devouring size of the front element. Gaze into it too long, and you may get lost. This lens is a behemoth at 2.77 pounds — heavier than the already uncomfortably large Sigma 85mm f/1.4 Art. Perhaps that’s why it’s called a Star lens — it has enough mass to generate its own gravitational field.

With the lens hood mounted, it looks like a much longer telephoto than a mere 85mm. Passersby who saw me testing it undoubtedly assumed I was out birding.

But if you can handle the heft, you’ll love how superlatively premium everything feels. The lens is fully weather-sealed, the materials are luxury grade, the focus ring is buttery smooth, and even the lens hood feels overengineered, with a rubber collar on the front and a grippy interior surface. The hood locks in with a very short-throw bayonet mount that’s faster to use than most other hoods, and unbelievably satisfying at that. If ASMR were a lens, it would be the Pentax Star-series 85mm.

With 12 elements in 10 groups, the optical formula isn’t actually that complex, at least in terms of pure numbers. Despite the extra weight, that’s two elements down compared to the aforementioned Sigma 85mm Art. But numbers aren’t everything, and Pentax has clearly made efficient use of the glass it has, including three extra-low-dispersion “Super ED” elements and a sole aspherical element.

Pentax also draws special attention to its new autofocus system. The SDM motor has 1.3 times more torque than the one found in the 50mm Star Series lens, and the focus group contains, in Pentax’s words, a “larger number of optical elements than ordinary lenses.” I’m not entirely sure what that means, but focus performance is certainly very fast.

The lens also employs an electronically controlled aperture diaphragm, which, intriguingly, Pentax says allows for smooth exposure adjustments while shooting video. Pretty much every modern lens uses an electronically controlled iris, by the way, which tends to be more accurate than the older, lever-driver style. Beyond smooth exposure changes in video, this is helpful for consistency in things like time-lapse photography.

The remaining specs include nine rounded aperture blades, a 33.5-inch minimum focus distance, and a 0.12X magnification ratio. Spec-sheet snoopers will notice those are all identical to the Sigma 85mm Art. It’s almost as if Ricoh had a bone to pick when they designed this lens (Sigma, which makes lenses for many different camera brands, stopped producing lenses in Pentax K mount last year). Surprisingly, given its extra weight, the Pentax uses “just” an 82mm filter compared to the Sigma’s 86mm.

Of course, comparing these two lenses is useless as anything other than an academic exercise. One is available exclusively for Pentax, the other for every DSLR except Pentax.

Aspherical elements and torque-heavy focus motors are great, but I know the only thing people really care about in an 85mm f/1.4 is the bokeh. You want to see backgrounds blurred to oblivion and point lights turned into large, soft, gently overlapping circles. I assure you, dear reader, the Star Series 85mm delivers all of this.

Wide open at f/1.4, your subject will be put to rest on a pillowy cloud of bokeh. The depth of field is so shallow that you can still achieve decent subject-background separation at relatively far subject distances. That’s great for full-body portraits or any shot where you want to draw attention to a relatively small subject in a large environment.

As expected, there is vignetting at f/1.4, but it’s quite mild. By f/2.8, it’s completely gone. Center sharpness is fantastic at any f-stop, although the edges do drop off a bit at wider apertures. I was impressed with how well it rendered a night sky at f/1.4, and while an 85mm wouldn’t be my first choice for astrophotography, this lens is sharp enough to handle it. It gets even sharper as you stop down through f/5.6, but in the real world, you should feel safe picking an aperture strictly for the depth of field you want without worrying about sharpness.

Chromatic aberration is particularly well-controlled. I noticed some color fringing in defocused areas, as is common on any lens, but only extremely minor fringing within the focus plane, and only at wide apertures.

Oh, and distortion just doesn’t exist. At all.

I really have to get pedantic to find a fault with this lens, but here you go: While perfectly round by f/2 at f/1.4, the blur circles not in the center of the frame stretch into oblongs. As you stop down past f/2.8, you can start to see the angular shape of the iris blades in the blur circles. “Onion rings” also showed up in my test shots of LED string lights. All of this is terrible, I know.

In all seriousness, the Pentax 85mm f/1.4 is a gorgeous lens, and scrutinizing its minor imperfections is nothing but a waste of your time. If you are of the Pentax persuasion — and can scrounge up two grand — just get out and shoot, focus on your art, and trust this lens to keep delivering gold.

Products like this are what make being a reviewer great because I get to try something novel that I genuinely enjoy, but that I would never actually buy for myself. I mean, did you think I was going to switch to Pentax?

I tested the lens on a Pentax K1 Mark II, a full-frame DSLR using an older, but still excellent, 36-megapixel sensor. It didn’t leave me wanting for image quality — although I do think this lens is aiming for even higher resolutions — but it’s still not a good enough camera for this lens. The 33-point viewfinder autofocus system lacks the flexibility and accuracy to really put it to use. You’re basically locked into single-point AF and the “focus and reframe” method of shooting, which is not the easiest way to get sharp results with an f/1.4 aperture. Throughout this review, as impressed as I was, I couldn’t help but imagine how much better the lens would be with Sony’s Real-Time Eye AF or Canon’s impeccable subject tracking in the EOS R5.

The K1 Mark II was never my favorite DSLR, but most of its shortcomings are simply those of the format. DSLRs just can’t offer the advanced focus features we’ve come to take for granted in mirrorless cameras. A couple of exceptional lenses might have been enough to bring people back to Pentax — if they didn’t have to first bring people back to the DSLR.

But the optimist would say this lens is forward-looking. If Pentax can make such a great lens, then maybe it will soon have an equally great DSLR to follow. I do think there is some room left to innovate in DSLRs, but they’ve been drifting away from the mainstream for years. Perhaps Pentax can be the one to rule over this new niche kingdom?

Ricoh, after all, is apparently fine working in the margins. Its GR III is a lovely little camera built for a select few street photographers, and this Pentax lens targets a similarly small group of customers. The brand may never be a high-volume competitor, but that doesn’t mean the Star Series 85mm is any less a triumph for those who can use it (and afford it). Whatever your reasons for holding onto your Pentax DSLR, you just got another big one.

Like the quiet, introverted kid in the back of the class who aces the test but doesn’t say a word, Pentax continues to put out some stunning lenses with hardly any fanfare. Even the CameraVille, who may as well be the lone Pentax-focused YouTuber, doesn’t have a hands-on video at the time of publication. Compared to  influencer-obsessed Sony and Canon, that’s … kind of nice.

Of course, a lack of fanfare may simply signal a lack of fans. But for all the confusing decisions Pentax has made with cameras (remember the Q?), I can still admire it for making lenses like this. The Pentax-D FA Star Series 85mm f/1.4 is as good as it gets — even if most people will never have a chance to give it a shot.

So savor this moment, Pentax shooters. You finally have your time to gloat.

No. Pentax photographers’ third-party options are slim these days. In many ways, this lens feels like a response to the lack of alternatives. But it isn’t just a great option because it’s the only option. Vacuum or not, this is a brilliant portrait lens.

Any professional-caliber lens will easily outlive the life of your camera, and this one is no different. I just hope it doesn’t outlive the Pentax brand.

If you’re ready to reaffirm your commitment to Pentax — and to DSLRs — then yes. It may be gargantuan and expensive, but the Star Series 85mm is a thank-you gift for the Pentax faithful who have stuck it out this long. Enjoy it; you’ve earned it.

Topics
Canon EOS-1D X Mark III brings stunning stills and RAW video to an impressive DSLR
The Nikon D780 is finally here, with 4K video and insane battery life
Canon’s new mirrorless lenses come with impressive specs — and high costs
Leica’s new 50mm lens will set you back $4,500, because Leica
How to remove the background from an image
Instagram boss says to expect even more video content
6 awesome Earth images captured from the ISS in July
This GoPro Hero 10 bundle is $100 off at Best Buy today
The best iPhone tripods for 2022
Watch this Mavic 3 drone soar above the world’s highest mountain
How to watch DJI unveil an all-new drone today
DJI Avata vs. DJI FPV: Which first-person drone is best for you?
Astronaut reveals source of ‘intriguing’ bright light on Earth