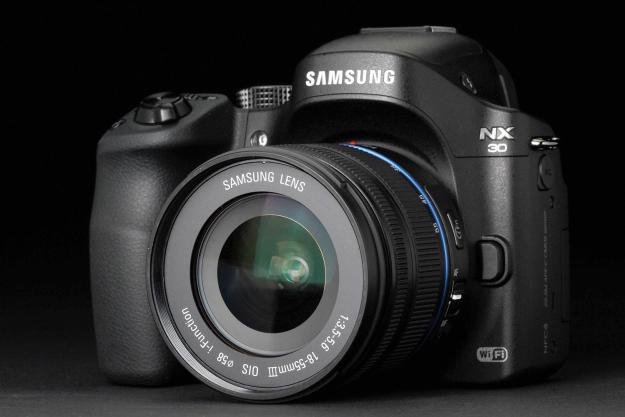 “If you’re looking for an alternative to an enthusiast DSLR, the Samsung NX30 Compact System Camera will do the trick.”

The new Wi-Fi-enabled 20.3-megapixel Samsung NX30 ($999, with 18-55mm OIS i-Function lens) is not just your ordinary Compact System Camera (CSC). Targeting the enthusiast photographer, it has more DSLR-like features and qualities than smaller, lighter CSCs, and it’s more expensive. But, does it have the chops to attract advanced users with their eyes on enthusiast DSLRs? Yes, it does.

The NX30 is the more expensive big brother to the Samsung NX300, a mirrorless camera we really liked. That one had simpler lines than the NX30, which looks much more akin to a DSLR in body style. But, since there’s no mirror-box assembly, the NX30 is much more compact and lighter than a Canon EOS Rebel T5i or Nikon D7100. The camera measures 5 x 3.76 x 1.64 inches and weighs 13 ounces (without a lens); the $799 Canon EOS Rebel SL1 is probably the closest-sized DSLR, but it weighs more and doesn’t pack the performance (burst mode and movie quality) of the NX30.

Like a DSLR, the NX30 has a built-in viewfinder (electronic variant), a pop-up flash, and two physical dials on the top deck – three critical items you won’t find on the $799 NX300 and many CSCs. Some reviewers have complained the dials feel plasticky but this was a non-issue for us. They’re not the metal knurled dials of the Nikon Df but the camera isn’t $3K either. In fact, we were happy to have physical dials to quickly change shooting and burst modes, rather than delving into onscreen menus, as you would with the NX300.

The key feature on the front is Samsung’s NX-mount. Currently there are about 20 options from the company, hitting most of the key focal lengths. Third-party suppliers Samyang, Rokinon, and Bower also make NX-mount glass. The kit lens is an 18-55mm (3x) zoom, which is a typical focal length for kit lenses, but this is an i-Function lens with built-in optical image stabilization (more on this in the Performance section). Also on the front is an AF Assist lamp and depth-of-field preview button.

On the top deck are stereo mics for recording 1080/60p Full HD videos. We were quite pleased to see them, as many of our recently reviewed cameras were mono only. The camera also has a mic input for improved sound capture. There’s a Direct Link button that lets you choose the Wi-Fi option you prefer. Although this CSC is targeted toward enthusiasts it doesn’t have an LCD-readout to quickly glance at your settings, as most high-end DSLRs would. It’s not a deal-breaker but that’s one of the trade-offs for the smaller CSC size versus a heftier, enthusiast DSLR.

Samsung leads the way in marrying smartphones and cameras. Its Wi-Fi system is simple to use.

The back has two very important features: a tiltable electronic viewfinder (EVF) and a 3-inch vari-angle touchscreen AMOLED display. Between the pair, you can hold the camera at practically any angle you can imagine in order to get the shot you want. The EVF operates via an eye control sensor and is rated 2,359K dots. Pull it out and there’s a diopter control on the side. Once extended, you can tilt it up 80 degrees. It’s a very good display and came in quite handy in the bright Arizona sunshine of this reviewer’s test bed. The swivel touchscreen is also good and it’s rated 1,037K dots. Colors are quite vivid but there are definite reflectivity issues. Just adjust the brightness to the highest level if you’re planning to be outdoors. If things get too bad, the EVF is a live saver.

On the right side a small door covering HDMI and USB connections, while the left side has the mic input, a tiny speaker, and the NFC tag (for quick pairing with compatible devices, mainly smartphones). The bottom compartment holds the battery and SD card (UHS-1 compatible). The battery is rated 360 shots, which is pretty standard for a CSC but it’s much less than the juice in larger DSLRs.

Besides the camera and the kit lens, you also get an AC adapter/USB cable for charging the battery in-camera. There are straps and caps, a very basic 40-page Quick Start Guide, a foldout Quick Reference Guide, and two CDs. One has Samsung software and the full instruction manual, while the second has Adobe Lightroom Version 5.0, a sweet little bonus since the program costs $149 new.

The full manual starts off with a very nicely done basic guide to photography. No matter how experienced, it’s always good to review the basics. The overall manual is one of the best we’ve checked out in a long time – it’s very clear, concise, and well-illustrated.

After charging the battery and loading a 64GB SanDisk Extreme Pro SDXC card, it was time to put the NX30 through the mill – a variety of Arizona locales ranging from lakes to mountain gorges, with some people and glass sculptures thrown in for good measure. The camera was set to maximum photo and video resolution (5472 x 3648 pixels, 1080/60p MOV). The NX30 shoots JPEG and RAW files and, if you purchase an optional lens, you can capture MPO 3D images; we only had the kit lens for our review.

The NX30 uses the same 20.3-megapixel APS-C imager as the NX300. Photos taken with the NX300 were excellent , so it’s no surprise they were fine here as well (see samples). The supplied 18-55mm glass is a step above the ordinary since it offers the very cool i-Function feature. When you move out of Auto, just press the button on the side of the lens and you access an attractive interactive graphic user interface (GUI) that lets you adjust (by turning the jog wheel) aperture, shutter speed, ISO, exposure compensation, white balance, and digital zoom (what you can adjust will depend on the shooting mode you’re in). No need to take the camera away from your eye to do so. We liked i-Function when it first arrived and it’s still a nice feature that separates Samsung CSCs from the competition. Even with the i-Function, the lens is somewhat limited with its f/3.5-5.6 aperture range. If you really like shooting in low light, a wide aperture prime lens should be on your shopping list in the future.

The main mode dial offers the following shooting options: Smart Auto, PASM, two custom options, Smart (i.e., Scene, with 16 choices), Wi-Fi, and “i” for Lens Priority. With the last option you can adjust background blur, contrast, and the digital zoom using the i-Function controls and jog dial. The nearby shooting mode dial lets you quickly change from single to burst shooting, plus there are self-timer and bracketing settings (exposure, white balance, and so on). As we noted before, it’s nice having these physical dials and we really didn’t miss the top-deck LCD that shows camera settings.

Like most high-end CSCs, the NX30 offers Hybrid AF, a combination of phase detect (105 points) and contrast detect (247 points) focusing. The system is very good and we had no issues with grabbing or hunting to lock in focus. The NX30 features an improved version over older models, dubbed AF System II, which the company claims is faster. We’ll take their word for it since the camera is very responsive. And if you want to focus on a specific point in the frame, you can do it simply by tapping the screen, directly on the subject.

Unlike most other CSCs and sub-$1,000 DSLRs, the NX30 has a top shutter speed of 1/8000th of a second with a maximum burst setting of 9 fps. The 24.1MP Nikon D7100, one of our favorite enthusiast DSLRs, also offers 1/8000 but the top burst setting is 6 fps. Physically, the Nikon is a very different animal, but we want to demonstrate how this smaller CSC can mix it up with the big boys. Realize, however, the NX30 handles the faster speed for shorter bursts than the D7100, which is expected from a high-end enthusiast DSLR since it’s much larger and heavier. We shot around 25 JPEGs at top speed before the NX30 slowed down. This should be good for most photographers but there is a definite difference between the two types of cameras.

As we alluded earlier, the NX30 takes excellent stills and high-quality videos. Colors have a nice pop, response is quite good, and the 9 fps burst is a real standout. If you’re into video, the NX30 is a solid performer with little of the rolling shutter you’ll find in many DSLRs. We shot 60p scenes of fast-moving jet skiers, landscape panoramas, and even a rocking train moving through a tunnel. The results were very good, as the focus kept up with speedy subjects. Colors weren’t quite as crisp as the stills but that’s typical of almost all DSLR/CSC movie clips. Exposure response was quick and accurate, plus the stereo sound adds a nice ambience to your efforts.

Samsung leads the way in marrying smartphones and cameras. Its system was easy to use before and it’s just as simple now, especially with the touchscreen monitor. Once you download the Samsung Smart Camera app, you can transfer images back and forth to your smartphone. We set it up for the camera to upload images to our Droid 4 and within a few taps, it was good to go. If you enable AutoShare, all of your shots go to your phone automatically. Your phone can also control your camera remotely via said app. Download the separate Samsung Home Monitor app and the camera acts as a baby monitor or a way to keep tabs on your house. The camera is also NFC-enabled; although our smartphone doesn’t have that technology, we have successfully tested Samsung’s NFC feature with other smartphones.

The NX30 has an ISO range of 100-25,600, typical for high-end cameras in 2014. We recently reviewed the Nikon Df, which held up at ISO 51,200 and was the best of its type. The NX30 isn’t in the same league but neither does it cost nor weigh as much. Here, ISO is solid to 800 with a slight falloff at 1,600. At ISO 3,200 digital noise is very evident and gets much worse as you move to 25,600. We recommend users not go there, but the lower ranges are acceptable – another reason for picking up a wide aperture prime lens.

Like the NX300, we can enthusiastically recommend the NX30 – it’s a high-quality CSC that delivers fine results.  No question, it’s a bit on the expensive side but one mitigating factor is the inclusion of a full copy of Lightroom 5.0 editing software and a good starter kit lens. Still, it’s a grand – hardly chump change. Yet, if you’re looking for an alternative to an enthusiast DSLR, the NX30 will do the trick. Just make sure the lens selection works for you since it’s hard to top the glass libraries of Canon and Nikon.

Best GoPro alternative action camera deals for October 2022
Best microSD cards for 2022: top picks for your camera, tablet, or drone
Apple responds to troubling iPhone 14 Pro camera issue
The best webcams for 2022
Vloggers, Nikon has built a new camera just for you
Best 4th of July sales still available — save on TVs, Apple and more
Netflix sheds light on its ‘approved cameras’ for filmmakers
Best Prime Day Drone Deals 2022: What to expect this week
How to remove the background from an image
Instagram boss says to expect even more video content
6 awesome Earth images captured from the ISS in July
This GoPro Hero 10 bundle is $100 off at Best Buy today
The best iPhone tripods for 2022