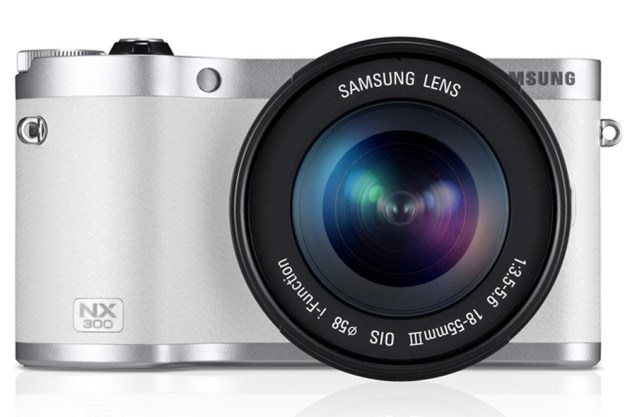 “The Samsung NX300 is a great next-step camera for someone who wants high-quality stills and solid videos from an interchangeable lens camera with a large sensor.”

We have to admit to salivating over this camera when Samsung unveiled their NX300 ($749-799) at the Consumer Electronics Show (CES) this past January. Alas it was a prototype so we had to cool our heels, waiting for a production unit. Well, it finally arrived and was worth the wait. In fact, its Wi-Fi implementation is way ahead of the competition, but before we salivate some more, let’s get into the details of this 20.3-megapixel compact system camera (CSC).

The retro craze continues in camera design as our two-tone silver and black edition looks right out of the mid-20th century. Needless to say if you showed this to the Mad Men crowd back in the day, they’d have flipped. Since this is a mirrorless CSC, the body is very thin and compact. It measures 4.8 x 2.5 x 1.6 inches and weighs 9.9 ounces (without lens). It has a nice textured finish, making for a secure grip. The camera is very clean looking with a minimal array of buttons and labels.

As with any interchangeable lens camera, the key feature on the front is the mount. Samsung uses their NX mount and there are almost a dozen lens options available, covering the key bases. We were given an 18-55mm f/3.5-5.6 OIS zoom as well as the new 45mm f/1.8 2D/3D lens ($500) to try out. The other key feature here is the AF Assist lamp.

The top deck has a hot shoe to connect the supplied external flash, a Direct Link button, jog wheel, on/off shutter combo, and mode dial. The Direct Link button lets you designate a specific Wi-Fi function (we chose AllShare; more on this in a bit). The mode dial has Smart Auto, PASM, iFunction, Smart (which gives access to scene modes and filters), and Wi-Fi. Within the Wi-Fi mode you’re given six options: Mobile Link, Remote Viewfinder, Auto Backup, e-mail, SMS&Cloud, and AllShare Play. We chose AllShare because it automatically sends images taken with the NX300 to your smartphone – from there you can do whatever you’d like such as texting a photo. Downloading the Samsung Smart Camera app from Google Play to a Motorola Droid 4 and linking the NX300 was as easy as can be. Take a shot and voila, it pops up on your smartphone. Now, this function has been done before by Samsung and others but in this case it’s really fast, thanks to the responsive touchscreen and a new high-speed Dual Channel Wi-Fi radio in the camera. As DT readers know, we haven’t been very impressed with Wi-Fi enabled cameras in most instances but this one made believers out of us.

The back of the NX300 is dominated by the tilting 15:9 aspect ratio 3.3-inch AMOLED touchscreen (rated 768K dots). The quality is excellent and it responds nicely to finger taps. You can angle it up 90 degrees, down 45 for taking shots overhead, and at waist level. We wish it had an electronic viewfinder (EVF) – even if it was an option – for those shooting situations when having one would come in handy, but on most occasions we really didn’t miss it.

To the right of the screen are the buttons that are so familiar – exposure compensation, menu, playback, and delete. The four points of the controller give access to autofocus (AF), ISO, burst mode, and display. A “red dot” movie button on the top right rounds out the back buttons.

On the right side is a compartment with USB and mini-HDMI connections, while the bottom compartment holds the battery and SD card.

All in all, a very clean, nicely-featured camera – other than the lack of an EVF.

Samsung is giving every buyer a nice Christmas present since the camera comes with Adobe Photoshop Lightroom (version 4), one of the better photo editing software packages available. This costs $119 as a standalone purchase so you’re really getting a nice bonus. The least expensive NX300 kit includes the camera and a 20-50mm iFunction lens ($749). It also comes with an iFunction 18-55mm OIS glass in another bundle ($799); this was the outfit we tested. Also in the carton is the battery that charges in-camera via the AC adapter, an external flash that mounts on the hot shoe, and a strap. Along with Lightroom, a separate disk has i-Launcher and PC Auto Backup software and the full user manual. There are also Quick Start and Quick Reference guides to get you up and running with little fuss.

As noted earlier, we waited a long time for a production model. We won’t keep you in any sort of suspense about the NX300 – it’s a top notch CSC you should place high on your shopping list. The camera takes high-quality stills and videos, plus the excellent Wi-Fi implementation is tasty icing on a yummy cake.

The NX300 has a 20.3-megapixel APS-C sized sensor, putting it on a level with many DSLRs and CSCs – and miles ahead of almost any point-and-shoot. Samsung upgraded the AF system by combining 247 contrast detect AF points and 105 phase detect points. This hybrid is showing up in more cameras in 2013 and that’s a good thing. It helps speed up focusing overall so there’s little grabbing, even in low-contrast scenes, an issue with many CSCs. During our testing period, we never had to search for a “hard line” in order to lock focus. Overall the camera is quite responsive with 9 frames-per-second burst shooting, a tad quicker than last year’s NX210. Nice work, Samsung.

The NX300’s tilting AMOLED screen came in very handy, allowing us to shoot at a variety of angles.

We used the NX300 is a variety of locales and lighting conditions. When done we did our usual pixel peeping on a 27-inch monitor and reviewed the movies on a big-screen HDTV. What we saw onscreen was really fine. Stills had a great pop even in the default setting. Colors were spot-on, especially of a newly blooming cherry tree. Standing under the tree, we pressed the video keys and the results were also on the money (top resolution is 1080p/30 fps). There was some rolling shutter as we panned and zoomed but it wasn’t too annoying, unlike the Pentax K-30 .

The camera has an ISO range of 100-25,600, which sounds good on paper. Our test had the NX300 holding onto detail and color until about ISO 6,400 and rapidly falling off after that point. Still, this is pretty incredible for a sub-$1,000 camera. Our tests also showed that the built-in optical image stabilization (what the OIS stands for) in the 18-55mm lens did a very good job cutting down on shaky images, even using a basic two-handed grip.

One area that was a bit of a disappointment was the waterfall setting. Here you definitely needed a tripod for the long shutter speed. We had much better luck using shutter priority capturing a local waterfall.

The NX300’s tilting AMOLED screen came in very handy, allowing us to shoot at a variety of angles. The screen itself is very responsive to touch and – even in direct sunlight – there were few problems reading and interacting with the display. Also, Samsung gets good marks for a nicely designed menu system that helps you make the most of camera’s capabilities.

As you can tell we were quite happy using the camera. The Wi-Fi was a nice plus as we easily downloaded the Samsung app to our Droid 4. Using AllShare, the camera uploaded images to the photo gallery on the phone so we could share them with a few taps. We also easily set it so images were sent to our Facebook albums and they arrived in their own NX300 album. This was done nicely in the background and it wasn’t until we received a few “likes,” that we knew they were there.

What is a bit of disappointment is the new 3D lens that costs $499 or $999 bundled with the camera body. This is simply too much for what is basically a gimmick. Now, if you’re one of the few people across the globe into 3D stills, it may be a worthwhile investment but connecting the camera via micro HDMI to an active shutter 3D HDTV to review the results of this f/1.8 45mm lens wasn’t worth the bother. The effects were OK on the 55-inch screen but nothing to jump up and down about. Actually we preferred using it as a 67.5mm prime in 2D by flicking the switch on the side of the iFunction lens.

We have no reservations recommending this camera – especially for people without a collection of lenses from another brand. This would be a great next-step camera for someone who wants high-quality stills and solid videos from an interchangeable lens camera with a large sensor. A state-of-the-art Wi-Fi implementation makes it that more attractive. Given all of this, the Samsung NX300 is a hands-down Digital Trends Editor’s Choice.

Topics
Best GoPro alternative action camera deals for October 2022
Best microSD cards for 2022: top picks for your camera, tablet, or drone
Apple responds to troubling iPhone 14 Pro camera issue
The best webcams for 2022
Vloggers, Nikon has built a new camera just for you
Best 4th of July sales still available — save on TVs, Apple and more
Netflix sheds light on its ‘approved cameras’ for filmmakers
Best Prime Day Drone Deals 2022: What to expect this week
How to remove the background from an image
Instagram boss says to expect even more video content
6 awesome Earth images captured from the ISS in July
This GoPro Hero 10 bundle is $100 off at Best Buy today
The best iPhone tripods for 2022