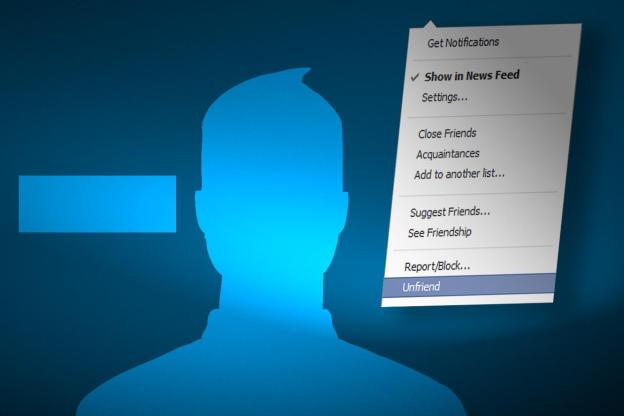 You log into Facebook, hoping to virtually kick it with your homies from various places. You check out your News Feed to see what’s going on in the lives of people that are closest to you. Instead of friendly faces, however, you discover that your feed is filled with strangers you don’t recall ever adding. You start to hover over their faces to uncheck “Show in News Feed,” in an effort to save your remaining Internet sanity … until you realize it’s been more than an hour and you’ve effectively shunned 100 Facebook contacts into social network oblivion. Facebook lists can help assuage the pain of maintaining more than a thousand online friendships, but sometimes the only option left for you is the ominous Unfriend button.

A study conducted by the University of Edinburgh Business School has discovered that having more Facebook friends can cause higher levels of stress because you tend to spend a lot of time maintaining a semblance of a life far more perfect than your reality, masking any habits that onlookers may deem inappropriate. Another recent survey found that there are many, many reasons why we’re tempted to hit unfriend. Hey, there’s no reason for you to pretend to be something you’re not, just like there’s no reason to feel like a total jerk for wanting to unfriend a “friend” – we’ve all been there, and it’s perfectly understandable why you want to purge yourself of your non-friend friends.

With that said, unfriending on Facebook entails a certain level of scrutiny and finesse. It’s been found to produce life-altering results, and the digital act can bring with it some real-world conflict, if said unfriended person realizes what you’ve done.

Although dramatics are sometimes inevitable, you don’t have to go through all that drama needlessly. For anybody who takes their social networking life seriously, ending a Facebook friendship is almost comparable to having to face impending doom – for you to come to terms with your decision, you have to go through the five stages of grief unfriending first.

This stage is the easiest one to spot – it’s when you subconsciously make excuses why you should keep the Facebook contacts that annoy the bejesus out of you. Maybe someone is publishing a book of selfies. Maybe you think you’re emotionally healthy enough to see constant photos of your ex’s wedding and/or new baby. And hey, grade school friends are forever, right? If you’re thinking any of these things, you are entering the denial stage where you’re engaging in internal monologues that are just plain crazy and wrong.

“I’ve known him since second grade.”

“His mom’s so nice though.”

This stage is marked by irrational madness over some slight on the social network. You’ve denied yourself deleting them, but now you’re getting even more aggravated with them than ever. Whether it’s because they are untagging themselves from content you’ve personally curated for them (“It’s like she’s ashamed of having my link show up on her wall!”) or failing to post a generic birthday greeting on your Timeline on your special day,  you are pissed and you are not having it. And if someone starts writing lovey messages to their significant other that you have to see? Ooooh no. You kept them around, and this is the crap you get!?

“How dare he untag himself in my photos!”

“Uuuuugh I don’t care about your stupid Pinterest pins.”

This is the stage you hit once you’re strongly considering unfriending someone and going through the social consequences that may come up if you choose to do so – or, if you did have the guts to get rid of someone and you’re considering going back for round two. Maybe they’ve changed! Maybe you’ve changed! Maybe you guys will make it this time! You know you’re in the Bargaining phase when you find yourself staring at the “add” or “defriend” buttons for a long time, hovering your cursor over them, debating internally for way longer than is normal or OK.

“I deleted her a year ago, but maybe we should reconnect!”

“Sure, we just broke up, but if we’re going to be real life friends, we should stay Facebook friends!”

“If I unfriend him, it’ll be so awkward at those once-a-year group get-togethers.”

You’ve done all the bargaining you can, and you know that things are starting to wind down to the inevitable … and you’re probably about to hit unfriend. You start thinking about all the good times: The pokes, the “happy birthday!” posts, the game of Wall-tag you played. Maybe it’s an ex from a year back that you still can help but Facebook creep on, or your best friend from college or high school who moved across the country. I mean, you guys haven’t spoken in three years and she’s turned out to have a penchant for posting political tirades, but you haven’t been able to pull the plug. Or maybe the dude you’ve been crushing on for years has just posted one too many statuses about his bro-hood and it’s just bumming you out. Thus, you sink into a depression, knowing what’s to come.

“It’s just going to make me so sad seeing all these photos from when we were dating but not being Facebook friends.”

“I remember the day she said, ‘We totally have to be Facebook friends!'”

“I just really thought someday he would change.”

If you’ve reached this point, congratulations for snapping out of your social media stupor! This is the best stage of all – when you ask yourself one question (“Will life be incredibly intolerable if I sever ties with this person?”) and the answer is majorly obvious: Not even a little bit. You’re about to liberate yourself from the bondage of the overfriended-Facebook situation. Cut that fat, I say!

“I’m not even sure I met her more than once.”

“Hmmm, I think we only became Facebook friends in the first place to swap Chem notes.”

“Oh what!? He’s not even dating my cousin anymore? Sayonara!

If you’re able to go through the process en masse, then the people in your News Feed will inevitably matter.

Beyond rainbows: 5 tech companies that did more for Pride in 2022