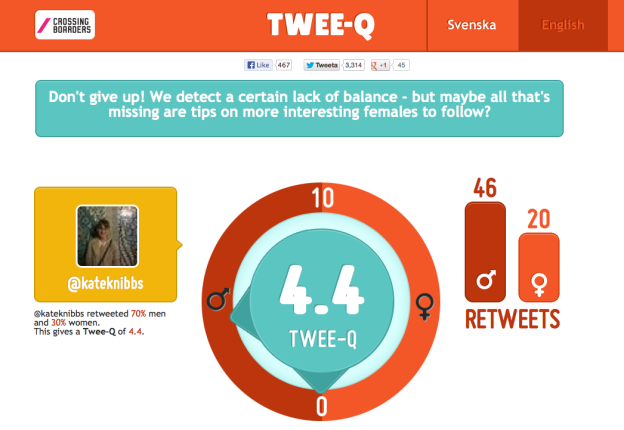 Even when we try to do all the right things, sometimes bias seeps into our actions. A British writer named Joan Smith and a Swedish equal opportunities organization called Crossing Boarders worked together to create Twee-Q, or the Twitter Equality Quotient, which gives you a score based on how many times you re-tweet men or women in an effort to point out bias in social media.

“Twee-Q uses a database of names featured in the US and Swedish censuses,” a Twee-Q rep tells us. “These are used for cross-referencing.” This means gender-neutral handles are excluded from the score, as are the handles of brands and companies.

You can check your own handle or anyone else’s, and the results may surprise you: I consider myself a feminist, but according to Twee-Q, I have a gender bias against my own sex. Out of a perfect score of 10, I got a measly 4.4. It turns out Wikipedia’s not the only thing with a gender problem. My Twitter account also skews male. And this isn’t a case of men being over-represented on Twitter, because the male to female user ratio is nearly equal. And my score is even worse than the average, which is 4.9. Yikes.

I’m not the only person guilty of favoring dude tweets – my editor, Molly McHugh, is guilty of the same (she would like me to add her defense is she religious follows NBA basketball players and writers). But go ahead and see for yourself, you can check out anyone’s score. And we’re in the same boat with Justin Bieber (4), Barack Obama’s account (which scored a pathetic 1.4), and even Twitter’s own Twitter account (6.6) have a male bias. Meanwhile, others choose women, like Gloria Steinhem, who impressively has a Twee-Q score of 0 since all of her re-tweets are women (you get a perfect 10 when you’re evenly balanced between men and women).

Even though the results probably aren’t totally accurate because they only take your last 100 tweets into account and they don’t measure people who have Twitter handles other than their names, the Twee-Q is still an interesting tool just to get people thinking about why they choose to re-tweet certain users instead of others and about the narrowing but still existing media bias out there.

Twitter to revamp verified accounts with a new label
Some blue check Twitter users were unable to edit their names
Mastodon surpasses 1 million monthly active users as Twitter backlash worsens
Musk says some impersonation Twitter accounts face permanent ban
TikTok is launching a dedicated gaming channel
What do the eyes mean on your Snapchat Story?
Elon Musk finally in charge of Twitter, reports say
Elon Musk officially owns Twitter now: a timeline of how we got here
How to use Twitter Advanced Search
Twitter to start charging for verification mark, reports say
Having trouble accessing your Instagram account? You’re not alone
Elon Musk considers bringing Vine back from the dead
Staying on Twitter? Here are two ways to make it easier