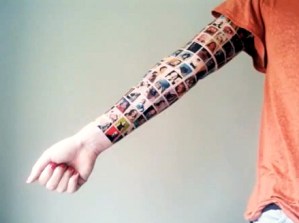 Just as we were beginning to think Facebook was starting to have an unreasonable effect on some of the world’s citizens, it appears that there is reason for hope. Humanity has not entirely lost its marbles. You see, the story of the woman having all 152 of her friends tattooed onto her arm appears to have been an elaborate hoax. Thank goodness for that.

News outlets around the world reported yesterday that a woman in the Netherlands had taken the seemingly extraordinary step of tattooing pictures of all of her Facebook friends onto her right arm. There was even a video showing the tattoos being put on. Coming in the wake of stories about people naming their babies Facebook and Like, this particular report didn’t seem that hard to believe.

However, Dutch News said on Wednesday that the tattoo artist who appeared in the video, Dex Moelker, has admitted to Dutch newspaper the Telegraaf that it was merely an advertising stunt for a company in the Netherlands that makes gifts out of Facebook profile pictures. The stunt has certainly given the company some publicity – as of late Wednesday, the YouTube video had been viewed more than a million times since being uploaded at the end of last month.

“It is a try-out tattoo, a transfer, that washes off in a couple of days,” she told the Telegraaf. According to Moelker, it took just a couple of hours to apply the transfer.

So while many readers of the report were imagining the complications that might ensue should the tattooed woman fall out with any of her friends, she was more than likely in her bathroom washing all the ink off with warm soapy water.

The only worrying thought is that the stunt may have inspired someone out there to get all 500 of their Facebook friends tattooed onto their face. For real.

YouTube gives its creators a new way to display corrections