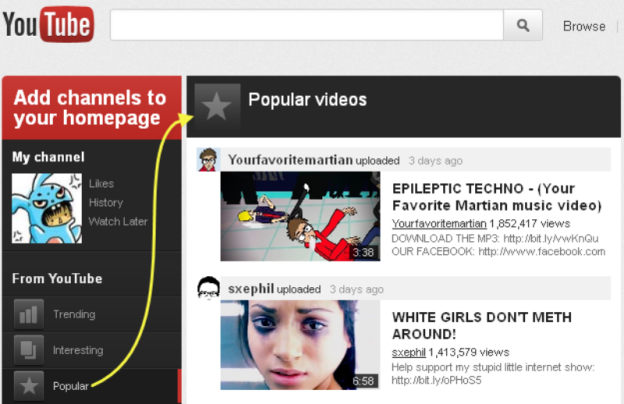 For the better part of the last year, Google has been hard at work turning YouTube into more than a home for funny animals and baby videos. The makeover has been in large part to supply its various outlets with more quality content as well as to find a platform from which it could compete with the likes of Netflix and Hulu.

While YouTube still remains user-friendly for the masses, it’s definitely transitioning into something that could challenge these more product-oriented services—or least that’s Google’s goal.

Now it appears that YouTube is getting the Google+ treatment, and an overhaul that will integrate the video service into the budding (and struggling) social network is on the horizon. This morning, The Next Web noticed some screenshots detailing the coming changes, most of which further personalize the site for its users.

Users will now see a dash similar to other social networking sites, meaning it’s positioned in a bar on the left-hand side of your screen. From there you can navigate the channels you subscribe to as well as showing off what’s trending, interesting, or currently popular on the site. We’ll also be treated to larger previews, and a new feature that shows you what videos people in your G+ Circles are sharing or broadcasting.

Given the fact the Google+ is an all-encompassing take on social networking, it will be interesting to see how people choose to share videos. Now that businesses can have Google+ Pages (and we’d assume Google will make good and provide the option for anonymous or alias-using accounts), it’s possible YouTube will become the home of fewer uploads. If that’s the case, sponsored and celebrity-branded channels will comprise most of YouTube and the non-professionals out there will defer to Google+.

Of course, that’s assuming the social network can get off the ground. YouTube is one of the most trafficked sites in the world, and G+ has been plagued by impressions that it is yet another Facebook clone. This might just be another way Google is trying to tie the Google+ ship to its other successful Web properties in hopes of better user numbers.