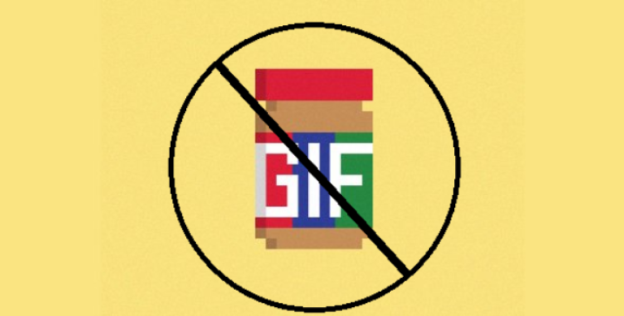 Now, I of all people am in favor of GIF-creator Steve Wilhite being honored for his consummate contribution to the Web. I am involved in curating (which is Web-snob code for “obsessively Tumblr-blogging to”) not one, not two, but three animated GIF blogs. I troll Giphy and Imgur on an all-too regular basis. I am part of a two-strong lobby to use Campfire as our in-office messaging client, so we can chat in embedded GIFs all day long. The day Google introduced the animated category to Image Search was a notable one in my book.

So when Wilhite clarified that GIF is pronounced with a soft “G,” as in “jif,” … well things got a little too real.

“The Oxford English Dictionary accepts both pronunciations,” he has said, reiterated in his acceptance of the Webby’s lifetime achievement award below. “They are wrong. It is a soft ‘G,’ pronounced ‘jif.’ End of story.”

Why you gotta do me like that, Steve? I have to say, this feels like a personal attack.

Last night brought to a halting screech a debate the Internet has joyfully and viciously held for years. And before you lambast me with any “Choosy developers choose GIF” noise and remind me that this isn’t the first time Wilhite has explained this (please, do not embarrass yourself; I Internet. I Internet a lot.), allow me to make an argument for GIF of the hard “G” variety:

There’s something so much more satisfying about the guttural, solid, firm GIF. It’s “graphics,” not “jraphics,” OK? There is no mistaking the hard “G,” no arguing with it. I’d like to take this moment to start the “Hard ‘G’ for me!” (yes, I hear it, yes I’m sticking with it) campaign. Shirts forthcoming. There will be snacks.

I’ve long stood my ground in the hard “G” versus soft “G” war, and you’d think that the inventor’s final word on the matter might sway me, but it doesn’t. I am too far gone. It’s too late for me. And if we’re being honest, part of my insistence on the hard “G” is to try and weed out all the softies: If we can just keep pushing through, hard Gers, future generations might never even know that there was such a phrase as “animated JIF.” I want my children and my children’s children and my children’s children’s children to grow up in a world where JIF is one thing and one thing only: A delicious sandwich spread, best accompanied by either jam or bananas. (We can talk about preferred PB complementary foods later – this is neither the time nor the place. I think we both know the place is Twitter, and the time is always.)

We’ve suffered a setback, sure – and a confusing one at that. Addicts Loyalists like myself have nothing but respect and admiration for what Wilhite gave to the Internet, but we also know that we’ve fought long and hard, and that this is no time to give up.

Plus, guys, The White House goes with the hard “G” GIF, so I mean … do you love America or not?

I compel all the hard “G” GIFers (that makes us sound frighteningly like truthers…) like myself to stay strong. We have but suffered a setback – remember, you can lose the battle and still win the war.

How to use text-to-speech on TikTok