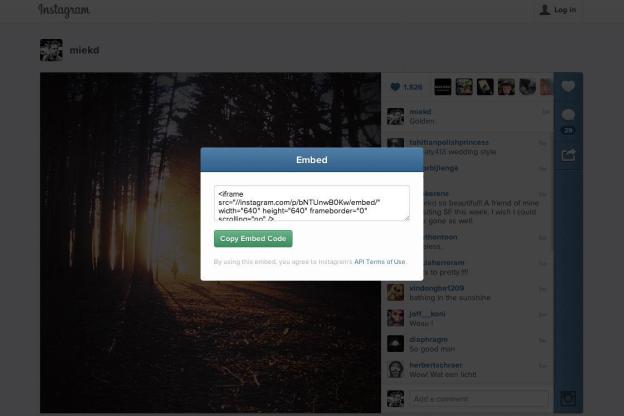 Instagram has finally rolled out the ability for users to embed videos and photos. In reality, it’s been a mere three weeks since video for Instagram was introduced, but the missing embed link has honestly been incredibly frustrating (and, of course, this frustration has long existed when it comes to still photos). Anyone who wanted to share their Instagram images and videos with the world without cross-posting like a madman was out of luck. Admittedly, this missing feature was probably most frustrating to the tech writers and bloggers out there whose WordPress- (or anything other than Tumblr) based sites had to find workarounds.

For videos, you had the option to push something to Facebook, make it public, and grab the embed code there; for stills, the same applied and you could find that download link and then reupload to your own site. Or you could use third party options out there. Regardless, a lot of steps were to be taken. But thankfully, Instagram has given us the native tools to pull and place our Instagrams wherever the hell we please.

For that, Instagram/Facebook deserve a giant thank you. Seriously, thank you. I was sick of spamming the bejesus out of my Facebook friends by pushing posts there and grabbing the respective code or finding download links (which really only worked with publicly posted Instagrams or those from people I am Facebook friends with). And resorting to a screenshot is really the last ditch effort out there. The “inspect element”-ing of this content got old fast, too.

It should be noted that it took awhile for Instagram to bring its embed game – perhaps because when it supported Twitter Cards, that was the simple solution. Twitter has been doing embeds right for awhile now. The ability to embed a tweet isn’t just better (it’s clickable, takes you directly to the tweet in question, pulls in metadata, and expands to show media content if the tweet has attached anything that supports Twitter Cards), it can keep publishers (and that’s all you casual bloggers, too) out of trouble. Using Twitter’s embedding tool means that whatever you’re reposting falls under the platform’s “reposting rights,” which are including in its Terms of Service.

Taking a screenshot of a tweet and using it won’t necessarily get you into legal trouble, but you can avoid all potential brouhaha by simply hitting up embed.

Twitter, of course, is naturally a much more public forum than the likes of Facebook and Instagram, so it makes a lot of sense for the embed option to be available. And this means things could be a little tricky for Instagram.

Plenty of people want their profiles linked back to, even if it’s for something as inane as an Instagram image or a tweet.

With Instagram, privacy is all or nothing: You either have an entirely public profile or your approved followers can see your images. That’s it. The fact that profiles aren’t all that easily searchable means you can live in (relative) Instagram anonymity if you want, even if you’re profile is public. If you aren’t pushing things out to Twitter or Facebook, then you can lie relatively low. The embed feature, however, means that it will only be easier and more intuitive for your content to wind up elsewhere.

With Facebook, you have the option of sharing how you want (or as close to that as Facebook will allow you to get). But Instagram doesn’t work this way; so if there were a handful of photos you’d like to publicly share and wouldn’t give a damn if they were embedded on sites across the Web … but there were others you’d rather keep off the Internets, well that’s too damn bad. Again: It’s all or nothing. Do know, however, that if you have a private Instagram profile and your photo is embedded, only people who you allow to follow, and are logged into the platform, you will see these images. Think of it like this – Instagram shows more than Facebook does via embed (which is … well, nothing, since Facebook doesn’t support it), and less than Twitter (where everything is public).

Before Instagram embeds, I sort of had the Twitter rule for my Instagram images: I left my profile public (something I changed post-Facebook acquisition), and if I didn’t care if the images were replastered somewhere, I would push them to Twitter and someone could grab the embed code there (if for some reason my feed of photos of dogs, mountains, and Star Wars paraphernalia was interesting to someone – which they were one time when the Portland Trailblazers used one of my images – clearly a moment I cling to). But when Twitter Card support was pulled, that rule was obviously thrown out the window.

So why did Instagram/Facebook finally introduce this? Videos probably. Third party options to embed the new videos were rushing out of the woodwork – and it didn’t help that Vine had enabled embeds. If you want your feature to get attention, you want people to write blog posts about the “10 best Instagram Videos” instead of the “10 best Vines,” you need easy embeds.

The screenshot workaround was sufficient for images, but it for obvious reasons wasn’t going to cut it for video. And thus, it would appear Instagram was peer-pressured into handing out the embed.

Personally, I think embedding makes the Internet better: It’s interactive, intuitive, deeper sourcing. Instead of a flat image, I can be transported to the original thing in question, including the conversations and comments happening it around it in real time that maybe didn’t even exist when that piece of content was originally reposted. It’s like a living, breathing, evolving source that doesn’t have to exist within the parameters of the single story that pulled it in. Plus, there’s the argument of authorship: Whether you think being a social content creator is a real thing or not, there are plenty of people who want their profiles linked back to, even if it’s for something as inane as an Instagram image or a tweet. Many people want to be as discoverable as possible.

But because this new feature inevitably means there will be more reposted Instagram content (that can then easily be tied back to users), there are those of you who will rush to your Instagram accounts and make them private. You could argue that embeddable content is something we should be able to opt-in to, but we’re not even allowed to opt-out of it. So for the time being, if you want your Instagrams to remain sacred and within the platform, you need to choose the private profile. And then pray you aren’t friends with anyone who might want to republish all those drunk brunch pictures I know so many of you have.