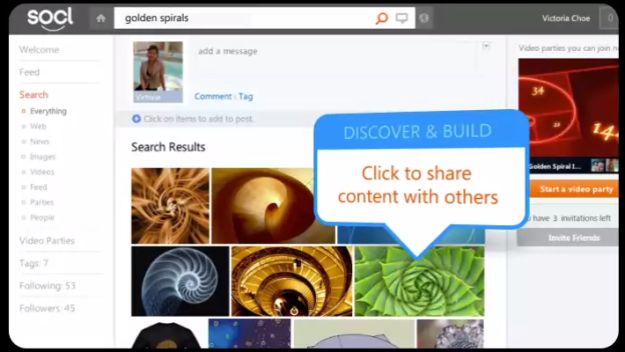 Last month we got a peak at Microsoft’s undercover social project, So.cl (pronounced “social”). Today the site has officially launched (although sign-up says the site is over-capacity and you’ll be put on a waiting list) and revealed that it’s more of a niche than we all thought.

Instead of standing as its own social network, So.cl is a Facebook application tailored to college students.

The connection here is pretty obvious. Facebook originally launched as a virtual community exclusively for college students. Of course the walls came down relatively quickly, opening the floodgates to everyone over the age of 13. And now Microsoft will leverage that former exclusivity by building a tool that takes us back to the good old days. Sort of… it seems that instead of being a digital platform focusing on the social side of college, So.cl is more of a social way to focus on the learning side.

“The Web, search, and social networking are changing the way students collaborate,” Microsoft Research said in announcing the new site. “To bring these elements together, Microsoft Research’s FUSE Labs is launching a site designed to give student the ability to network with peers, share useful information quickly, and build their own pages that collect information from both inside and outside the classroom—in a sense, transforming the Web and social networks into the new classroom.”

Students using So.cl are connected based on their interests (which are pulled from the Facebook social graph) and uses what’s become the prototypical social network UI. You follow contacts, create news feeds, and your Bing searches through the site are always public in order to see what the most popular searches are.

The element that really distinguishes So.cl is that it’s geared to be sort of like a running project for students studying social and digital media. The most interesting feature is a video collage tool powered by Montage. That said, what exactly is going to lure in Facebook users? We feel pretty confident saying that a handful of students would stick with consistently using So.cl.

To Microsoft’s credit, it’s always better to use what Facebook’s already created than work against it. So.cl’s mechanism means you’re connecting with people you otherwise wouldn’t be (via common interests or subjects versus searching for you exes or old college roommates).

We also think it’s a novel ideal to appeal to nostalgic Facebook users, who miss the college-centric aspect. It’s also true that the university classroom is beginning to weave in social media elements. While this is definitely just putting a toe in the water to see how it feels, it never hurts to experiment with burgeoning trends. At the moment it’s only available to students at the University of Washington, Syracuse University, and New York University.