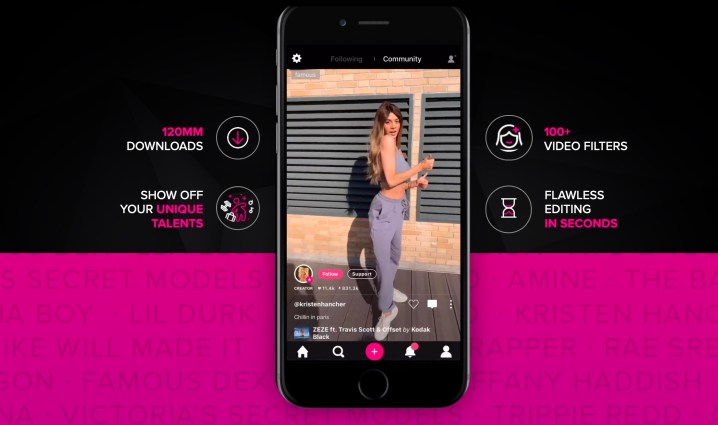 With Tik Tok’s future uncertain, the search is on for the next great social media sharing app, and Triller is in contention for the crown. Loved by countless celebrities and influencers, and with rapidly rising user numbers, Triller is poised to make a major dent in the world of social media. Positioned as a more mature, music-focused version of Tik Tok’s hugely successful video app concept, it might just be the right app at the right time for anyone looking to expand their social media footprints.

Originally launched in 2015 as a music video app, Triller lets you create short videos of yourself singing along to a song. Dubbed a “social video” platform, Triller has advanced, intelligent editing features that let you effortlessly craft professional-looking clips. Unlike TikTok, Triller’s interface is separated into two sections, Music and Social. In the beginning, Triller simply offered a new way to discover music through video clips with soundtracks. In 2016 it began to ramp up the social aspect, meaning creators can connect with others and share their content on a variety of platforms. It also expanded into other video categories such as comedy, fitness, and lifestyle. Despite being positioned as a bit of a different animal than Tik Tok, Triller’s interface is going to feel very familiar to a lot of people.

TikTok vulnerability could have allowed hackers to take over users’ profiles

What’s up with the name? “Trilling” is producing a quavering or vibratory sound, especially a rapid alternation of sung or played notes, says the Oxford English Dictionary. You could say Triller translates to “singer.”

Triller is available on the App Store, Google Play Store, and from a variety of other third parties.

Triller is all about taking part in the music

With an enormous database of tracks — thanks to partnerships with Warner Music Group, Sony Music Entertainment, and Universal Music Group, as well as Apple Music and Spotify — Triller is a dream for music-loving content creators. Triller’s Music section allows you to discover new music through the videos of other users, as well as browse all available videos made with any given track.

Triller got its start with support from the hip-hop and rap industries, so naturally a lot of the featured music is of these genres. Chance the Rapper and Lil Uzi Vert have both promoted new releases using Triller, contributing to the app’s steadily growing popularity. Triller has said it has the financial backing of Snoop Dogg, The Weekend, Marshmellow, and Lil Wayne.

Triller also has a pro side where you can generate income via its Gold and Gems features. Users can buy “Gold” via the app and gift it to creators they love.

How to use Triller

It’s not necessary to have an account to watch Triller videos, but you’ll need one if you want to upload your own videos or interact with other creators. Setting up a profile is simple; one notable feature is that, unlike TikTok, Triller gives anyone worried about their privacy the option to turn off data collection.

The “+” icon takes you to the video creation area. You can choose between making a Music or a Social video, which determines the section your video will appear for others.

For Music videos, the first option is to select from Triller’s enormous song library and then choose which part of the track you wish to appear in your 15-second clip. You can either record video straight on the app or else upload from your camera roll. Record multiple clips and Triller will magically compose a video that fits with the section of the song you’ve chosen. There are lots of cool filters to choose from, and if you don’t like the video Triller makes, you can edit it manually. After that, you write a caption, add a tag, and post the video.

The process is very similar for Social videos, with a handful of exceptions. You won’t be automatically encouraged to choose a song, for one, nor will Triller edit the video for you to sync with the music — since this section is more for lifestyle or speaking clips.

You can choose whether you want either type of video to be public or private, preview it before posting, and share it across different platforms.

Will Triller become the new supreme social media platform? In comparison to TikTok’s complicated privacy issues (not to mention threats of its demise by the President), Triller offers a great alternative for creating and sharing fun videos. Jump in and have fun!

Elon Musk just did something uncontroversial at Twitter
Instagram’s new Notes feature rolls out with several others
Many Twitter accounts could soon lose blue checkmarks
Twitter confirms revamped Blue pricing and features
Elon Musk reveals date for Twitter Blue relaunch
What is Twitter Blue and is it worth it?
Twitter closes offices as ‘work pledge’ deadline passes
What is Ambient Mode on YouTube?
What is BeReal?
How to delete a BeReal post
How to use TikTok’s voice changer
Twitter attempts to sort out verification system with new badges
Hive Social is my favorite Twitter alternative, but that’s not saying much