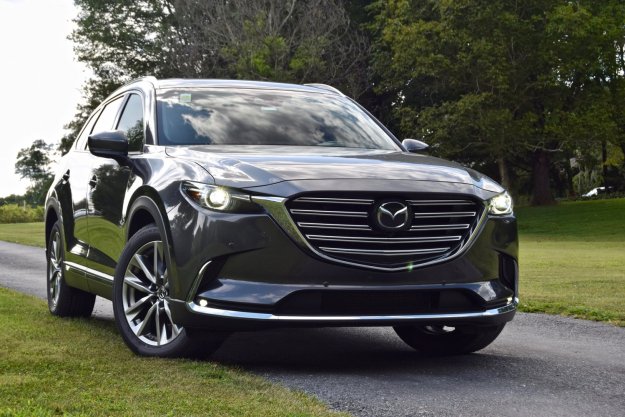 “Who ever said having a seven-passenger SUV had to be boring? Not the engineers at Mazda.”

Three-row SUVs have become the equivalent of cold brew at a local coffee shop. Everyone has different flavors, but the job remains the same: to give you a quick jolt of pep.

It’s the same with SUVs with three rows – ferry cargo, seat seven passengers, and be safe – despite the different shapes and sizes. The 2019 Mazda CX-9 is like other three-row SUVs in the respect that it too was created to carry a lot of passengers and a bunch of cargo. But this SUV has a performance kick that’s similar to a Mexican mocha and a shot of luxury thanks to thick, rich foam.

Prices for the Sport trim with front-wheel drive start at $33,325, continuing Mazda’s trend of offering affordable base trims. Our fully-loaded Signature all-wheel-drive tester was quite more expensive at $46,410. Few vehicles ever feel like they’re worth what automakers are asking for them these days and that holds true for even fewer SUVs. But our time with the CX-9 reveals that it’s well worth in excess of $45,000.

The CX-9 hasn’t changed in appearance since the second-gen model came out in 2016, but that’s not necessarily a bad thing. While boxy is in, Mazda continues to pen curvy designs that stir the soul. The CX-9 is more striking than the majority of other seven-passenger SUVs on the road with a design that manages to hide its size well. There’s also the strong resemblance to the rest of Mazda’s offering including the baby Mazda3 and the compact CX-5. The linear progression almost looks natural – from child to full-grown adult.

If the CX-9 looks like a million bucks on the outside, the interior remarkably looks even better. Mazda is arguably the king of making luxurious-feeling mainstream vehicles and the CX-9 follows the same recipe, but with more space. There’s a simplistic design to the interior that comes off as being high end. And because it’s still a Mazda, the buttons are placed logically and there’s no second guessing as to what button does what. The two-tone cabin in our CX-9 was sublime, as the CX-9 comes with Auburn Nappa leather seats as standard that are finished in a gorgeous shade of red and did wonders to raise the cabin. The color of the seats, well everyone who saw them loved the color of the seats. Smack another badge on the CX-9, and people might think you’re in something German and much more expensive.

Smack another badge on the CX-9, and people might think you’re in something German and much more expensive.

Quiet, comfortable, and gorgeous, if it sounds like we’re raving about the CX-9, it’s because we are. But even the CX-9 has its troubles and the big one lies in the very back of the SUV. The second-row bench seat may be comfortable and spacious for three, but the third row is a different story. It’s tight, being best for children and the lack of captain’s chairs makes squeezing into the back a chore. Cargo capacity isn’t great either. The SUV’s cargo figures are as follows: 14.4 cubic feet behind the third row, 38.2 cubic feet behind the second row, and a total of 71.2 cubic feet. Those figures are well behind other midsize offerings like the Kia Telluride and the Volkswagen Atlas, the latter of which can hold a total of 96.8 cubic feet of cargo.

The Signature trim we drove had all of the comfort features one could ever want. Three-zone automatic climate control, heated front and second-row seats, ventilated front seats, a heated steering wheel, and a 12-speaker Bose audio system are all standard. A moonroof is standard, as well, but it’s hilariously small and a letdown when competitors offer massive panoramic view holes. Brownie points are earned for the mega cool butterfly opening for the center console.

Major news for the CX-9 for the 2019 model year, Apple CarPlay and Android Auto are now included in the mix. Both smartphone capability systems are standard on everything besides the base Sport trim. Opting for anything above the Sport trim brings an 8-inch touchscreen that utilizes Mazda’s intuitive infotainment system – a 7-inch unit is standard on the base trim.

If your YouTube video was in this quality, you’d probably move on and switch to scrolling through Reddit.

The all-new Mazda3 might be running a new infotainment system, but the CX-9 still uses Mazda Connect that came out back in 2014. It might not be the best infotainment system on the market, but it works well and is easy to use. Our only complaint is when it comes to switching to and from Apple CarPlay (or Android Auto), which requires scrolling through multiple options and a few screens. If only there were a button to make it easier. Also, it’s odd that touchscreen functionality isn’t available when the car is on the move, forcing you to use the dials. It’s not bad once you get used to it, but it’s an odd design feature.

The base Sport trim doesn’t come with a class-leading list of safety equipment, but it does have the major stuff. Standard tech includes a rearview camera, blind spot monitoring, and automatic emergency braking, which Mazda calls Smart City Brake Support.

The Signature trim’s loaded with goodies, which include a 360-degree camera, lane-keep assist, lane departure warning, front and rear parking sensors, pedestrian detection, Advanced Smart City Brake Support, and adaptive cruise control with stop and go. It’s a list that’s worthy of the CX-9’s price tag. An odd, but useful safety feature the CX-9 has is an individual seatbelt light for each of the five rear seats. It goes beyond just telling you that someone back there doesn’t have their seatbelt on, but so far to tell you the middle seat in the second row is the culprit. Good luck next time Billy.

We didn’t have an issue with the CX-9’s list of safety features, but the SUV’s rearview camera and 360-degree monitor have abysmal quality. Like maybe 180p? Let’s put it this way, if your YouTube video was in this quality, you’d probably move on and switch to scrolling through Reddit.

Few can match Mazda at this price level when it comes to manufacturing cars that are inherently enjoyable to drive. With three rows of seating and a curb weight of 4,383 pounds, it would be wishful thinking to hop into the CX-9 and expect it to handle like a seven-passenger MX-5 Miata. For consumers that enjoy driving, the SUV doesn’t feel far off of being a natural progression of the little roadster for how much larger it is. Being enjoyable on twisty roads is one thing, but the CX-9 also impresses on the open highway. That’s where the majority of models will spend their time on the road, so covering all the bases is a good skill to have. But it’s the CX-9’s ability to take a corner that will impress the most.

While the SUV’s chassis has the unnerving ability to shrink around you on a curvy road, it’s the engine that plays a large role in the CX-9’s lively feeling. After years of not having enough power, every CX-9 now comes with a turbocharged 2.5-liter four-cylinder. Power is rated at 250 horsepower and 310 pound-feet of torque, but that’s on 93 octane. Go with 87 at the pumps to save some money, and power goes down to 227 hp. The four-cylinder comes with a six-speed automatic and shuffles power through the front wheels as standard throughout the majority of the lineup. All-wheel drive, of course, is available for an extra $1,800. The Signature trim we tested is only available with all-wheel drive.

The horsepower figure might not sound like a lot, but it’s the torque that dominates the party. Others may be using V6 engines and more gears than a preschooler can count, but the CX-9 never feels short on power. There’s no lag, as the engine provides a grunt of torque that’s smooth and relatively quick to ride. While little noise makes its way into the cabin, you get to hear a little bit of the engine doing its thing and it sounds throaty.

Quiet, comfortable, and fun to drive, the CX-9 is a three-row SUV that doesn’t make you hate your life for the ability to ferry an entire family around town. If there’s one thing that can be faulted, it’s with the SUV’s suspension. It’s a tad on the firm side on rough roads, which is what makes it so good around corners, but results in a rougher ride than other midsize SUVs. Want something that corners and feels this good to drive? That’s the trade-off.

There are a dizzying amount of three-row midsize SUVs on the road, but we’ve chosen two of the latest SUVs – the Volkswagen Atlas and the Kia Telluride – as its primary rivals. Despite being the oldest, the CX-9 is the most expensive of the three. The Telluride upholds Kia’s claim to fame of offering excellent value as it starts at $32,785. Volkswagen’s Atlas is even cheaper with a starting price of $31,890. The most affordable CX-9 is the Sport trim with front-wheel drive that carries a price tag of $33,325.

The CX-9 did well in both the National Highway Traffic Safety Administration (NHTSA) and the Insurance Institute for Highway Safety’s (IIHS) crash tests. The NHTSA gave the SUV a five-star overall safety rating, with four stars in both of the front crash tests and a four-star rating in the rollover test. With the IIHS, the CX-9 was named a Top Safety Pick. That rating, though, only applies to Sport trims with the optional Power Driver’s Seat package or Touring trims and above.

The Touring trim, which is just one step above the entry-level Sport, is the best value option. It comes with all of the safety features that are listed above, except for the 360-degree camera. More importantly, it’s the most affordable trim to come with Apple CarPlay, Android Auto, and the larger 8-inch touch screen. There are some luxury features included in the mix, like leather seats, heated front seats, an auto-dimming rearview mirror, and a power rear liftgate. Prices start at $36,275 for a front-wheel-drive model and an extra $1,800 for all-wheel drive. Compared to the Sport that starts at $33,325, the Touring’s extra features make it a bargain.

Three-row SUVs shouldn’t look or drive this good. Leave it up to Mazda to blend its “Zoom-Zoom” qualities with enough room for seven passengers. Competitors like the Kia Telluride may have more passenger room, larger cargo areas, and more rugged looks, or more technology like with the Volkswagen Atlas, but the CX-9’s cabin borders on luxurious, it’s more fun than other three-row SUV should ever be, and it comes with good standard features (as long as you stick with the Touring and above).

Yes. The CX-9 proves that you don’t need to have Lamborghini Urus or Maserati Levante money to get into an SUV that’s fun to drive. And if driving isn’t your thing, buy the CX-9 for its plush cabin, good fuel economy, and grand touring highway manners. Who ever said having a seven-passenger SUV had to be boring? Not the engineers at Mazda.