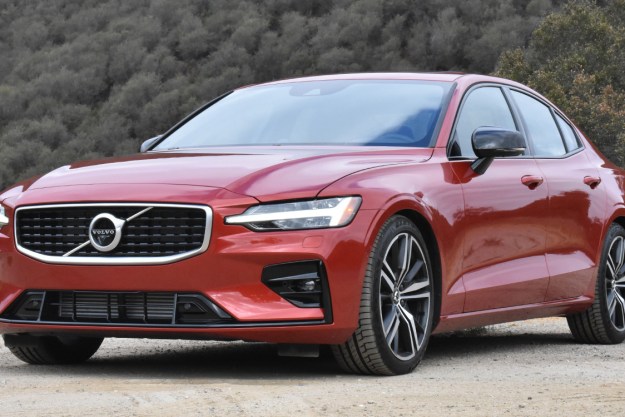 “The 2019 Volvo S60 builds on the strengths of recent Volvo cars to make a compelling luxury sedan.”

Volvo has been on a roll lately.

The Swedish automaker has found a way to wrap its traditional focus on safety in more attractive new packages. The combination of the Scalable Product Architecture (SPA) platform, a new line of four-cylinder powertrains, and Sensus infotainment systems has proven to be a winner in the XC90 and XC60 SUVs, S90 sedan, and V90 wagon. Volvo also managed to imbue the XC40 compact crossover with similar qualities.

Expectations are high for the 2019 Volvo S60 sedan, the latest SPA-based model from the Swedish automaker. The S60 is also the first Volvo built in the United States, indicating how important it is to this market. Volvo is betting big that this redesigned sedan will lure buyers away from cars like the BMW 3 Series, Mercedes-Benz C-Class, Audi A4, Cadillac ATS, Lexus IS, Infiniti Q50, Jaguar XE, and Genesis G70.

The S60 will be built in Charleston, South Carolina, but Volvo invited Digital Trends to Santa Monica, California, to drive it. Three main variants will be offered: a front-wheel drive T5 (starting at $35,800), all-wheel drive T6 ($40,300), and all-wheel drive T8 plug-in hybrid ($54,400) with Momentum, Inscription, and R-Design trim levels. In addition to traditional purchasing or leasing, the 2019 S60 is available through the Care by Volvo subscription service. Volvo briefly offered a Polestar Engineered limited edition through Care by Volvo, but all 20 cars designated for the U.S. this model year are already claimed.

As with all recent Volvos, the interior is one of the S60’s biggest strengths. The cabin features a pleasing and distinctive design, and our R-Design and Polestar Engineered test cars sported high-quality materials, albeit with cheap-looking plastic in some spots. Considering that both are high-end trim levels, one would expect that level of quality, but not every automaker is on the same level as Volvo. The BMW 3 Series and Infiniti Q50, for example, show obvious evidence of cost cutting regardless of trim level. A panoramic moonroof is standard, but lower trim levels get leatherette rather than real-leather seats.

Both the R-Design and Polestar Engineered have heavily-bolstered front bucket seats that are appreciably sportier feeling than what we typically expect from Volvo. That’s definitely a good thing, as these seats help keep the driver and front passenger firmly in place during hard cornering without sacrificing comfort. We also really liked the Polestar Engineered model’s yellow seatbelts. Why can’t other automakers do fun things like that?

The S60 uses the latest version of Volvo’s Sensus Connect infotainment system, with standard Apple CarPlay/Android Auto and a built-in Wi-Fi hotspot. The 9.0-inch portrait-oriented touchscreen and four-tile main menu are familiar from other recent Volvos. But the automaker claims the infotainment system in the S60 boasts a number of improvements, including 50 percent greater processing power, faster startup, backup camera access, and navigation recalculation, and better voice control.

On the road, we found this version of Sensus Connect to be a mixed bag. The touchscreen was very responsive, and it’s easy to access functions that are built into the main menu, like navigation and audio. But other functions require considerable swiping and scrolling. While Volvo did put climate control on the main screen, we would have preferred physical knobs or buttons for setting temperatures.

We also weren’t impressed with the startup time for the backup camera, which only activated after an appreciable pause. A significant fisheye effect also distorted camera images. The system in our R-Design test car crashed twice, which Volvo representatives attributed to the car being a pre-production vehicle. We had no problems with our Polestar Engineered test car, or a V60 station wagon (which uses the same system) we tested on the same trip.

The S60 compares well to its rivals on interior space, although it isn’t class leading in any particular area. Trunk space is fairly generous at 15.6 cubic feet, but the S60 can’t match the 17.0 cubic feet of the BMW 3 Series. But if you want a Volvo with lots of cargo space, there’s always the V60 wagon.

Not surprisingly for safety-obsessed Volvo, the S60 is available with an array of driver aids. Highlights include autonomous emergency braking (with the ability to detect other vehicles, pedestrians, cyclists, or large animals), adaptive cruise control, blind spot monitoring, lane-keep assist, speed limit information, a driver-attention monitor, and systems that try to prevent the driver from straying into an oncoming lane or off the road.

Our test cars were also equipped with Volvo’s Pilot Assist system, which keeps the car centered in its lane at speeds up to 80 mph, provided there are clear lane markings and curves are gentle. We tested Pilot Assist, as well as the S60’s adaptive cruise control, in what should be their natural environment: Los Angeles-area highways. Both systems worked smoothly, with Pilot Assist providing gentle steering inputs and adaptive cruise control braking gradually, even when another car cut in front. However, Pilot Assist had trouble reading lane markings on our test section of highway, and was defeated by even the slightest curves.

When it comes to performance, Volvo starts with a few basic ingredients, and piles on more until you’re left with the automotive equivalent of a seven-layer dip. The base 2019 S60 is the front-wheel drive T5, which uses a 2.0-liter turbocharged four-cylinder engine producing 250 horsepower and 258 pound-feet of torque. The all-wheel drive T6 adds a supercharger, bumping output to 316 hp and 295 lb-ft. All S60 models have an eight-speed automatic transmission.

Volvo also offers a T8 “Twin Engine” plug-in hybrid powertrain, which pairs the T6’s turbocharged-and-supercharged engine with an electric motor. The gasoline engine drives the front wheels, while the electric motor drives the rear wheels. This combination is good for 400 hp and 472 lb-ft. The Polestar Engineered bumps the T8’s output to 415 hp and 494 lb-ft, and also adds upgraded brakes and suspension. The car carries the name of Volvo’s Polestar performance division, which is now being spun off into a separate brand for high-end green cars.

But Volvo will only build 20 Polestar Engineered cars for the 2019 model year. Those cars, offered exclusively through the Care by Volvo subscription service, have already been spoken for. Volvo Americas CEO Anders Gustafsson told Digital Trends that a higher-volume follow up model is a possibility. He said that, “if customers would like to buy that car, we’re going to build that car.”

The S60 T6 R-Design we tested has more horsepower than a turbocharged four-cylinder all-wheel drive BMW 330i xDrive, and only four less horsepower than the six-cylinder 340i model (which isn’t available with all-wheel drive). The Volvo also outguns base and midrange versions of the Audi A4, Genesis G70, Infiniti Q50, Lexus IS, and Mercedes-Benz C-Class. However, the Infiniti Q50 Red Sport 400’s 3.0-liter twin-turbocharged V6 makes 400 hp and 350 lb-ft of torque, while the Genesis G70’s optional 3.3-liter twin-turbo V6 produces 365 hp and 376 lb-ft.

The S60 awkwardly straddles the line between traditional luxury car and sports sedan.

The Polestar Engineered is meant to compete with the likes of the Audi S4 and Mercedes-AMG C43, while offering a bit of plug-in hybrid greenness. The Mercedes and Audi can’t quite match the Volvo’s power, or its acceleration. Volvo claims its car will do zero to 60 mph in 4.3 seconds, compared to 4.4 seconds and 4.5 seconds for the S4 and AMG C43, respectively.

The S60 doesn’t make as clear a case for itself on the road, however. Whereas the larger S90 sedan doubles down on old-school luxury with a pillow-soft ride and laid-back attitude, the S60 awkwardly straddles the line between traditional luxury car and sports sedan. The S60 is very refined, with a cabin that almost completely blocks out road noise. But even in “comfort” mode, the ride quality is quite harsh. Normally this is an acceptable tradeoff for sharper handling, but the S60 wasn’t exactly fun to fling through corners, either. Add to that steering that felt like it had been injected with Novocaine, and an engine that sounded like a food blender at high revs, and it’s clear the S60 is better at sedate cruising than canyon carving.

Even the performance-oriented Polestar Engineered didn’t get our blood pumping. We loved the extra power, and felt it was applied more smoothly than in the T6. But the car still felt very heavy and awkward in corners, despite an upgraded suspension. Oddly, it was also hard to modulate braking because the pedal didn’t respond unless pushed hard. We think this is a result of trying to combine powerful mechanical brakes with the regenerative-braking system of a plug-in hybrid. And while some plug-in hybrids initiate regenerative braking automatically, allowing you to slow down without touching the brake pedal, the S60 only does so when switched into a special “B” mode.

The EPA rates the T6 R-Design at 25 mpg combined (21 mpg city, 32 mpg highway). Comparable figures for the Polestar Engineered model are not available at this time, but Volvo does expect it to get about 28 miles of all-electric driving range.

Volvo does not have a stellar reputation for reliability. For the 2018 model year (the most recent with available data) Consumer Reports ranked Volvo 23 out of 27 major manufacturers in reliability. The previous-generation S60 received a predicted-reliability score of “average” from the magazine; no other Volvo model performed better. J.D. Power ranked Volvo about average in overall dependability.

The T6 R-Design is the only one of the two S60 variants we drove that you can actually buy, and we’re fine with that. While we enjoyed the Polestar Engineered model’s 415 hp and cool design touches like its yellow seatbelts, we don’t think it goes far enough in the pursuit of performance. We’d love to see a more complete package akin to the outgoing S60 Polestar.

On the other hand, the T6 R-Design offers plenty of power (316 hp is nothing to sneer at), and the R-Design trim level gets its own sporty styling elements, as well as Nappa leather sports seats and a 600-watt Harman Kardon audio system. Volvo does offer an even more powerful (1,100-watt) Bowers & Wilkins system, but at $3,200, only hardcore audiophiles need apply. For less than that ($2,500) you can add Pilot Assist, a 360-degree camera system, LED headlights, and a head-up display, which we think is a much better value.

The 2019 Volvo S60 is an impressive addition to an already strong lineup. While Volvo did try to make this new sedan a bit sportier than its recent models, it’s the S60’s design, comfort, and overall refinement that truly set it apart from the competition. Volvo has another hit on its hands.