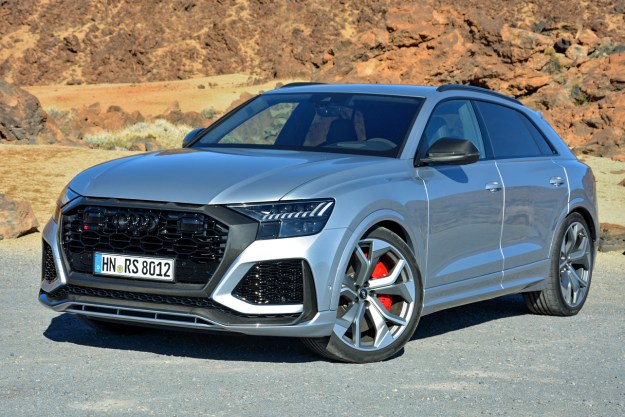 The hybrid car segment was woefully bland at the beginning of the decade that’s about to come to a close. Gasoline-electric technology was often a science fair project-like compilation of parts that saved fuel while making a boring car even less exciting. As 2020 nears, carmakers from all over the automotive spectrum have turned the definition of a hybrid on its head with compelling models that are more than the sum of their drivetrain’s parts. The 2020 Audi RS Q8 is one of them.

The RS Q8 is a sportier evolution of the Q8 that’s positioned at the top of Audi Sport’s SUV range. Introduced at the 2019 Los Angeles Auto Show, it’s still several months away from its market introduction, so the German firm hasn’t finalized pricing, trim levels, and other market-specific details yet. We don’t know how much it will cost, but keep in mind that the regular Q8 carries a base price of $68,200, so pricing will almost certainly start above the six-digit mark. That’s just an estimate; full details will surface in the weeks leading up to its on-sale date in the U.S.

What makes the RS Q8 a hybrid?

I thought you’d never ask. Let’s get one thing out of the way: This is not a fuel-sipping hatchback like a Toyota Prius, and it’s unable to move if its engine is turned off like the plug-in Q5 TFSI E can. Its main source of power is a mighty, 4.0-liter V8 engine twin-turbocharged to 600 horsepower and 590 pound-feet of torque. The eight spins the four wheels via an eight-speed automatic transmission and the latest evolution of Audi’s time-tested Quattro all-wheel drive system. If you’re experiencing déjà vu, that’s likely because the same drivetrain powers the second-generation RS 7 Sportback, a car so quick it gave my phone wings when I drove it for the first time. The RS 6 Avant that’s finally headed to America uses it, too.

The hybrid system toils away in the background without drawing unnecessary attention to itself, and the driver never needs to think about it.

So far, so good, except it doesn’t sound like a hybrid, does it? Keep reading the specifications sheet and you’ll learn about a belt-driven, 48-volt alternator-starter that starts the V8 in a flash after it stops at a light to save fuel, and powers many of the onboard electronics. The mild hybrid system is surprisingly compact, so the parts that make it up don’t challenge the occupants or their luggage for space in the cabin. You don’t even notice it’s there; it silently toils away in the background without drawing unnecessary attention to itself, and the driver never needs to think about the system.

Audi’s engineers added another string to the RS Q8’s bow. Its cylinder-on-demand technology does exactly what you think it does. It’s not part of the hybrid system, to be clear, but it turns the V8 into a frugal V4 by shutting down four cylinders when additional power isn’t needed. If you’re racing to the store to buy dinner before your in-laws arrive, you’ll want to summon the V8’s full output. If you’re cruising along, barely touching the throttle, you won’t even notice four cylinders are sleeping.

How does it balance tech and comfort?

The RS Q8 plays the hybrid game under the radar, but it’s proud of the Audi logo on its nose. Sit behind the steering wheel, and you’re surrounded by materials that are nice to look at and to touch. The cockpit’s basic layout is identical to the regular Q8’s, and to what you find in other recent additions to the company’s range, like the A7 fastback and the A6 sedan. In the driver’s seat, you face a digital instrument cluster that’s configurable using buttons on the steering wheel. The driver can choose to have the map stretch nearly the entire width of the 12.3-inch screen, or opt for a sportier, RS-specific layout, for example.

If the car is off, it looks like there’s no touchscreen for the infotainment system; that’s because it blends into the black panel on the dashboard. Turning on the ignition (which is a quarter-sized button next to the stubby gear selector) wakes up the screen and boots up Audi’s MMI Touch Response infotainment system. The RS Q8’s powertrain illustrates how far hybrid technology has come in 10 short years, and its infotainment system proves in-car connectivity has become far more advanced during the same time period. Thankfully so, because early systems universally sucked; it’s no wonder Apple CarPlay and Android Auto became hugely popular as turnkey alternatives to the native software packed in new cars.

Displayed on a 10.1-inch touchscreen, MMI Touch Response’s main interface is smartphone-like in the sense that the home menu consists of clearly labeled icons logically arranged in rows. I like having the ability to move them around — again, like on a phone. The graphics are sharp and color-coded when needed, which makes the software intuitive to use in spite of the wealth of information it contains. There’s a second, 8.6-inch screen with other functions right below it. It replaces the bulky dials, knobs, and sliders normally used to adjust the climate control settings, and handwriting recognition technology lets users manually write an address into the infotainment system. I can’t even read my own handwriting, and the system understood what I was telling it, so I’m willing to bet it will read yours. The catch is that, if you’re left-handed, you’ll need to awkwardly reach across to use this feature. It’s better to ask your passenger to do the writing or use voice commands.

There’s a wireless phone charger under the central armrest, and Apple CarPlay and Android Auto compatibility come standard. I’ve been in the Android camp since I got my first smartphone, a Samsung Galaxy S II, in 2011, so I can’t comment on how CarPlay looks, but booting up Android Auto is as simple and straightforward as you’d expect. Plug it in, wait for the car and the phone to talk to each other, and you’re good to go. The system looks sharp on Audi’s touchscreen. Speaking of, it’s a good idea to carry a microfiber cloth, because fingerprints appear on the screen after a few hours of use.

The Q8 isn’t Audi’s biggest SUV, that honor goes to the Q7, but it’s big enough and correspondingly spacious. I’m 5-foot, 11-inches, and I can sit behind myself without touching the driver’s seat. The rear bench is roomy enough for three average-sized adults, and the trunk offers 30.5 cubic feet of space for your gear. Folding down the rear seats unlocks a total of 60.7 cubes.

That 60.7-cubic feet of trunk space is good news if you’re planning a camping trip, but it’s not what you want to hear if you’re an engineer asked to create a performance car. Horsepower and torque help offset weight, so the RS Q8 has a lot of both. Keep in mind 600 hp and 590 lb.-ft. of torque were figures reserved for supercars up until a few year ago. Floor the accelerator pedal, and the V8 overcomes a hint of turbo lag to send the RS Q8 from 0 to 62 mph from a stop in 3.8 seconds. It feels as quick as it sounds. The eight-cylinder doesn’t stop accelerating until the speedometer indicates 189 mph, a figure I wasn’t able to verify on the twisty roads of the Spanish island of Tenerife, where I got my first taste of Audi’s highest-performance SUV.

As I pointed the RS Q8 toward a 12,200-foot volcano named Mount Teide, I found out tech isn’t limited to the screens embedded into the dashboard

As I pointed the RS Q8 toward Mount Teide, a 12,200-foot volcano in the middle of the island, I found out tech isn’t limited to the screens embedded into the dashboard. There’s a ton of chassis wizardry happening behind the scenes. The standard four-wheel steering system turns the rear wheels in the opposite direction of the front wheels at low speeds, like in parking lots or when going around a sharp bend, and in the same direction at higher speeds, such as when traveling on the highway. Follow an RS Q8 up a mountain pass, keep your eyes locked on the rear axle, and you can see it happening. It’s really cool to watch, but that’s not the point. The system makes the Q8 a lot more nimble by reducing its turning radius. It’s not TT-like, but it feels markedly smaller than you’d expect considering its plus-sized exterior dimensions.

The adaptive air suspension frantically multitasks to deliver buttoned-down handling when needed, a comfortable ride when the occasion calls for it, or anything in between. There’s also a driving mode labeled Off-Road that lifts the body to clear small obstacles, like volcanic boulders that would happily leave a bad gash in the oil pan the first chance they get. This mode allowed me to carefully venture about 20 yards off the beaten path for a gorgeous photo opp, and briskly return to the asphalt after realizing I’d summoned a dark cloud of disapproval from a walkie-talkie-wielding park ranger. Oops.

On-road it is, then. With more twisty sections ahead, I stopped searching for an idyllic photo spot and focused on how the RS Q8 behaves. The suspension does an admirable job of keeping body lean in check, and the shift paddles mounted behind the steering wheel engage the next gear up or down in a split second, which makes sprinting out of a turn effortless. The 22-inch alloys (which, by the way, are the biggest alloys Audi has ever offered as standard) hide brakes bigger than the steel wheels on my 1972 Mini, so the RS Q8 slows down as quickly as it accelerates. One aspect I’d change is the steering, which lacks feel. It’s not so much the weight — it’s plenty firm in Dynamic mode — but I wish the system more accurately conveyed what the front wheels are doing. It felt a little disconnected throughout the entire drive, and a car like this deserves better steering.

My time behind the wheel was too short to accurately measure real-world fuel economy. The U.S. Environmental Protection Agency (EPA) hasn’t tested the car yet, but numbers will be available by the time the RS Q8 goes on sale.

Similarly, the National Highway Traffic Safety Administration (NHTSA) hasn’t crash-tested the RS Q8 yet. The standard Q8 received a five-star overall rating, and the RS model is fundamentally the same, so we expect similarly good results. The list of available electronic driving aids will include adaptive cruise control (which works as advertised), a 360-degree camera that gives the driver a clear view of what’s around the car, and a blind spot monitoring system. It’s reasonable to assume that, like other Audi models, the RS Q8 will carry a four-year, 50,000-mile warranty.

Performance, tech, and space. Ten years ago, you had to pick two. Plenty of cars were roomy and relatively smart, but they were as exciting as a United Airlines meal. Driving the ones that were sporty and high-tech often felt like stepping on something you’d find in Target’s toy aisle. The RS Q8 is part of a new breed that blends all three, and it’s a well-rounded package. It’s not for everyone — not every motorist needs a 600-hp SUV in their life, but those who do won’t be disappointed.

The sorcerer and its evolution in movies

There could be a brand new meteor shower visible on Monday

Save up to $450 in the Saatva Memorial Day Mattress Sale

The most common Roku problems and how to fix them

Chromebook Memorial Day Sale: Get a new laptop for $98

Where to find the best Memorial Day electronics sales in 2022

Two galaxies captured by Hubble are a hotbed of star formation