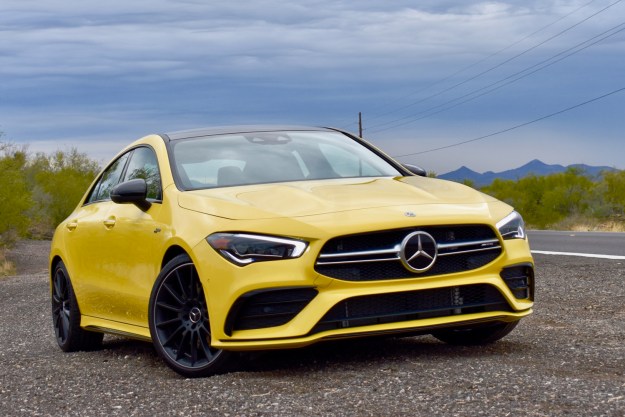 “The CLA is a real Mercedes-Benz, for better and for worse.”

As the first of Mercedes’ line of compact cars to reach the United States, the first-generation CLA lowered the bar of entry to this vaunted luxury brand. In terms of tech, the redesigned 2020 Mercedes-Benz CLA is a major upgrade over the previous generation. Yet it’s still not as compelling as before.

That’s because Mercedes now has another compact four-door, the A-Class. Both cars are built on the same platform, and feature the same tech. The differences mainly come down to styling – and price. Mercedes saw the addition of the A-Class as an opportunity to bump up the price of the CLA. The base CLA 250 model starts at $37,645. That’s $4,150 more than a base A-Class, and $3,600 more than a 2019 CLA.

What do you get for that extra coin?

As with the previous generation, Mercedes calls the 2020 CLA a “four-door coupe.” This is a category Mercedes invented with the larger CLS-Class, and refers to four-door cars with sleeker styling than traditional sedans. The CLA highlights that difference.

The main difference between the CLA and its A-Class sibling is at the back. Where the A-Class has a squared-off tail, the CLA has a more streamlined version shared with Mercedes’ two-door coupes. The rear three-quarter view is also where the CLA’s lower roofline is most apparent. Walking up to this car from the front, it’s easy to mistake the CLA for an A-Class because, apart from those two main styling changes, it basically is.

Beauty is in the eye of the beholder, but the measuring tape shows that the CLA’s more expressive styling comes with a slight penalty in interior space. While the 2020 CLA is a bit bigger than the outgoing model, that low roof means less headroom than you get in an A-Class. However, the CLA offers more trunk space. Overall, the CLA seems to balance form and function pretty well.

Tall drivers will likely have similar issues with the upcoming BMW 2 Series Gran Coupe, as BMW went the “four-door coupe” route with that model, as well. The Audi A3 is a conventional sedan, but the CLA still offers more headroom and trunk space (the Audi has more legroom, however). The Acura ILX offers similar headroom to the CLA, but significantly more legroom and trunk space. It’s also worth noting that, for the price of a CLA, you could have a nicely-equipped midsize sedan from a mainstream brand, with vastly more room than any of these cars.

We liked the interior design, particularly the distinctive round air vents and freestanding horizontal screen.

At least the CLA’s interior feels more upscale than the average Toyota. Materials are definitely a step down from other Mercedes models, but have a quality feel. The seats in both CLA models we tested felt very comfortable, with a more cushioned feel in the CLA 250 and extra bolstering in the AMG CLA 35, in line with that car’s sporty character. We liked the design of the interior as well, particularly the distinctive round air vents and freestanding horizontal screen. To our eyes, it looks better than the awkwardly-integrated screens used in Mercedes’ more expensive cars.

The single screen, which Mercedes designers call “the surfboard,” does the work of a conventional infotainment touchscreen and digital instrument cluster. Mercedes’ graphics have come a long way. The virtual gauges look sharper than the ones in Mercedes’ flagship S-Class from a few years ago. Text uses Mercedes-distinctive typeface, giving everything a unique identity without compromising legibility.

The screen runs the latest MBUX (Mercedes-Benz User Experience) infotainment system, which was introduced on the A-Class. That means you get standard Apple CarPlay and Android Auto, as well as a voice assistant that responds (officially) to the prompt “Hey, Mercedes” (just “Mercedes” will suffice, we’ve found). It’s designed to respond to natural-sounding commands so, for example, you can ask it to turn up the cabin temperature just by saying “I’m cold.”

Voice assistants in cars can feel gimmicky, but we could see ourselves using this every day. When we needed to change SiriusXM stations or adjust the climate control, we found ourselves saying “Hey, Mercedes” rather than reaching for the touchscreen itself. The voice recognition isn’t perfect (even words that sound vaguely like “Mercedes” will unintentionally activate it), but it’s good enough to render the CLA’s touch-pad controller redundant.

The CLA also gives drivers plenty of options when it comes to infotainment controls. The touchscreen is responsive and easy to reach, and is augmented by shortcut buttons for important menus. As with other Mercedes models, the CLA has logically arranged steering wheel controls.

Both CLA models we drove felt worthy of the Mercedes three-pointed star in terms of ride quality and overall refinement. The AMG model is legitimately quick. But the CLA also fails to stand out from the crowd.

All CLA models feature a 2.0-liter turbocharged four-cylinder engine with a seven-speed dual-clutch transmission. The CLA 250 is available with front-wheel drive or all-wheel drive, while the AMG CLA 35 is all-wheel drive only.

Nothing about the driving experience is particularly exciting or memorable.

On the road, the AMG CLA 35 doesn’t feel as quick as numbers suggest. AMG may have built its reputation on loud, brash hot rods, but the CLA 35 is too afraid to compromise its luxury pedigree to have fun. The handling left us cold, too. We’ll see if things improve when the more hardcore AMG CLA 45 hits the streets.

The AMG CLA 35 was supposed to be the rock star of the CLA lineup, so we dialed back expectations when we switched to the entry-level CLA 250. What you get is a comfortable but unremarkable driving experience.

The CLA 250 has more than enough power for exploiting gaps in traffic (something we can attest to after driving it through the tail end of morning rush hour in Phoenix) and soaks up bumps well, but it’s unremarkable. That’s a problem. This is a Mercedes, and owners will expect it to feel special. The CLA 250 doesn’t deliver that. It’s competent, but never tries to over-deliver.

Like most other luxury brands, Mercedes is pretty stingy when it comes to standard driver aids. Autonomous emergency braking and a driver-attention monitor are standard, but you have to pay extra for things like adaptive cruise control, lane keep assist, and blind spot monitoring. The latter stays on for three minutes after the engine is shut off to keep you from stepping out into the path of an oncoming car. Still, it’s hard to justify making features like these optional when most are available as standard equipment on less-expensive cars.

The 2020 CLA is a new model, so it’s difficult to predict future reliability. As a brand, Mercedes has a mixed reputation when it comes to reliability. The CLA’s newness means crash test results from the Insurance Institute for Highway Safety (IIHS) and National Highway Traffic Safety Administration (NHTSA) aren’t available yet.

As hard as it is to say “no” to more power, the AMG CLA 35’s sterile driving experience makes it hard to justify that model’s price premium over the CLA 250. We would add all-wheel drive ($2,000), the Premium Package ($1,650), which includes the “surfboard” screen and blind spot monitoring, and the Driver Assistance Package ($2,250) which adds more driver aids, including adaptive cruise control and lane keep assist.

The 2020 Mercedes-Benz CLA shows that entry-level luxury cars are a tricky proposition. In terms of fit and finish, refinement, and tech, the CLA is every inch a Mercedes. But it also comes with a Mercedes price tag, and that’s a problem.

If you’re willing to forego the high-end badge, you can get a lot more car for the CLA’s starting price. Similar money will buy a roomier midsize sedan or compact crossover from a mainstream brand. If you want a smaller, sporty four-door with all-wheel drive, the Volkswagen Golf R is a much better value than the AMG CLA 35. On the other hand, a full-optioned CLA will likely push close to Mercedes C-Class territory.

Even among its peers, the CLA doesn’t pull off a clear victory. The Audi A3 may be showing its age, but it’s a much more engaging car to drive. The Acura ILX can’t really compete with the CLA on luxury or tech (it’s based on an old Honda Civic platform), but it is a much better bet when it comes to reliability. And BMW is about to launch a CLA fighter in the form of the 2 Series Gran Coupe that could give Mercedes a run for its money.

No. As nice as it is, the CLA is poor value for money.