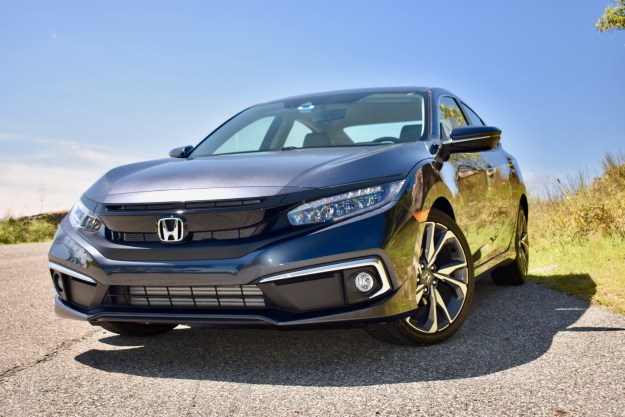 “The Civic is one of the best compact sedans around, and a more complete car than ever before.”

Everyone has to grow up eventually.

Remarkably for a nameplate that’s been around since the 1970s, the Honda Civic is synonymous with youth. Cheap and simple, the Civic is a common choice for someone’s first car. The rambunctious character of older Civics also made them a great introduction to the fun side of driving. Civic-driving teenagers have traditionally moved up to an Accord or CR-V once they earned a bit more money and started families. But now the Civic is trying to grow up with its owners.

The 2019 Honda Civic Touring sedan is more than just cheap transportation for new drivers. It faces tough competition – such as the recently redesigned Mazda 3, Toyota Corolla, and Volkswagen Jetta – for an ever-shrinking number of sales as buyers continue flocking to high-riding crossovers. For Honda’s evergreen compact car, the carefree days of youth are over.

As typical for a modern compact car, the Civic has gained size and toys. The Touring model’s $28,330 base price – a $7,850 premium over the entry-level Civic LX – includes features like leather seats, 18-inch wheels, and a navigation system. So optioned, the 2019 Civic Touring is well equipped to catch the eyes of buyers looking to upgrade from a well-worn older model to something fancier. But more stuff doesn’t automatically make a car better. Does the Civic still have what made it great in the first place, or was it in too much of a hurry to grow up?

Like a recent college graduate at a job interview, the Civic tries to make a strong first impression. Previous generations had fairly plain styling, making them great canvases for customization. Honda took a different route when it introduced the current-generation Civic for the 2016 model year.

The Civic sedan (Honda also offers coupe and hatchback body styles) has a low, sleek roof line, an imposing grille that looks like it was designed for post-apocalyptic combat, and taillights that wrap themselves around the rear edges of the bodywork. Given the need to stand out from a large crowd of compact cars, and lure buyers away from crossovers, the more extroverted look of the current-generation Civic makes sense. The Mazda 3 and Toyota Corolla also rely heavily on exterior styling as a differentiator. Honda made some small styling changes for 2019, including a reworked front fascia and more chrome trim, but the Civic sedan doesn’t look dramatically different.

A stylish exterior often comes at the price of interior space, but the 2019 Civic sedan doesn’t suffer much. Measurements are consistent with other compact sedans, although the Civic’s low roofline seems to have had an impact on headroom, which is below average for the segment. Uber drivers take note: while the Civic’s 37.4 inches of rear legroom is as good as it gets for a compact sedan (our Touring tester also had heated rear seats), the Volkswagen Jetta matches it, with more headroom for taller passengers. The Civic does have more trunk space than the Jetta, but not as much as the Kia Forte or Nissan Sentra. Notably absent from this comparison is the Corolla, as Toyota didn’t have a full set of measurements available at press time.

A stylish exterior often comes at the price of interior space, but the 2019 Civic sedan doesn’t suffer much.

The interior is much more conservative than the exterior, which isn’t a bad thing. Everything is where it needs to be, and material quality is fairly good for a car in this price range. For 2019, Honda even redesigned the cupholders to include different size options. Our one complaint was with the steering wheel, which seemed unnecessarily large, and made it hard to find a comfortable driving position.

The overall interior layout didn’t change much for 2019, but the tech did. A new 7.0-inch touchscreen (compatible with Apple CarPlay and Android Auto) is backed by analog shortcut buttons, as well as an honest-to-goodness volume knob. A detail as small as a single knob may not seem like a big deal, but automakers have yet to invent a better way to adjust audio volume while driving. Kudos to Honda for realizing that.

The screen itself was easy to use. We appreciated having hard buttons for key menus, which is a less-distracting approach than forcing the driver to tap icons on the screen itself. Graphics were plain but effective, and we did notice that the screen in our test car was a bit slow to boot up when starting the car. Another downside is that the 7.0-inch screen isn’t available on the base LX trim level, which doesn’t get Apple CarPlay or Android Auto either.

Driving dynamics have traditionally set the Civic apart from other compact cars. Honda hasn’t always gotten the formula right but, more often than not, the Japanese automaker’s rev-happy engines and suspension-tuning expertise have elevated the Civic above a mere driving appliance. So how does the 2019 Civic sedan measure up?

Our test car had the optional 1.5-liter turbocharged four-cylinder engine, which is available only with a continuously variable transmission (CVT). With 174 horsepower and 162 pound-feet of torque, it’s a significant upgrade over the 158 hp and 138 lb-ft of the naturally-aspirated 2.0-liter four-cylinder engine in lower-level Civic models. That engine is available with a CVT or a six-speed manual. Honda also offers a sportier Si version of the Civic sedan with an upgraded version of the 1.5-liter turbo four making 205 hp and 192 lb-ft, as well as a manual transmission.

The steering is precise, and the chassis effortlessly takes a set in corners.

With the Si entrenched as the sportiest Civic sedan, our Touring tester adopts a more relaxed pace. Civics of old impressed with lively steering, or engines that seemed willing to rev until they exploded, but what impressed most about the 2019 Civic sedan was its refinement. It’s just a nice place to be, with a quite cabin and a comfortable ride – even on roads as cratered as the surface of the Moon. Among compact sedans, only the Volkswagen Jetta comes close.

That doesn’t mean the Civic has lost its old moves, though. Make no mistake, this still a great car to drive. The steering is precise, and the chassis effortlessly takes a set in corners. The turbocharged engine provides more than enough thrust, although it comes on in a less frenetic way than Honda’s old naturally-aspirated four-cylinder engines. The Mazda 3 also feels a bit sharper, and quicker to respond when cornering. But we think Honda struck a good balance with the Civic. The driving dynamics are a perfect match for the Civic’s refined manners. This car is fun when you want it to be, and civilized when you need it to be. If you want a little more aggression, buy the Civic Si. Or, better yet, the Civic Type R hatchback.

Civic Touring sedans like our test car are rated at 33 mpg combined (30 mpg city, 38 mpg highway) by the EPA. That’s a bit lower than the 36 mpg combined (32 mpg city, 42 mpg highway) of the EX and EX-L models, which use the same engine and transmission. The EX and EX-L are the most fuel efficient Civic sedans. They narrowly beat the gasoline Toyota Corolla in gas mileage, and even come close to the 37 mpg combined of the Chevy Cruze diesel. Toyota offers a Corolla Hybrid, but Honda has the Civic-based Insight hybrid.

Honda has one of the most comprehensive packages of driver aids in the compact-car segment. Standard on the 2019 Civic, Honda Sensing includes adaptive cruise control, autonomous emergency braking, forward collision warning, lane keep assist, automatic high beams, and lane departure warning with road departure mitigation. Only the Toyota Corolla offers a similar array of features as standard equipment. Adaptive cruise control is an optional extra on most other compact sedans.

Civic EX and higher trim levels also get the Honda-exclusive LaneWatch system, which uses a camera mounted on the passenger’s side exterior mirror to virtually eliminate the driver’s right-side blind spot. It’s a handy feature, although Honda plans to discontinue it in favor of simpler (and cheaper) blind-spot monitoring systems.

Speaking of safety, the 2019 Honda Civic sedan received a five-star overall rating from the National Highway Traffic Safety Administration (NHTSA). The sedan also received the top “good” score in all Insurance Institute for Highway Safety (IIHS) crash tests, as well as the maximum “superior” rating for front-crash prevention tech. But the headlights received a “poor” score, even after Honda modified the LED units on Touring models for 2019 to create a wider and longer beam.

Honda offers a three-year, 36,000-mile, basic warranty and a five-year, 60,000-mile, powertrain warranty. That’s about average for this segment, but Hyundai and Kia offer longer terms. Honda has a great overall reputation for reliability, and the current-generation Civic sedan received an above-average reliability score from Consumer Reports.

As equipped, our Touring test car offered a lot for the money. But some of its features, such as the 18-inch wheels, leather upholstery, heated rear seats, and embedded navigation, aren’t really essentials. So we would step down to the Civic EX. For about $3,000 less than the Touring, the EX still gets the 1.5-liter turbocharged engine, Apple CarPlay/Android Auto, the 7.0-inch touchscreen, heated front seats, LaneWatch, and Honda Sensing. That’s the stuff that really counts. We’d also advise any buyers to seriously consider the Civic Si sedan, which can be had for around the same price as the EX, but features more power, sportier suspension tuning, and a manual transmission.

The 2019 Honda Civic sedan has a different feeling to Civic of old, but Honda still kept the essence of what made those cars great. The 2019 Civic feels more mature, keeping its fun-to-drive character, but adding comfort and refinement to the mix. The Civic has long been many buyers’ default choice, and this 10th-generation model reminds us why that is the case.

Yes. The Civic remains one of the best compact sedans around, and it’s a more complete car than ever before. Growing up isn’t so bad.