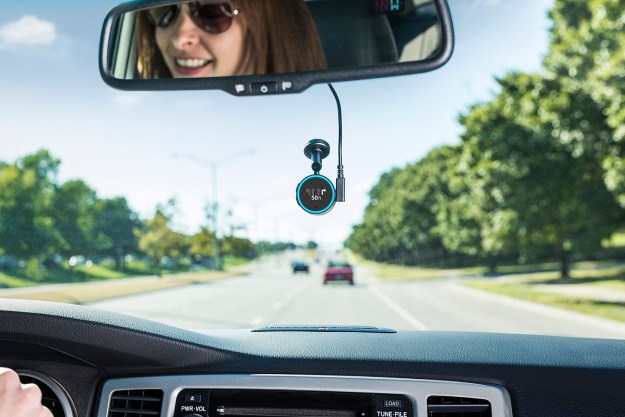 While the smartphone has, for many, supplanted dedicated GPS hardware in the car, Garmin hopes its latest navigation device, Garmin Speak, will change your mind. It brings together the company’s GPS navigation service with Amazon Alexa, providing voice-controlled music streams, audiobooks, news and weather, as well as access to compatible smart home devices.

Perhaps the major surprise is that the Garmin Speak delivers these features without the large, color touchscreen that you typically associate with in-car navigation. Instead, the device resembles a tiny Echo Dot that mounts to your windscreen and displays directions via a small, black and white OLED screen. Use voice commands to ask questions you need answered on the road about navigation, entertainment control, or the latest NBA results, and Alexa will get right on it.

Priced at $150 and, at launch, available only in the United States, Garmin Speak is a compact, well-constructed device that includes the iconic blue Echo LED ring and two buttons on the left for manual control (if desired – the idea is to use voice commands throughout, though). There’s a mic button at the top for privacy, while the action button on the bottom can be used to confirm instructions.

Garmin Speak delivers these features without the large, color touchscreen

Powered by your car’s 12V connector, the device is designed to affix to your windscreen via an adhesive, magnetic mounting pad. It holds the Speak firmly in place, but means you’ll be left with a dark blob on the windshield at all times, which is pretty ugly. Worse still, with no integrated battery, you’ll need to find a neat way to hide the long cable that connects the device to your car’s power socket. Garmin suggests unhooking your car’s ceiling panels and tucking the cord away, but it all feels a bit painful for what is, essentially, a wirelessly controlled device.

Once powered on, you pair Garmin Speak with your phone and car stereo over Bluetooth, allowing the device to respond to requests over your car’s speakers. Older cars without Bluetooth audio can connect to Speak using an AUX connection. If you’re desperate, Garmin has integrated a tiny speaker in the device, but you really wouldn’t want to listen to it for too long, The integrated speaker is small, and has lots of treble but little bass, as you’d expect on such a small device. Output is audible, but quite shrill and is an inferior option to connecting to your car’s stereo. From there, download and install the Garmin Speak app and you’ll be guided through configuration. Link up your Amazon Alexa account, enable the Garmin skill, ask Alexa to ask Garmin to activate your device and, some time later, you’re ready to go. Garmin has done its best to make setup as simple as possible – an achievement considering you’re hooking up three pieces of hardware to two distinct software services, but it’s still work and a great reminder why your smartphone is simply a magical device.

If you’ve previously used Amazon Echo or another Alexa-enabled device then you’ll be right at home with Garmin Speak. The device has full access to the Amazon assistant’s core features and third-party skills, so it offers a convenient way to play music from an Amazon library, Spotify or supported Internet radio service, hear the latest news and weather reports, switch on the thermostat at home and even stock up on Tide as you drive past the supermarket.

Here, a device like Garmin Speak proves how useful it can be to have Alexa (or another personal assistant) available in the car for certain tasks. Whether you need a dedicated, $150 microphone hooked up to your smartphone to perform these tasks, I’m not so sure. Many of these tasks can already be performed on the road by Google Assistant and, if you’re deeply integrated in Amazon’s ecosystem (and I’d suggest you’d need to be to really benefit from the Garmin Speak), you could always drop an Echo Dot into a cup holder for just $50. It’s not as cute, but it’s a heck of a lot cheaper.

Of course, alongside standard Alexa features, Garmin Speak is a voice-controlled navigational device. We’ve previously been a big fan of Garmin’s excellent in-car GPS devices, which are generally simple to use and offer intuitive features such as Real Directions, which uses landmarks to make turn-by-turn instructions clearer. Adding the Garmin skill certainly aces a standalone Echo Dot in the car – the question is how well Speak serves for in-car GPS.

Well, it works, but using Garmin Speak for navigation can be an awkward experience. First, GPS support is delivered through an Alexa skill. So that means you’ll need to ask Alexa to “ask Garmin” to find your location. It’s a double hop that can become wearing, like those times when you get into an argument with your other half and you stubbornly converse via the kids. “David, ask your mom whether we need to turn at the next block or the one after.”

Garmin Speak’s microphone does a decent job of picking up your voice, even on noisy roads, but attempting to set destinations using voice only can be tricky without the confirmation of a screen. If we missed the response to a destination command, we were immediately worried we were heading in the wrong direction. In cases where we needed to visit a particular store with several branches in the vicinity, we really missed the ability to bring up a list of potential locations and simply tap the one that we needed. With Garmin Speak, we found ourselves having to remember the store’s street address or intersection to be assured we would be directed correctly.

In these situations, you can open up the Garmin Speak app on your phone and check where you’re headed. Here you can also configure home, work and school addresses as shortcuts. But you’re back to using your phone as the GPS, making you question what Garmin Speak is really bringing to the table. Over time, perhaps we could re-learn how best to direct a GPS device via voice, or grow to trust Alexa/Garmin Speak a little more. But over the course of a few days with the device, we didn’t feel compelled to switch away from our integrated in-car GPS, or Google Maps and Waze on our phones.

In an attempt to reinvent the in-car GPS, Garmin Speak adds utility with a personal assistant but at the same time removes the simplicity and clarity of a touchscreen user interface.  We have no doubt that personal assistants like Alexa, Siri and Google Assistant will become an essential feature in car entertainment systems of the future, but we’re not convinced a dedicated GPS device is the way to deliver them.

Garmin’s imaginative reinvention of the GPS proves the benefit of a connected personal assistant on the move, but the loss of a touchscreen makes Garmin Speak less convincing than a traditional GPS, or your smartphone’s navigation app.

Certainly, Garmin Speak is a cheaper alternative than buying a new BMW or Mini with Alexa integration, but it’s three times the cost of simply dropping in an (admittedly larger) Echo Dot, if you really need Alexa in your vehicle. Depending on your smartphone, you may be able to replicate many of the device’s features with Google Assistant and have the bonus of a large touchscreen interface.

Garmin Speak is undoubtedly a brave move to reinvent a category – dedicated in-car GPS – that’s in decline. Amazon Alexa is here for the long term, no doubt, but if Garmin Speak fails to gain traction, the question would be how long the hardware and Garmin Alexa service would be supported.

If you’re deeply committed to the Amazon ecosystem and you need Alexa as your co-pilot, then you can expect to see a range of in-car integrations heading your way over the next few years. Garmin Speak delivers many of the Amazon Echo’s features (and more) in a small, compact and mobile device. Just don’t be surprised if its novelty factor fades quickly.