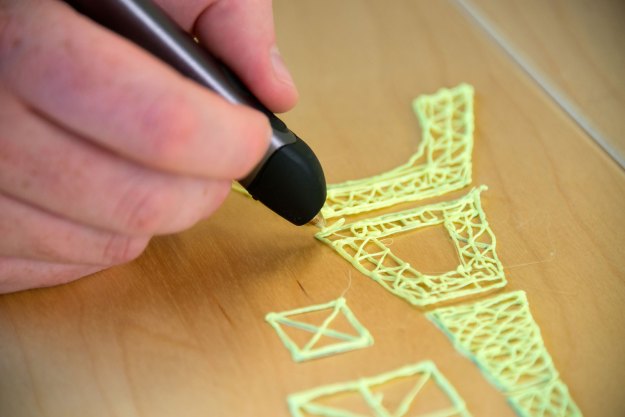 “While you probably won’t find many practical uses for it, 3Doodler is an incredibly fun tool for creative people of all ages, abilities, and skill levels.”

When the original 3Doodler pen dropped on Kickstarter back in 2013, it was an almost instant success. After reaching its initial funding goal within hours, the device — which at the time was world’s first “3D-printing pen” — went on to rack up more than $2.4 million before the campaign finished.

Now, less than two years later, the company is back with a new-and-improved design that’s slimmer, sleeker, and easier to use than ever before. We took it for a spin to see if drawing 3-dimensional objects in midair is as easy as they made it look in that Kickstarter pitch video. Here’s what we found.

The 3Doodler 2.0 boasts some significant improvements over its predecessor. In addition to a considerably smaller form factor, the second-gen 3Doodler also features a new-and-improved nozzle design, a better heating algorithm, and variable speed and temperature controls. It’s also got a new feed system that makes extrusion more reliable and consistent, and compatibility with a slew of new accessories. No matter how you look at it, version 2.0 is better than ever.

Getting started with the 3Doodler 2.0 is absurdly simple. It’s essentially a freehand 3D printer, and what you lose in precision, you gain in simplicity. Just plug it into a power source, shove in a stick of ABS or PLA plastic, and flip the switch to “high.” An indicator light will tell you when the nozzle tip is hot enough to start extruding — at which point you simply hold down the “squirt” button until molten plastic starts coming out. It takes a few seconds to get going, but once it does, you’re off to the races.

3Doodler 2.0 knocks the socks off version 1.0 in just about every way, but build quality and design are definitely the most significant. In addition to a new sleek new aluminum enclosure, the new version is also ¼ the size of its predecessor, so it’s considerably more comfortable to hold in your hand.

Other additions, such as variable speed buttons and temperature controls, make it easier for users to draw at the pace they feel comfortable with. There’s even a new “continuous feed” mode you can activate by double clicking the extrude button — a feature that allows you to draw large objects without having to strain your hand by holding down a button for the duration of your doodling.

Simply put, 3Doodler is to 3D printing what the ballpoint pen is to the inkjet printer. Because it’s designed to be used freehand, it’s not nearly as accurate or precise as a traditional 3D printer. But that’s not to say it’s not a useful tool for creativity. With a little bit of practice and imagination, you can make some amazing things with this gizmo.

3Doodler 2.0 knocks the socks off version 1.0 in just about every way.

The thing we liked most about 3Doodler 2 was that you don’t really need any kind of technical knowledge to start using it. You don’t need to fiddle with 3D modeling software or download pre-made STL files to load on to your printer. The device, quite literally, puts creativity at your fingertips. It eliminates the technological barriers between your mind’s eye and what comes out of the nozzle.

The downside is that with this freehand approach, printing performance is directly related to your drawing skills. Just like sketching in two dimensions, it takes a fair bit of practice before you can start making really cool stuff. For the first half an hour or so, the only “doodles” we could make were abstract globs of plastic with erratic lines and spirals coming out of them. But after a few botched attempts at making things, you start to get the hang of it.

3Doodler’s simplicity extends beyond just drawing and creating objects. It’s also ridiculously easy to maintain. Thanks to its incredibly basic design, it almost never gets clogged or jammed — and on the off chance that it does, the tips can easily be unscrewed for closer inspection, or just cleared out with a needle.

The pen’s design also allows for anumber of upgrade possibilities. You won’t be able to change any of the machines innards, but 3Doodler does offer a variety of different extruder tips, as well as a portable battery pack that allows you to use the pen without being tethered to an outlet.

Honestly, you’re not going to make many practical, functional, or truly useful objects with 3Doodler — but that’s not really what it’s made for. At the end of the day, it’s really just a fun artistic tool. If you’re looking for a legit 3D printer that you can make useful objects with, you should definitely look elsewhere. 3Doodler probably isn’t what you want.

That said, if you like the idea of drawing objects in three dimensions, without having to jump over all the hurdles that lie between ideation and creation (like software, computer models, and properly calibrated machinery) then the newest 3Doodler should definitely be in your artist’s toolkit.

Topics
What is AMD 3D V-Cache? Here’s how it could change PC gaming
AMD might deal a huge blow to Intel with new 3D V-Cache CPUs
Apple may be preparing an avalanche of M2 and M3 Macs this year
AMD is bringing 3D V-Cache back to Ryzen 7000 — but there’s a twist
Hurry and buy this 15-inch HP laptop while it’s $250 for Cyber Monday
Cyber Monday: Alienware 34-inch QD-OLED gaming monitor is $100 off
Don’t mind refurbished? This Samsung Chromebook is $59 today
Dell XPS 13 Cyber Monday deal knocks $250 off the popular laptop
Save $350 on the HP Spectre x360 2-in-1 laptop for Cyber Monday
Save $200 on the MacBook Air (M1) with this Cyber Monday deal
Selling fast: This 14-inch Lenovo laptop is $249 for Cyber Monday
This Alienware gaming PC with an RTX 3080 Ti is $580 off for Cyber Monday
Get a SanDisk Extreme Pro 4TB SSD for a ridiculous price today