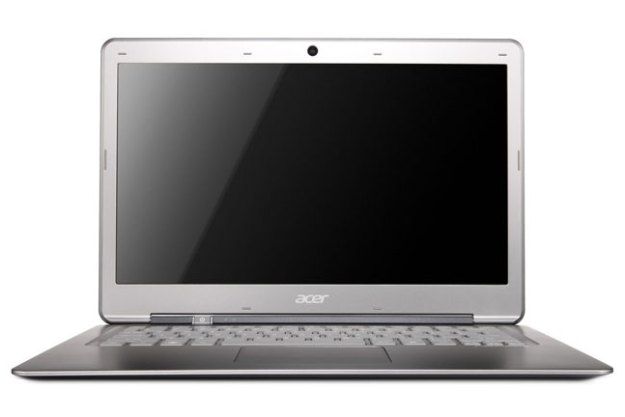 “If you want a MacBook Air, but you don’t want OS X or can’t tolerate the $1,300 price tag, the Acer Aspire S3 is a good alternative.”

Ultrabooks, the super-thin laptops developed to specifications laid down by Intel, are now available. Among the first wave is Acer’s Aspire S3.

The company’s Timeline products have been among the best ultraportables for several years, offering an affordable alternative to those who couldn’t swing a MacBook – or an Asus U series. Acer’s focus on value has not been abandoned here, either, as the S3 retails at just $900, undercutting competitors by at least $100.

That buys you an Intel Core i5 processor – but it’s an ultra-portable variant clocked at 1.6GHz rather than a standard part locked at 2GHz or above. Don’t let that fool you into thinking this is not a powerful machine, however, because all the other components are impressive. There’s the same Intel HD graphics found in this processor’s more powerful siblings, 4GB of RAM, and both a 320GB standard hard drive and a 20GB solid-state drive (SSD).

Not bad. But cramming all this into a small frame is sure to be difficult, and the price tag of $900, even if it is $100 less than the competition, means this is far from a budget computer. Let’s find out what this Ultrabook really offers.

First thing’s first. Is the S3 able to compare to a MacBook Air?

That’s not to say it’s better, or even as good. But it’s close. This laptop does not have the unibody design of a MacBook, but that doesn’t seem to make any difference in the laptop’s rigidity and luxury. Picking up the S3 is like picking up a thin, solid piece of metal. It’s hard to imagine there’s enough hollow space inside for a hard drive, processor and RAM.

If there’s anything that lets the S3 down, it’s the lid. Though solid, the hinge mechanism is too loose to properly support the relatively hefty metal surrounding the display. As a result, normal typing can induce some screen wobble, particularly if the surface you’re using is not perfectly solid.

Stranger still, the black material covering the hinge appears to be soft-touch rubber or plastic. Perhaps this supposed to be luxurious, but we would rather Acer used a stiff, exposed metal hinge.

Nitpicks such as these should not be brushed aside, but they reveal how solid the Acer is in general, as there’s nothing else to point to as a flaw or problem. We’re surprised that any Ultrabook is able to come within spitting difference of the Air’s quality. We’re even more surprised that the cheapest Ultrabook on the market is able to do so.

Opening the S3 reveals a standard chiclet keyboard. This is actually a bit unusual for Acer, and as far as we can see, this keyboard design is all-new for the S3. Aesthetically, we would prefer if it used black keys rather than dull silver, but the existing design fits the laptop well enough.

More importantly, it’s pleasing to use. More key travel would be appreciated, but it would be understandably difficult to engineer into a laptop this thin. As it stands, the key feel is at least as good as your typical 13-inch ultraportable. The layout also works well. All keys are as large as they should be with the exception of the function keys (which is typical on a laptop) and the arrow keys.

You won’t need the arrows keys, anyway, because the touchpad is among the best to ever grace a Windows laptop. Companies have been trying to copy Apple’s large glass touchpad for ages, but this time it’s actually done right. The surface is large, the integrated buttons require a light touch to activate, and the multi-touch features are shockingly smooth.

The Aspire S3 offers two USB 2.0 ports and a full-size HDMI port around the back, along with an SD card reader on the right. That’s it. While a MacBook Air is similarly stripped, the Thunderbolt port offers more flexibility than HDMI. More expensive Ultrabooks like the Asus UX31 offer USB 3.0 and mini VGA output, making them more practical in a variety of scenarios.

One of the traditional issues with PC ultraportables is display quality. Unfortunately, this is something the S3 does not address.

On offer is a glossy display with a resolution of 1366 x 768. Not all glossy displays are built the same, however, and the one in the S3 appears to be among the most reflective of the breed. When typing in a sunlit room, it was easy to see our own hands on the display — and that was only after we tilted the display down so that we didn’t have to stare at our own mug the entire time.

Despite the lack of any visible speaker, Acer decided to slap this laptop with a Dolby Home Theater badge, which does nothing to improve the meager audio. You can listen to podcasts and watch YouTube videos in a quiet room, but music is not pleasing, and moderate background noise can obscure whatever you’re listening to.

At just shy of three pounds, the S3 weighs more on paper than you might expect, but this heft isn’t noticeable when using the device. In fact, the laptop feels exceptionally light, making it easy to carry around in a bag or not.

This, combined with the 13.3-inch display and thickness of less than 0.7 inches at the laptop’s thickest point, makes for a very portable laptop indeed. Any bag that can fit it should be able to accommodate the weight and bulk. Better still, the low power requirements allow Acer to provide a small, lightweight power adapter that is easy to take on long trips.

You’ll need it. Battery endurance comes courtesy of a measly three-cell unit that is integrated into the body of the laptop and, thus, not user serviceable. Though the processor in this laptop is designed to only sip power, a battery of this size will give up sooner rather than later, as was shown in our testing. Battery Eater Standard clawed through the battery in an hour and 43 minutes, while the less intense Reader’s Test extended life to 4 hours and 43 minutes. This is not great life for a ultraportable, and for some users it will be the laptop’s greatest weakness.

No matter if it’s plugged in or not, this laptop remains reasonably cool. The main source of heat can be found on the left hand side of the laptop, and it will become toasty at times. Using the laptop at load in your lap will quickly become uncomfortably.

Our review unit arrived with a number of preinstalled icons, including Netflix, eBay, Acer Games and McAfee Internet Security. Some of these, such as the Netflix icon, are nothing more than links to the service in question.

The large number of icons is annoying, but they don’t cause much trouble. Just delete the shortcuts and you won’t remember they were ever there.

McAfee’s Internet Security is the exception, since it will routinely prompt users to purchase the full service for protection. As always, this is a pain, but it’s hard to ding the S3 for this much because virtually all laptops on the market bundle some sort of anti-virus.

Standard inside the S3 is the Core i5-2467M, which boasts a base clock speed of 1.6GHz and a Turbo Boost maximum of 2.3 GHz. Intel built this processor specifically for small, light systems that can’t fit larger, hotter variants. When you see part like this, you can be certain it’s going to be slower than a normal version of the same brand, but how much do you sacrifice?

SiSoft Sandra’s Processor Arithmetic test resulted in a combined score of 27.2 GOPS, while the 7-Zip benchmark returned a combined score of 5,623. Typical scores for standard Core i5 processors are around 35 to 42 GOPS in Sandra, and 7,000 to 8,200 in 7-Zip.

Certainly, there is a performance price to pay for this low-voltage variant, but this is still a strong product that bests the competition easily. In fact, the performance is about on par with normal Core i5 processors from the first generation.

Graphics are handled by Intel’s HD 3000, and as usual it isn’t up to the task of serious gaming. 3DMark 06 returned a lackluster score of 3,316, and Dawn of War 2: Retribution was not enjoyable at the laptop’s native resolution, even with detail at the low preset. Older 3D titles will be playable on this laptop, but buyers shouldn’t expect it to play more recent games at anything besides the lowest detail.

If you want a MacBook Air, but you don’t want OS X or can’t tolerate the $1,300 price tag, the Acer Aspire S3 is a good alternative.

It’s not perfect. Every flaw that was expected of Ultrabooks, including poor performance-per-dollar, lackluster battery life, and limited connectivity can be found in this laptop.

Other competitors may offer better solutions to these issue . We do hope to review more Ultrabooks soon – but they’re also more costly. The 13.3-inch ASUS Zenbook, for example, is $200 more.

Consumers who are looking for an ultraportable in this range should also consider slightly thicker models, including Acer’s Timeline brand, the Asus U series, and Dell’s Inspiron or XPS 14z. All offer better performance-per-dollar, and have better battery life as well. If you’re hooked on the Ultrabook concept, however, the Acer Aspire S3 is a solid entry that won’t cause excessive harm to your savings account.