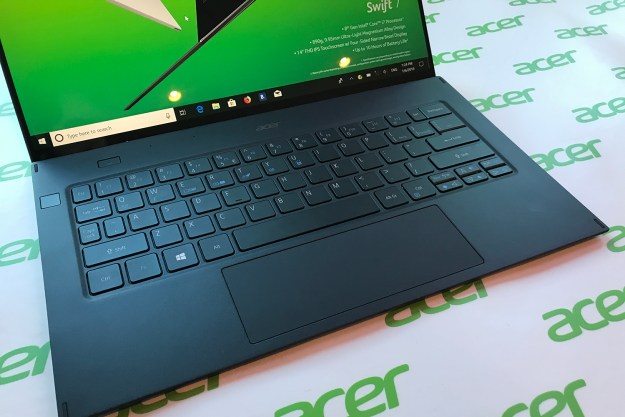 “The Acer Swift 7 is thin, but you need a fat wallet to afford it.”

Acer’s Swift 7 made a name for itself when it launched in 2016 with a body just 12 millimeters thin. That was a new record at the time, and the laptop has slimmed further each year. It was so thin to start, in fact, that Acer has been forced to find other ways to shave down the size – so for CES 2019, the Swift 7 has joined the battle of the bezels.

It’s a serious fight that moved quickly at this year’s CES. We laid hands on the Acer Swift 7 at a morning meeting and, at the time, it claimed a record setting screen-to-body ratio of 92 percent. That was defeated just hours later by the Asus ZenBook S13, which pushed the ratio out to 97 percent.

Timing wasn’t kind to Acer, but the Swift 7’s second-best bezel size remains impressive, melting away for a nearly edge-to-edge viewing experience. Acer also fights back with wins in the Swift 7’s usual selling points of size and weight. It’s just four tenths of an inch thick and comes in under 2.2 pounds. Asus’ Zenbook S13, is a tenth of an inch thicker and weighs about 2.5 pounds.

Opting for a thin bezel display does mean you must settle for a nose-cam. Acer’s solution is placed in the laptop’s lower half, just above the keyboard, and flips up at the press. It’s similar to the Huawei Matebook X Pro, except the camera isn’t disguised as part of the keyboard.

What about the display quality? It’s a 1080p screen that Acer says can handle 100 percent of the sRGB gamut and reach 300 nits of brightness. I had no complaints, but its quality didn’t stand out, either. Past Swift 7 laptops posted respectable results in our display tests, and I suspect this new model will do the same.

Strangely, the thin design of the Swift 7 has never earned it the respect you’d expect. The culprit, I think, is the laptop’s extremely conservative design. It’s a slab of untextured metal with no notable flourishes that might make it stand out from others.

That’s a problem, and it’s more of a problem today than in 2016, when the Swift 7 was introduced. Dell’s XPS 13 forced competitors to think outside the box, and they have. Asus’ has improved its design and now offers a wide range of colors, depending on model. HP has refined its stark, modern design language and is experimenting with use of unusual materials, as demonstrated by the leather-bound HP Spectre Folio. The Swift 7 fades into the background when compared to these peers.

We did find the new Acer Swift 7 robust, though. It’s an improvement over earlier models, which could feel a little flimsy due. Acer also responded to criticism of the previous model’s touchpad by reintroducing an integrated click button. The new touchpad feels great, and it’s huge, providing plenty of space to waggle your fingers.

While the touchpad is better than before, another issue remains. The processor.

The Acer Swift 7 is so thin it lacks room for cooling fans. Ditching them means Intel’s power-sipping Core Y-Series processors are the only viable option. While not painfully slow, the Y-Series’ performance is quite far behind the U-Series, particularly in tasks that use more than a single processor core. The Y-Series is still dual-core, while the U-Series is now quad-core.

Would you notice the difference in light day-to-day use? Maybe not. Yet you’d certainly notice in more demanding workloads. In other machines, the same Core i7-8500Y found in Acer’s Swift 7 takes twice as long as a Core i7-Core i7-8565U to transcode a 4K trailer from h.264 to h.265, and hits roughly half the score in Geekbench 4’s multi-core test. Half the cores, half the performance. No way around that. It’s well equipped otherwise, though, with up to 16GB of RAM and up to 512GB of solid-state storage.

The performance would be less of a problem if not for the price. Acer says the new Swift 7 will retail for $1,700 when it’s released in May of 2019. This laptop has always struggled from a value perspective. Paying hundreds more than a quicker competitor is hard to justify. Acer’s new Swift 7 is the best incarnation yet, but that problem remains.