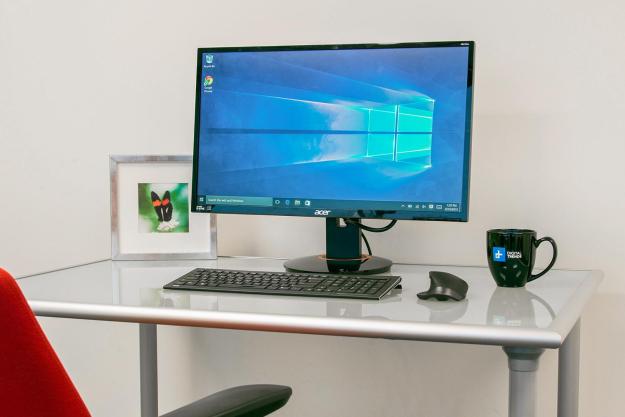 “The Acer XB270HU is a top-notch display with a great feature set for gamers, but the price tag puts it in league with 4K displays, including Acer’s own.”

There’s a growing feeling in PC gaming that 1080p just isn’t enough. Even mid-range systems are maxing out settings on popular games with no issue, but the jump to 4K can be prohibitively expensive. 4K starts around $500, and a dual-GPU computer is required to play games at 60 FPS and high or maximum settings.

Wouldn’t it be great if there was a step between the two resolutions that provided an improved experience over 1080p? There is! The increasingly popular 2,560 x 1,440 resolution is a good compromise for gamers hoping to raise the resolution without turning in their wallets for a new GPU.

The Acer XB270HU offers 1440p on an IPS panel, with all the bells and whistles of a higher-end display, including a 144Hz refresh rate and Nvidia’s G-Sync refresh management. You may not even have to upgrade your graphics card to enjoy solid performance at that resolution. The features aren’t cheap, though, as Acer sells this display for about $800. Is it worth bridging the gap between 1080p and 4K with something more reasonable?

The XB270HU looks essentially the same as other Acer gaming monitors in recent memory, such as the XB280HK. The glossy black plastic is prone to attract fingerprints and gather dust, but cleans easily enough, and is otherwise professional and understated. A touch of orange at the base is the only reminder this is a gaming monitor.

In a world where monitor stands are becoming more and more basic, it’s always refreshing to see one that has some different positions. Not only does the display slide up and down easily, but it also rotates on its base, and swivels 90 degrees for vertical viewing. Ergonomic adjustments are expected at this price point, but not every competitor complies.

The bezel on the XB270HU isn’t particularly thin, but the glossy finish does help minimize its presence. It also helps that the build quality of the XB270HU is quite good. The plastics don’t easily flex, the stand doesn’t spin or slide without your say-so, and gaps aren’t noticeable.

The XB270HU is limited when it comes to connectivity. It features just a single DisplayPort, along with two full-sized USB ports, although you’ll need a separate cable running to your computer to utilize them. Usually monitors, especially 1440p panels that don’t need the newest HDMI standard, will also include at least HDMI, and hopefully DVI, but here you’re stuck with DisplayPort.

If you plan on using G-Sync, that’s not a big deal, because Nvidia’s hardware-based refresh management only operates over DisplayPort.

The controls on the Acer XB270HU look a little mystifying until you actually use them. Just one of the buttons has any markings on it – the power button has an LED to signify whether the display is on – and the others only make sense in context once the menu is pulled up. After you make it past the first set of icons, which range from obvious to cryptic, the menu navigation is easy, and most of the functions are self-explanatory.

The controls look a little mystifying until you actually use them.

In addition to a number of preset configuration scenarios, there’s also a quick option screen for brightness, and two options for extra features included with the monitor. Under the main menu, you’ll find the brightness and contrast settings, both of which are 0-100 sliders, and a gamma menu with Gaming, 1.9, 2.2, and 2.5 settings. Acer’s eColor management doesn’t let you select by temperature, but instead offers a number of preset options. The other sections of the menu let you change OSD settings and control the features of the monitor, as well as view current running information.

The first is an overdrive feature that’s found on higher-end monitors. By upping the voltage applied to each pixel, the response time is shortened as the next image is presented faster. The effects wasn’t particularly noticeable, as it’s intended to prevent ghosting, which isn’t an issue with this monitor anyway. The second feature is Ultra Low Motion Blur, or ULMB, which is the successor the Lightboost.

By turning on ULMB, you’ll cause the backlight to turn on and off at the same rate the monitor is refreshing. The result is a lower image persistence and drastically reduced motion blur, but can also cause flickering and strobing effects depending on the game’s frame rate and your sensitivity. It’s also mutually exclusive with G-Sync. If you have one turned on, you won’t be able to turn on the other, and you’re much more likely to use G-Sync.

Decent out of the box

This 27-inch IPS display boasts 2,560 x 1,440 resolution, which translates to 109 pixels per inch. It also packs LED backlighting, which enables the use of ULMB lighting, as well as giving the display a maximum quoted brightness of 350 lux.

This Acer is a solid choice if money is no object.

Right out of the box, our testing shows that the screen brightness is almost at quoted levels, settling at 342 at 100 percent. In terms of gamut, the XB270HU performs admirably, displaying 100 percent of the sRGB scale, and an impressive 79 percent of the AdobeRGB scale, beating out its 4K cousin the XB280HK by four and eight percent, respectively. Color accuracy was sharp too, scoring an average error of 1.61 without any calibration. That’s solid, as anything below one is generally unnoticeable to the human eye. Gamma was slightly off, reporting 2.3 even with the menu set to the ideal target of 2.2, but the difference wasn’t readily visible to the naked eye.

Playing games on the monitor at its default settings is fun, but nothing special. The high refresh rate means smooth gameplay, especially if you kick G-Sync on. For $800, though, we expected the display to blow us away, and it doesn’t. The other issue is video playback. Almost no videos are produced in 1440p, and instead are either 1080p or 4k. That means most video content will suffer some kinda of scaling issue. It’s not glaring – but 1080p video, for example, tends to look a bit blurry. This doesn’t impact games as long as you set in-game resolution to the appropriate 1440p.

Calibrating the XB270HU provided a modest boost to the monitor’s test scores. Gamma on the 2.2 configuration settled into its proper curve, and the other gamma settings settled in towards their quoted curve as well.

The contrast score dropped a fair bit from calibration, demonstrating that the LED backlight was responsible for the high contrast out of the box. Calibrating reined in color accuracy a bit more as well, bringing it down from 1.61 to a 1.2 average. The smallest difference the human eye can see is about one, so this rating is excellent.

All of the boosts to gamma and color accuracy don’t mean much when it comes to real world use. There’s still nothing that will make you say “wow” when you look at the XB270HU, especially if you’re used to ultra-settings in 1080p, or any level of 4K gaming.

It’s no one specific trait that you can point to and say “that’s wrong,” but for the price of the monitor, the blacks aren’t as deep as they could be, colors don’t pop like they should, although motion is very smooth. The whole experience isn’t unpleasant, but it doesn’t blow the user away as does a similarly priced 4K monitor, or a display with a super-wide color gamut.

Like all of Acer’s monitors, the XB270HU includes a three year limited warranty. That warranty includes 90 days of software support, plus three years of hardware technical support either by carry in or by mail.

Take advantage of the VESA-compatible display by sticking it to any wall you need to.

Nearing the upper end of the Nvidia spectrum, the GTX 970 offers great bang for your buck.

The Razer DeathAdder is a popular gaming mouse option, and the new version includes Chroma backlighting.

Why pay more? The Logitech G230 is a great gaming headset, and will keep you in sync with your teammates.

If you’re looking for a new gaming monitor to upgrade from your 1080p to something higher resolution, this Acer is a solid choice if money is no object. Most gamers have a budget of some sort, though, and the $800 price tag on this display will take a good chunk, if not all, of your graphics card budget.

And it’s not like there aren’t other options at a lower price point. The Asus ROG P278Q offers all of the same features as the XB270HU, and for the same MSRP, but is readily available for less than $700. That’s the only currently available, 27-inch 1440p display with G-Sync, and on paper it’s a solid alternative to the XB270HU (we’ll be reviewing the ROG P278Q in full). Make one concession from the specs on the Acer and you’ll save a decent chunk of change, as well. The Philips G-Sync option is only 1080p, but is also available for $550, and it has a lower response time.

At $800 for the XB270HU, you’re probably better off buying a 4K monitor and waiting until the computing technology is in place to play games on it for less, or upgrading your current 1080p display to a model with a better refresh rate and new features. The Acer XB270HU is quite an impressive screen — but we expect a lot from an $800 monitor, and only gamers who demand the absolute smoothest gameplay experience possible will be willing to spend that much for a 144Hz, G-Sync experience.