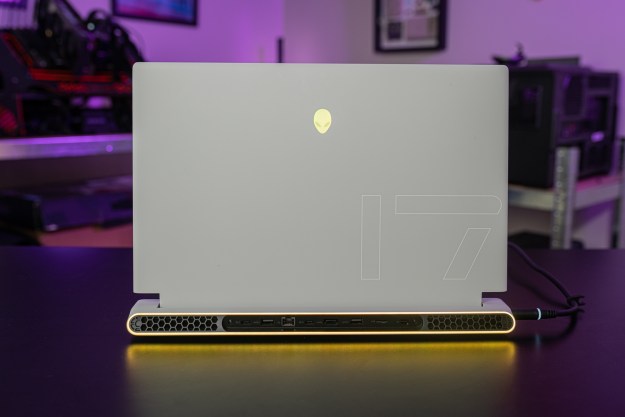 “The Alienware x17 R2 is one of the fastest gaming laptops you can buy, but you might want to skip the 480Hz screen.”

480Hz on a gaming laptop sounds crazy, and in fairness, it is. But Alienware pushed ahead anyway, and we now have the Alienware x17 R2 — the first laptop ever with a 480Hz display. It’s built with hardware worthy of our best gaming laptops roundup, and the screen is configured for the most competitive players.

Unfortunately, the star feature of the x17 R2 isn’t the best thing about it. This is one of the best laptops on the market right now, and no part of that assessment comes from the refresh rate. 480Hz is an achievement, absolutely, but Alienware’s excellent X-series design, highly capable hardware, and stellar software features are what make the x17 R2 a great gaming laptop.

The second revision of the Alienware x17 is really made to accommodate Intel’s 12th-gen processors. You can go from the 14-core Core i7-12700H up to the 14-core Core i9-12900HK. Although I wasn’t able to test the i9 configuration, I’d be shocked if it provided much of a benefit in games, though it should provide a boost in non-gaming apps.

Otherwise, you can go from an RTX 3060 up to an RTX 3080 Ti, pack in up to 64GB of DDR5-4800 memory, and install up to 4TB of SSD storage in RAID 0. My exact configuration, which you can see in the spec table above, clocked in at $3,550 at the time it was shipped. Prices always change, especially if you’re outside of the U.S., so make sure to check prices with Alienware’s configuration page.

If it ain’t broke…

The Alienware x17 R1 was a smash hit, so it’s no surprise that the R2 version sticks with the same overall design. Similar to other X-series laptops like the Alienware x14, the x17 R2 focuses on portability with a thickness of 0.84 inches at the thickest point and a maximum weight of seven pounds.

Yes, this is a 17-inch gaming laptop, so portability takes on a different definition. For a proper desktop replacement, this machine is certainly much more portable than something like the MSI GE76 Raider. You won’t be throwing it in a backpack often, though, due to the size and weight, as well as the chunky charger.

Still, I love this design, and I’m glad Alienware stuck with it. Like the Lenovo Legion 5i Pro, all of the ports are located around the back of the machine, and you have connections like Mini DisplayPort and an Ethernet jack that you don’t typically find on laptops. Alienware keeps everything decently cool as well, sticking with the Element 31 thermal paste featured in the original design and four cooling fans.

Alienware also stayed with the mechanical keyboard design it created with Cherry. The MSI GT77 Titan uses a similar keyboard, and I’m not a fan of it. It’s comfortable to type on, but there’s loud pinging and spring noise that makes long typing sessions tedious. A quality membrane keyboard like the one offered on the Razer Blade 14 is still the way to go. It’s worth noting that Alienware offers a membrane keyboard as an option, but I wasn’t able to try it out.

Although the switches aren’t my favorite, the keyboard layout is great. In particular, the Page Up and Page Down keys are additional functions on the arrow keys, and Alienware uses the extra space for full-size media keys instead.

Most laptops reserve these for the function keys on top. Alienware stuck with the same full-size keyboard design, though, leading to a smaller trackpad and no number pad. Let’s be honest, though: You should be using this machine with a gaming mouse.

I like that Alienware stuck with the same design, but the one pain point is the webcam. It’s 720p, and even with direct sunlight pouring through my windows, it produced a dark and grainy image. The speakers could use some work, too. Although they’re very loud, the increased bass resonance sometimes causes a slight rumbling on the chassis and a bit of distortion at full volume. In fairness, I never had to listen at full volume, and Alienware includes some sound profiles to customize the response.

The Alienware Command Center actually comes stocked with quite a few features, including five thermal profiles. The Balanced and Performance profiles were the most comfortable, while the Full Power preset resulted in very loud fan noise but the best performance out of all of them.

Although the 14-core Intel Core i7-12700H should run below the more expensive i9, that’s rarely the case. Unless you jump to Intel’s HX series of processors, 14 cores is the maximum you can get right now in a laptop, and Intel’s enthusiast-grade i7 still rips through CPU-intensive tasks.

The Core i7-12700H basically matches the 10-core M1 Pro available in the 14-inch MacBook Pro, which few processors can achieve.

This is a testament to the thermal design of the Alienware x17 R2 more than anything else, as the Core i9-12900H in the HP Envy 16 managed a lower multi-core score (though a slightly higher single-core score). The size helps a lot, too, as the x17 R2 was able to outpace the Alienware x14 with the same processor in both single- and multi-core tests.

For gamers, the CPU differences don’t matter too much.

It’s not perfect, though, particularly if you work in creative apps. The Asus ZenBook Pro 16X, for example, was able to outpace the Alienware x17 R2 in Pugetbench for Premiere Pro by nearly 14%, despite using the same processor and a weaker GPU. The higher clock speeds from the Core i7-12800H inside the Razer Blade 17 provided a boost, too, though it’s small.

For gamers, the differences don’t matter too much. Alienware’s design is extracting as much out of the part inside as it can. If you’re a creator that is in and out of Premiere all day, though, or you need strong encoding capabilities, springing for the higher clock speeds of Intel’s more expensive 12th-gen processors can provide some minor benefits.

The Alienware x17 R2 is a gaming monster, even if it takes a slight backseat comared to larger laptops. You’re getting the full power of the RTX 3080, up to 150W with an additional 25W from Dynamic Boost, but you’ll need to run the machine with the loud Full Power preset to get top-tier performance. I tested with the Performance preset, as it was the most comfortable in terms of noise.

Although it’s not peak performance, you’re still getting a laptop that can push above 60 fps in the most demanding games available today. All of the results above are at 1080p with the highest quality preset, and you can see the results for games like Cyberpunk 2077 and Red Dead Redemption 2 that can bring a lot of desktops to their knees.

Ray tracing is possible, too, though mostly on the back of Nvidia’s Deep Learning Super Sampling (DLSS). You can take advantage of DLSS with this GPU, which is a big boost for games that are limited by the capabilities of laptops like Cyberpunk 2077.

There’s a small trade-off in performance for the thinness afforded by the x17 R2. But overall, it’s still a highly capable laptop that can go toe-to-toe with the most powerful mobile workstations available today.

The big deal with the Alienware x17 R2 is that it’s the first laptop to come with a 480Hz screen. That’s what I tested, but it’s not the only option. Alienware offers five screen options, and the 1080p 480Hz model is a $300 premium over the base 165Hz 1080p screen. Unfortunately, most people won’t notice a difference with 480Hz and, frankly, don’t need it.

I wanted to see what games could even take advantage of 480Hz without being CPU limited, and I didn’t find many. Rocket League and Counter-Strike: Global Offensive cracked the ceiling, but even the very light Rainbow Six Siege only managed 308 fps — and that was at 1080p with the lowest quality setting. Similarly, Fortnite didn’t even crack 150 fps, though it’s admittedly much more demanding than the other three games.

You’re going from around 3ms for each refresh to 2ms when going from 360Hz to 480Hz. It’s beyond the point of diminishing returns.

I don’t want to write off 480Hz as nonsense. Like going from 60Hz to 144Hz, there’s a big difference in feel. It’s like watching a string of YouTube videos at 30 fps and suddenly stumbling upon one at 60 fps — everything just feels impossibly smooth, but only for a moment. After you’re accustomed to the higher refresh, it doesn’t feel as necessary. I was perfectly fine going back to my 144Hz monitor after testing, never feeling the massive difference in refresh rate even if I could spot it when the two screens were side-by-side.

My issue is that Alienware offers a 360Hz screen for $200 less, and that’s a lot closer to 480Hz than it sounds. You’re going from around 3ms for each refresh to 2ms when going from 360Hz to 480Hz. It’s beyond the point of diminishing returns, even for the most competitive gamers on the planet. Compare that to going from 120Hz to 360Hz, where around 8.3ms per refresh shrinks down to around 3ms. That’s a much more significant difference.

Outside of the refresh rate, the panel is solid if unimpressive. I measured at peak brightness of 373 nits and a contrast ratio just over 1,000:1, firmly placing the display in the mainstream IPS category. The color accuracy was solid out of the box, though, with a Delta E (difference from real color) of just over 1.

That’s good enough for light color work, but I only measured 98% of the sRGB color space. Those colors are accurate, but an expanded color range like the one offered on the Acer Swift 3 OLED is better for more intense color work.

Should you buy the Alienware x17 R2?

If you’re in the market for a mobile desktop replacement, and you have the money to spend for a high-end spec, the Alienware x17 R2 should be at the top of your list of options. The design is tough to beat, and the hardware inside provides some of the best performance you can get out of a laptop today.

I wouldn’t recommend going with the 480Hz screen, though. It doesn’t do much over the 360Hz option, and your money is much better put toward the other hardware in the machine.

Topics
Best Gaming PC Deals: Save on RTX 3070, 3080, 3090 PCs
HP Envy x360 13 vs. Dell XPS 13: the best tiny laptop?
The best touchscreen monitors in 2023
The best mini-LED laptops for 2023
The 6 biggest problems with ChatGPT right now
Pro users are already unhappy with the upcoming Mac Pro
How to schedule an email in Outlook
15 years later, the MacBook Air could soon have its best year ever
How to watch Super Bowl 2023 on your computer
Microsoft Word vs. Google Docs
Turns out DirectStorage isn’t killing frame rates in Forspoken after all
Best laptop deals: Save on Apple, Dell, HP and Lenovo
Wi-Fi not working? Here’s how to fix the most common problems