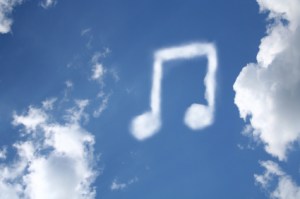 Apple is reportedly in talks with major record companies to negotiate a deal that would allow iTunes users to download music an unlimited number of times to multiple devices, three unnamed sources told Bloomberg. The move would be one stop closer to a cloud-based iTunes.

The companies involved in the talks include the regular big players, Universal Music Group, Sony Music Entertainment, Warner Music Group Corp. and EMI Group Ltd. It is said that they could come to an agreement by mid-year.

Details about the negotiations revealed by the sources further rumors about Apple plans to combine iTunes with its online data storage service, MobileMe.

According to the Bloomberg report, record companies are anxious to offer a streaming service to compete with increasingly popular Internet services like Pandora and Spotify, which allow users unlimited access to streaming music on a wide variety of devices. Most of the rumors surrounding MobileMe point to a new version of iTunes that would allow users to access their music from any enabled Apple device, including Mac, iPhone, iPod Touch and iPad.

The updates to iTunes that are currently being worked out would allow users create a “permanent backup” of their music collections, which would be stored on an Apple server, not on a single personal computer. “The move would be a step closer to universal access to content centrally stored on the Internet,” reports Bloomberg‘s Adam Satariano and Andy Fixmer.

By the sound of this, it seems as though there are a number of hurtles to get over before a true cloud-centric iTunes will become available — and most of those hurtles have to do with maximizing profits for the record companies, and Apple.

Still, things are almost definitely moving towards a more flexible (i.e. cloud) iTunes service. Late last month, Apple announced that would soon open its massive $1 billion data center in North Carolina, and that the facility would be used for iTunes and MobileMe. This reveal further supported an earlier report that MobileMe would become the “focal point” of a new “online music service that Apple has been developing for more than a year.”

How to use Notification Center on a Mac

The best Chromebooks for 2022: Great choices at every price point