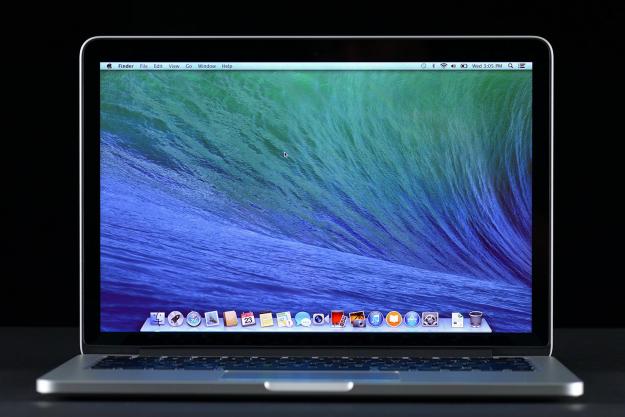 “While the new Pro with Retina isn’t a huge leap forward from its predecessor in anything except battery life, its generous price drop offers good value and makes ultrabook alternatives look over-priced.”

Apple’s MacBook Pro is an institution in the laptop market. Originally released in 2006, the MacBook Pro has been in consistent production longer than any notebook except Lenovo’s T-Series and X-Series laptops, and it has defined the premium market since its release. We use it as a point of reference in our reviews; if a laptop can match or top the Pro, it’s probably going to win an Editor’s Choice.

Yet the introduction of the Retina display left Apple in an unusually precarious position. Pricing on the first 13-inch and 15-inch Pro with Retina started at $1,499 and $2,199, respectively, which was well north of the competition. This gave high-end Windows notebooks like the Samsung ATIV Book 8 and ASUS UX51 a chance to make their mark as legitimate alternatives.

The new Pros, however, enjoy a much-needed $200 price cut. That puts our review unit, a base 13-inch model, at just $1,299. Though still expensive, this is a moderate price for a premium ultraportable. After all, many PC ultrabooks, including the Dell XPS 13 (with 1080p display) and Sony VAIO Pro 13, are more expensive. With the price decreased and the hardware updated to Intel’s latest 4th-gen Core processors, Apple may be back in charge. Has the Pro regained its crown, or can ultrabooks still their case as a comparable alternative?

Yes, another year, another MacBook Pro that looks the same as the last. We’ve mentioned in past reviews that we’d like to see some variety or change in Apple’s MacBook design language, as competitors have begun to catch up with its build quality, but this wish remains just that; a wish.

Apple has at least made the Pro with Retina slimmer and lighter; both the 13-inch and 15-inch versions are now just .71 inches thick, and our 13-inch review unit weighs just 3.46 pounds. That’s easily in ultrabook territory, and the difference between this new model and one built just a few years ago is apparent. On the other hand, though, it’s not a significant upgrade compared to the outgoing Pro with Retina, which was .75 inches thick and weighed 3.57 pounds.

Regardless of what you think of its looks, there’s no denying that the Pro is a well built machine. The chassis feels rock-solid and there’s no hint of flex, even along the display. Though panel gaps exist, they’re virtually invisible. Those on the bottom are easily noticed, but they’re rarely in sight because, well, they’re on the bottom.

Port selection is an area where Apple has improved over the years. The latest Pro has plenty of connectivity to go around, with two USB 3.0 ports, two Thunderbolt 2 ports, HDMI, a combo headphone/microphone jack and a card reader. All of these ports are located near the rear of the notebook’s right and left flank, which means connected devices are less likely to be in the user’s way.

Preserving keyboard quality while reducing a laptop’s size is not easy, but you wouldn’t know that when using the latest edition of the MacBook Pro. Despite its thin profile, the keyboard remains excellent, with plenty of key travel and a spacious, well defined layout. Tactile feel is good, too, as keys bottom out firmly with a soft but audible click.

Backlighting is standard and activates automatically when the webcam senses a low-light environment. Manual control is also available, however, and there’s a total of ten brightness settings. This makes it possible to find the proper brightness in any lighting condition. There is some minor light leak around all of the keys, but adjusting the brightness usually makes this a non-issue.

The touchpad, which measures 4.125 x 3 inches, no longer feels large relative to the competition, as it did when the Pro debuted in 2006. Nevertheless, it remains a smooth experience. OS X’s extensive support for multi-touch gestures remains a point of differentiation that Windows notebooks can’t match and works as well as ever on the latest version of the Pro.

The Retina display may not be the Pro’s newest feature, but it’s still the most noticeable. Apple claims the display’s pixels are too small to be seen at a normal viewing distance – and they’re right. The result is an outlandishly sharp screen that looks more like a sheet of glass with a printed image behind it rather than a computer monitor. The effect is most noticeable when viewing high-contrast text, which looks smooth even when rendering very small font.

Our objective tests are not compatible with OS X, unfortunately, so we used test slides from the Lagom LCD website to get a sense for the Pro’s display quality. We came away pleased; the screen offers good contrast, shows very little gradient banding and provides rich, vibrant color.

The only downside was black level performance. Though blacks have a deep, inky look, some detail is lost in shadowy scenes. When viewing the trailer for The Hobbit: The Desolation of Smaug, for example, areas which should be visible, like the background of Smaug’s lair, were rendered as a smooth shade of black.

The Pro’s speakers are not remarkable, but they offer reasonable punch and do so without distortion, even at maximum volume. There’s some reproduction of bass, though at times we noticed that low-range sounds robbed certain other sounds, like spoken dialogue, of volume. Sound quality is passable overall, but a pair of headphones or external speakers will be a definite improvement.

Updating the Pro with Retina to Haswell is a major and somewhat overdue milestone. The efficiency improvements of this latest architecture from Intel are no secret, and we were eager to see if this latest MacBook can match up to the amazing results we’ve recorded from the latest PC ultrabooks.

The answer is a definitive yes. The Peacekeeper web browsing benchmark drained a full charge in six hours and twenty-three minutes, a result that is just south of the best ultrabooks. Leaving the laptop to idle, however, extended battery life to just over twenty hours. That’s right; over twenty hours. Most users will be placing at least some load on the laptop while using it, of course, but real-world endurance should be between eight and ten hours for most users, and can extend well past that if the system is put under load intermittently.

Surprisingly, the Pro’s power tests showed significant draw; up to 19 watts at idle and 38 watts at load. A typical ultrabook, for comparison, will draw under 10 watts at idle and about 25 watts at load. Given the laptop’s excellent battery life, it seems likely that OS X changes it performance profile when plugged in. This may disappoint those who want to minimize their carbon footprint.

A step forward, a step back

Our base model MacBook Pro 13 with Retina came equipped with a Core i5-4258U low-voltage processor paired with four gigabytes of RAM. This marks a departure from previous models, which have always used a “standard” Intel mobile processor.

To see if this results in a performance hit, we ran GeekBench 3 64-bit, which returned a single-core score of 2,946 and a multi-core score of 6,301. This does represent a slight backwards step, as the previous Pro 13 with Retina could manage single-core and multi-core scores of 3,136 and 6,661, respectively. That’s a decrease of almost 10 percent.

We can’t say this felt noticeable in real-world use, however, as the Pro 13 reacted to our input with lightning reflexes and never showed the animation hitches that are not uncommon when OS X is used on older or less powerful hardware, such as that found in the MacBook Air. Despite the regression in, the Core i5-4258U is quicker than the Core i5-4200U, which is standard in most ultrabooks.

The new Pro is also the first laptop we’ve reviewed with Intel’s Iris, the company’s high-end integrated graphics chip. We tested it using the Cinebench OpenGL benchmark, which ran at 24 FPS, a strong result for an integrated GPU. This may make gamers sit up and take notice, but remember; the extremely high resolution of Retina can cause performance problems because there are so many pixels to push. Those interested in Mac gaming will probably want to leap to the 15-inch model and its optional GT 650M graphics.

Apple has always preferred silence, and the newer, more efficient 4th-gen Intel Core hardware gives the company ample opportunity to pursue that goal. Our decibel meter was never able to pick up a reading from the MacBook Pro 13, even while we ran the Geekbench stress test. Load seems to have no impact on the fan, which whirrs along at an almost inaudible pitch.

Those who pursue silence are often punished with excessive heat, a problem suffered by some older MacBooks. This latest Pro, however, tops out at a maximum external temperature of 97.6 degrees. Though this still results in noticeable warmth, the laptop is never too hot to use comfortably.

The MacBook Pro 13 banishes any questions about its place as king of the ultraportable market. While there are some ultrabooks which match its display, battery life or performance, there are none that can do all three, and those that try (such as Dell’s XPS 13 with 1080p display) are actually more expensive.

In fact, the price drop is the standout feature of the new Pro. $1,299 is still a lot of money, but it’s slightly below the competition’s average MSRP. The Dell XPS 13 with 1080p display starts at $1,349, the Toshiba Kirabook is $1,299, while the Sony VAIO Pro 13 costs $1,499. Remember, the Pro’s processing power is above average and is paired with Intel Iris graphics, while the Windows-based competition typically comes equipped with a mid-range Core i5 and Intel HD 4600.

While the previous Pro with Retina was great, it forced users to pay high prices. The new MacBook Pro with Retina display, however, is an outstanding value, and provides mind-blowing battery life on top of that. Ultimately, the late-2013 MacBook Pro 13 with Retina is a notebook that flirts with perfection.

Topics
Video-editing app LumaFusion to get a Galaxy Tab S8 launch
Best Chromebook deals: Get a new laptop from $99
Apple will pay $50M to settle the butterfly keyboard fiasco
The best laptops you can buy in 2022
Apple’s M2 Max chip may bring next-level performance to the MacBook Pro
This free service just hit a huge website security milestone
Best VPN services 2022: today’s top picks
This stunning DIY gaming PC dream machine is made of glass
This 15-inch Windows laptop is a great buy while it’s just $139
Get Samsung’s 49-inch Odyssey G9 Monitor for under $1,000 today
Why Starlink download speeds are experiencing double-digit dips
Hackers just stole LastPass data, but your passwords are safe
Best laptop deals: Save on Apple, Dell, HP and Lenovo