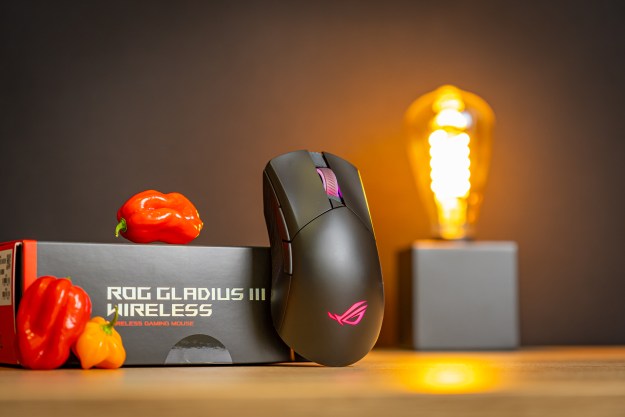 “Asus' Gladius III is a stunning, underappreciated gem of a mouse that bodes particularly well for casual gaming thanks to its comfortable, tactile design.”

Even the best gaming mice aren’t typically known for comfort. That’s a shame, since not all of us are exclusively playing twitchy shooter games all the time.

Today, we’re having a look at Asus’ Gladius III Wireless mouse, which promises both excellent performance and a more ergonomic design.

Though it’s not the most premium option in the line — that’s the ROG Chakram — the Gladius III isn’t cheap. It’s priced at $119 for the wireless version. Fortunately, the Gladius III justifies its price with user-replaceable switches, a great sensor, and a comfortable grip.

The Gladius III’s design is one that’s clearly optimized for comfort, with a large, bulbous body that presses well into the palm of your hand. This larger size, paired with the right-handed design, makes it among the more comfortable mice I’ve tested. It’s not meant to be claw-gripped or finger-tipped as much, but this might make a healthier option than something like Razer’s Orochi V2 and Logitech’s G Pro X Superlight.

As far as comfort goes, the closest match I have found to Asus’ pointer is Razer’s Pro Click, and although that isn’t strictly a gaming mouse — as is obvious by its lack of RGB — it’s kind of a wolf in sheep’s clothing, as it does pack solid switches and a great sensor.

Razer’s mouse has a better overall shape, though. The pear shape with the bigger bottom of the Gladius requires you to fully grip the mouse; grabbing it slightly lower as a fingertip mouse will have it pointed slightly to the left.

Comfort aside, the Gladius III doesn’t present itself with a host of premium materials. The plastic is soft, and the debossed artwork on the left and right sides acts sufficiently as grips for picking the mouse up.

At just 89 grams, it’s also light. That’s not super-light territory, but — at under 100 grams for a large comfort-oriented pointer such as this one — it’s respectable.

RGB illumination is also present in three zones: the main logo, the scroll wheel, and thumb rest artwork. Connectivity is provided by an included 2.4GHz dongle, Bluetooth, and USB-C.

Popping under the mouse’s hood — this time not metaphorically — we find a handful of interesting features. First-off, the mouse’s main sensor is one that tracks at up to 19,000 DPI, though it does have a tune to 26,000 — rated to track accurately at up to 400 inches per second at up to 50 g maximum acceleration. I don’t have the testing equipment to verify these numbers, but I can attest to accurate tracking in more intense gaming sessions.

There is a more compelling reason to get the Gladius III though: You can, quite literally, take off its top shell — the hood — and replace bits internally.

To remove the top, you simply remove two rubber gaskets from the bottom, undo two screws, and pull off the hood. From here, the mouse’s internals are fully exposed, though the only thing you’re meant to do here is to replace the primary switches.

The Gladius III comes with Asus’ own ROG 3-pin Micro-switches preinstalled from the factory, but it also ships with a set of 5-pin Omron D2FP-FN switches. The former are mechanical, but the latter are optical — hence the extra pins — removing the need to account for debounce and theoretically leading to faster performance.

In practice, I find that the difference is mostly down to the clicking action. The default ROG switches aren’t bad, but the optical Omron switches absolutely feel and sound better. The click is a smidge lighter, certainly more distinct, and sounds less dampened.

The catch is that they’re pingy in their sound, which can get annoying.

When I reverted to the ROG switches, I found them feeling a bit soft and mushy, so I’m keeping the Omron’s on to enjoy their sharpness. The scroll wheel is also pleasantly notchy, so they match well.

The fact that the mouse supports hot-swappable switches at all, though, is significant. For the most part, Asus is the only company doing this. Most mice cannot be opened up to begin with, and when you do, the switches need to be desoldered to swap.

Asus also includes a set of four replacement glide pads for the mouse, which help extend the mouse’s service life. Being this easy to open up, I can also imagine that replacing the battery is also possible, provided you find a compatible replacement when you need it.

That being said, there is a reason most gaming mice aren’t sculpted for comfort: competitive gaming performance. Although I was still good at Insurgency Sandstorm when using the Gladius III, I wasn’t as good as when using my previous all-time-favorite, the Logitech G Pro X Superlight, and I think that’s down to the shape and weight. The Logitech has a shape that demands a more aggressive grip, and it’s much lighter at 63 grams instead of 89 grams.

It’s not a huge change, but this does make a noticeable difference in competitive games: I didn’t feel quite as in control.

However, when I switched to Mass Effect Legendary Edition, this performance disparity between the two mice instantly disappeared. In this more story-focused game, I vastly preferred the Asus mouse – my sensitive hands thanked me for taking a break from the G Pro X. I didn’t feel hampered by the mouse the way I did in a competitive game.

The Asus ROG Gladius III Wireless is an excellent gaming mouse that is clearly geared toward use with more casual games and toward players who put in long hours in virtual worlds with a mouse that won’t punish them for it. I’ll go as far as saying that it’s 80% as comfortable as a truly ergonomic mouse, such as the MX Master 3, while being 90% as effective in-game as the G Pro X Superlight. If you primarily play single-player titles, the Gladius III is certainly a mouse to consider.

Tack that onto it being a serviceable and tunable mouse with user-replaceable switches, and I wonder, “Why isn’t this clicker more popular?” The Gladius III is, in my book, an underappreciated gem.

If you’re looking for a mouse with a proper and bulgy ergonomic shape, the only real alternative that comes to mind is the Razer Pro Click. It’s $20 cheaper but doesn’t have RGB or hot-swappable switches, and it’s only available in white. Other ergonomic mice such as Logitech’s G502 Lightspeed or Razer’s Basilisk are too narrow and aggressively sculpted to match the Asus for comfort.

Normally, I won’t say that a mouse lasts past three to five years, but with replaceable parts, I could see the Gladius III lasting well into a decade. Whether you’ll still be using it then is another question.

Absolutely. If your main focus is story-based gaming, and you make long hours at the PC, your right hand will thank you for using one of the most comfortable gaming mice with a palm grip.

Topics
Asus’ 4K, 32-inch mini-LED gaming monitor might hit the perfect sweet spot
These are all the new mini-LED gaming laptops announced at CES 2023
CES 2023: Asus’ new 27-inch OLED monitor hits the sweet spot for gamers
The ROG Flow X13 redesign makes it even thinner, even more powerful
The best Chromebooks for 2023
Best microSD cards in 2023: top picks for your computer, camera, or drone
The best game-streaming services for 2023
Ranking all 12 versions of Windows, from worst to best
If you think PCs are dying, you haven’t been paying attention
What is ChatGPT Pro? Everything we know about its response to capacity issues
I built a couch gaming PC that puts the PS5 to shame — and you can too
AMD Ryzen 7000: availability, pricing, specs, and architecture
ChatGPT: how to use the viral AI chatbot that’s taking the world by storm