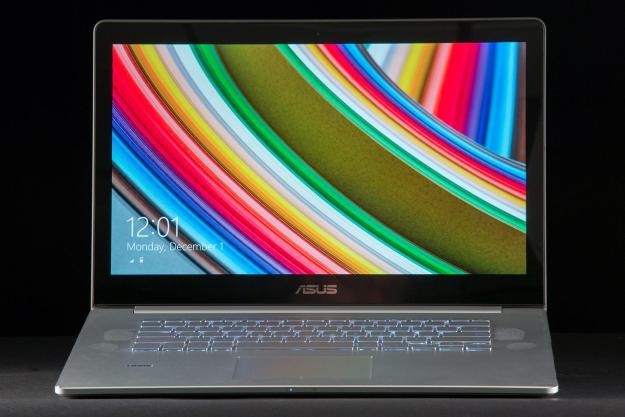 “The Zenbook NX500's combination of powerful hardware and a 4K display seems ideal, but numerous small flaws drag it down.”

Acer’s 4K Aspire V15 was just the beginning of a new display war, and now Asus has joined the battle with its Zenbook NX500. It ups the ante by pairing 4K resolution with Quantum Dot technology, which helps each of those 8.2 million pixels produce deeper blacks and richer color.

Inside the Zenbook lurks equally impressive hardware. The review unit arrived with an Intel Core i7 quad-core, 16GB of RAM, a 512GB solid-state drive, and a GTX 850M graphics chip. That easily puts the system on even footing with the Apple Macbook Pro 15 and Acer’s Aspire V15 Nitro Black Edition.

Cutting-edge technology isn’t cheap, however. The NX500 reviewed here, which represents the only configuration available at launch, came attached to a $2,699 MSRP. That’s right; the new Zenbook is actually $700 more than a base Macbook Pro 15 with Retina and $900 more than Acer’s Aspire V15. Is this the ultimate Windows notebook, or just an easy way to run up your credit card?

Elegance at any cost

Asus hasn’t taken its design in a new direction with the NX500. Like previous Zenbooks, the system has an eye-catching metallic display lid with a subtle circular texture that catches and reflects light. No one will mistake it for a Macbook.

While it’s closed, at least. Opening the display reveals a matte silver interior and a glossy edge-to-edge glass screen that’s almost identical to Apple’s design. The only difference is a subtle speaker grille integrated around the keyboard. It’s a nice touch, but easy to miss from more than a few feet away.

The Zenbook doesn’t feel quite as solid as Apple’s competitor. It’s in the same league as the Dell XPS 15 Touch, however, and far better than Acer’s uninspired V15. Very few competitors feel as sturdy.

Though slim and elegant the NX500 is also functional. Three USB 3.0 ports adorn its flanks. They’re joined by HDMI and mini-DisplayPort for video-out. An SD card reader and a combo audio jack round out the physical connections.

That means Ethernet is not included, an unfortunate but unsurprising omission (past Zenbooks have made the same call). Asus makes up for it with an 802.11ac Wi-Fi adapter that supports up to three data streams for one gigabit of total bandwidth. Bluetooth 4.0 is standard, as well.

There’s one feature of this otherwise brilliantly designed notebook that keeps it achieving from true greatness: the keyboard.

It has two problems. First, it’s silver, and the layout doesn’t look or feel substantially different from Asus’ budget notebooks. Key caps seem cheap, even tacky, and their lack of substance is made more notable by the sturdy chassis surrounding them.

No one will mistake the Zenbook for a Macbook – while they’re closed, at least.

Second, the keyboard isn’t great to use. The ergonomics are fine, but keys don’t have much travel and bottom out vaguely. The backlight, which offers three levels of brightness, does a poor job of lighting keys evenly. There isn’t much light leak, at least.

The touchpad is better. While its default sensitivity feels a bit too high it benefits from a slick, responsive surface. Tap-to-click works well and multi-touch gestures are easy to activate. Asus could’ve made the surface larger, as it measures just four inches wide and three inches deep, but doing so might have caused problems with unintended key activation. Its current size is large enough and doesn’t get in the way.

A key trait of the Zenbook’s 4K touchscreen is the use of Quantum Dots, a display technology that improves the accuracy of backlit displays with millions of tiny nano-semiconductors that emit light at specific wavelength when hit with blue light. Though similar in purpose to a traditional LCD color filter, Quantum Dots are more efficient and produce more accurate color.

In tests, the NX500 rendered 100 percent of the sRGB gamut and 96 percent of the AdobeRGB gamut. The latter figure is good enough to tie Samsung’s $2,000 U970HD 32-inch monitor for the best we’ve ever recorded. The Acer Aspire V15 Nitro Black Edition, for comparison, only hits 73 percent of AdobeRGB.

The contrast ratio came in at 760:1 with the display at its maximum brightness of 320 lux. Only a handful of super-premium notebooks, like the Dell XPS 13, are better. Gamma was a near-perfect 2.1 (off the target of 2.2), lending plenty of detail to shadowy scenes.

Color accuracy was astounding, too. We measured an average color difference of just .43. A difference less than one is generally considered unnoticeable. Even Samsung’s 32-inch 4K monitor can’t beat that.

Colors were shockingly vibrant, as if objects were ready to leap off the screen. That’s not entirely a benefit. While attractive, comparing the NX500 to other laptops made it clear the system’s wide color gamut does not always render images as intended.

Quantum Dots achieve the widest color gamut we’ve ever seen in a laptop.

This is because the laptop’s wide color gamut displays hues most artists don’t work with (as they’re well outside the sRGB spectrum). We found the issue most noticeable in games; the creeping blue mist in Diablo 3’s title screen, for example, looked like Las Vegas neon, rather than the ghostly glow intended.

Asus includes a software utility called Splendid that allows color temperature calibration. We found reducing color temperature helped tame some hues, but what the notebook really needs is a way to selectively limit the color gamut when users desire.

Glare is problematic as well. Even at maximum brightness, office lights are easily visible, which distracts from otherwise brilliant, sharp media. Even the Macbook Pro with Retina, known for its highly reflective panel, is less mirror-like than the Zenbook.

The built-in speakers live up to the display with clear, loud audio that’s usually free of distortion. Unlike many competitors, the NX500’s speakers face upwards and towards the user, which prevents the surface the notebook sits on from muffling or altering sound quality.

Asus ships the NX500 with a Core i7-4712HQ processor clocked at 2.3GHz with a Turbo Boost maximum of 3.3GHz. It’s a chip that balances power with portability with mixed results.

OK, so the NX500 is actually the slowest of these four in Geekbench, but that’s only because its competition is stiff. Acer’s Aspire V15 Nitro Black Edition, the most relevant competitor, is slower in the single-core test but wins the multi-core benchmark by over 1,000 points. The Acer we tested had the i7-4710HQ, which sounds slower, but is actually 200MHz quicker in both the base clock and Turbo Boost maximum.

Zenbook fans disappointed by processor performance shouldn’t fret; the hard drive provides vindication. The 512GB SSD in our review unit transferred up to 1,112 megabytes per second in sequential reads and 924.2Mbps in sequential writes. That’s twice the speed of the Aspire V15 Nitro Black Edition, which scored 487.3 and 411.9, respectively.

The Asus also packs a GTX 850M graphics chip from Nvidia with 2GB of GDDR5 video memory. It proved a notable upgrade over Intel’s integrated graphics but fell short of the GTX 860M in the Acer Aspire V15.

Acer’s less expensive notebook delivers almost 20 percent quicker performance, beating the Zenbook’s Fire Strike score of 3,292 with its own result of 3,610. The NX500 leaves the XPS 15 Touch in its dust, however, and almost doubles the Dell’s Fire Strike score.

Diablo 3 played at an average of 103 frames per second with details set to low and resolution set to 1080. Changing detail to maximum reduced that figure to a still playable 66 FPS. Both settings were perfectly smooth.

4K proved demanding, however, and the game ran at just 33 FPS with detail set to low. At high detail it averaged an unpleasant 23 FPS. That’s meaningfully slower than the Acer Aspire V15 Nitro Black Edition, which hit a more tolerable 31 FPS at and maximum detail. Gamers will need to play at 1080p to enjoy high framerates on the NX500.

Whether the NX500 is good for travel is up for debate. The system’s five-pound weight isn’t bad for a 15.6-inch notebook and the chassis is only seven-tenths of an inch thick. The Macbook Pro 15 and Dell XPS 15 Touch are both lighter, but only by a few tenths of a pound, and are similarly thin.

The massive battery leads to adequate, but not amazing, endurance.

The real problem facing this notebook is not weight but battery life. 4K displays hog power; the Acer Aspire V15, for example, lasted only two hours and 12 minutes in our battery test.

Asus does better, doubling the Acer’s result to hit four hours and 37 minutes. That’s still short of the XPS 15z’s six-hour run time but it’s at least a usable figure. The secret weapon behind the result is a massive 96 watt-hour battery, the largest we’ve ever seen in a notebook.

Our wattmeter made it clear the battery deserves credit. At idle and 100 percent brightness the NX500 ate 24.4 watts, one watt more than the Acer Aspire V15. The Asus consumed 69.2 watts at full load, 20 less than the Acer, but still far more than an average Ultrabook. The Toshiba Satellite Radius 15, for example, needed no more than 41.5 watts.

At idle the Zenbook emitted a peaceful 34.4 decibels of fan noise: barely noticeable in all but the quietest room. At load that increased to 40.8dB, almost two decibels louder than the Acer Aspire V15 but quieter than most notebooks we’ve recently reviewed.

External temperatures were moderate despite the lazy fan. We measured a maximum of 85.9 degrees Fahrenheit at idle and 103.9 degrees at full system load. Both figures are a few degrees higher than the Acer Aspire V15, which warmed to 82.6 degrees at idle and 100.4 degrees at load. The numbers are below most powerful notebooks, however. Dell’s XPS 15 Touch, for example, hit 116.9 degrees during performance tests.

The Zenbook NX500 is a bold addition to the company’s lineup. It’s the most powerful and most expensive Zenbook ever produced. We thought the previous model’s $1,949 price was high, but the new entry’s $2,699 MSRP makes it look like a bargain.

What you get in return for shelling out almost three grand is a device that pushes the limits of Windows notebooks. The 4K display is the most accurate we’ve ever tested, the speakers are loud and meaty, and the battery is absolutely gigantic.

Once the wow of quantum dots and 4K wears off, however, the warts become noticeable. The screen’s wide gamut can make images look too vibrant, battery life is still just mediocre and performance, while solid, falls behind the far less expensive Acer Aspire V15.

The new Zenbook is not a bad choice for buyers who want a 4K laptop that’s adequate for travel, but the price is a bitter pill to swallow. Only diehard display fanatics should attempt to choke it down.

Topics
This 8K monitor has 3D tech that can be viewed from all angles
Best 2-in-1 laptop deals: Save on Dell, Lenovo, HP and more
All of Samsung’s videos from today’s Galaxy Unpacked event
The Galaxy Book 3 Ultra is Samsung’s most powerful laptop ever
Dell is having a big sale on business laptops — up to $2,500 off
Ends soon: sign up for NordVPN today and save up to 62%
New AMD laptop CPU destroys its predecessor, winning by 90%
Lenovo is practically giving away this 2-in-1 Chromebook today
This micro-LED advancement is exactly what AR and VR needs
An AI-generated TV channel is mimicking ’90s sitcoms to nightmarish effect
LastPass vs. 1Password: should you switch?
How to overclock Intel’s Arc GPUs for better performance
I asked AI to recreate the best Super Bowl commercials — to hilarious and horrifying effect